Gibson’s Bakery Will Have to Wait To Collect: Ohio Supreme Court Grants Stay of Enforcement of Judgment Against Oberlin College

Gibson’s Bakery Will Have to Wait To Collect: Ohio Supreme Court Grants Stay of Enforcement of Judgment Against Oberlin College

The bakery, which is on the verge of going out of business after almost 6 years of boycott by the Oberlin College community, will have to try to hang on in what could be months or years more of litigation. 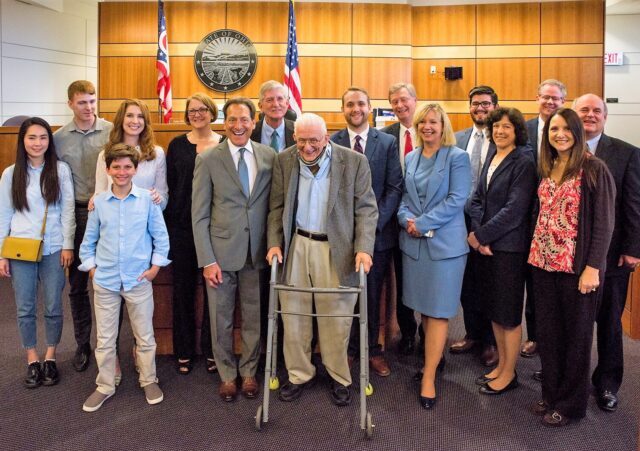 We have covered exhaustively the Gibson’s Bakery v. Oberlin College case, from the moment of the shoplifting and protests throught the trial verdicts and now on appeal.

The most recent activity was that after the Gibsons won in 9th District Court of Appeals, they sought to collect on a $36 million bond posted by Zurich American Insurance under contract with Oberlin College, to secure the judgment. The argument was that since there appeals court directed the trial court “execute” on the judgment, and there was no stay of the appeals court order by the Ohio Supreme Court, the Gibsons could collect on the bond.

This is a serious situation, because Oberlin College’s litigation stalling tactics combined with a continued college community boycott of Gibson’s Bakery (now approaching years), the bakery is on the verge of going out of business.

Bad news for the Gibsons. In a ruling that procedurally is not very surprising, the Ohio Supreme Court just granted the college’s motion for a stay. 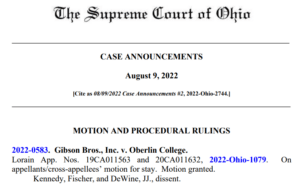 It’s not procedurally surprising, because stays pending appeal are common, almost routine. The mystery was why the college didn’t seek it immediately, and waiting until the Gibsons attempted to collect on the bond. I would not read anything from this stay into how the Ohio Supreme Court will view the merits, or whether it even will hear the case.

What’s interesting is that three judges dissented from granting the stay: “Kennedy, Fischer, and DeWine, JJ., dissent.” That’s three of the seven justices.  I don’t know what to read into that because I’m not sufficiently familiar with the court members. My gut tells me the court will hear the case because it has become so famous, but on the merits there’s really no reason for the court to take it.

Two of the senior members of the Gibson family — “Grandpa” Allyn and his son David — died after the trial but before the family has collected a penny. The bakery, which does shipping orders, will have to hang on some more.

The Ohio Supreme Court has yet to issue a ruling on whether it will agree to hear either Oberlin College’s appeal or the Gibson’s cross-appeal.

No one shall be allowed to question the racism narrative.

The fix was in.

Delay enough and when they go out of business the courts can say the case is moot.

No, it wouldn’t be. The plaintiffs or their estates would still exist.

Yeah, but justice delayed is justice denied, as they say. There’s very little joy in saying, “Hey, Great-great-grandpa’s case against the college finally paid off. Accounting for inflation, we got… enough to buy lunch.”

That’s not the point. The point is that no matter how long it takes it can’t be dismissed as moot. That’s all.

I pity those who ever got excited by this David and Goliath story. Sentimentality is weakness. Those raised watching Perry Mason should grow up. Stay out of hospitals and courthouses.

I pity people who just give up because it’s hard

Your first thumbs up is because I missed

And you’re rooting for Goliath, it seems.

Milhouse is that you

every election has consequences

Another miscarriage of justice.

What is this “justice” thing about which people speak?

It’s only for loyal Democrats. And you don’t get to define loyal.

It is now referred to as “social justice,” and has little to do with fairness or equality.

Seems to me this is exactly why the “speedy trial” clause exists – elites and favored entities using the machinery of the judicial system to crush their opponents when they can’t win on the legal merits.

There needs to be a counter-suit entirely on that basis.

Why – aside from literalism – would civil trials be excluded from the concept?
Speedy trials would include appeals, IMHO. At least if the concept is that you can’t just drag out prosecution (or suing) in order to make the process the punishment.

If the law says you can drag out civil suits but not criminal proceedings, then the law certainly IS an a**. And it is evil, to boot.

Because that’s what the constitution says.

Speedy trial is not a concept. It’s a concrete right protected by the constitution. And it applies only to criminal trials. I’ve never heard of any country where there’s a right to a speedy trial on a civil matter.

That applies to criminal cases not civil cases.

And only if you don’t commit your crime on the sixth of January.

Those are political prisoners, in jail because the left hasn’t built the work camps yet.

I live pretty far away. But still just clicked on the link in the article and bought some of their merch. I’ll do my small part to keep them afloat if possible.

Bought a T shirt a couple of weeks ago. Received it with a nice hand written note from a family member in a few days. Well worth it. Wearing it is like having a secret MAGA hat that only certain people can see.

So I bought some stuff because it would be a shame for that fine old establishment to go out of business because of the lies and arrogance of a much less productive institution.

I may order some buckeyes and have delivered to Oberlin with a message similar to “Choke on it”, but I’m afraid the Gibsons would bear the brunt of it.
But seriously, I want Oberlin to feel the pain.

So does this mean if anyone in Ohio has to pay due to a case like Oberlin College they can just say no? It seems the Ohio Supreme Court said yes.

No, that’s not what it said. It said when you appeal you can get a stay on paying. That’s completely normal. The odd thing in this case was that they hadn’t applied for one in the first place. Well, they corrected that error, and a bare majority on the court let them get away with that; I guess the minority were of the opinion that the college had had plenty of time to ask for the stay and didn’t, so now it should be too late.

Unfortunately, CJ O’Connor, nominally a R, has recently sided with the Ds on the court as much as the Rs, specifically in approving the redistricting of Congressional seats. I wonder if she’s setting herself up to take a cushy job after she retires.

If Oberlin break the bakery and it goes bankrupt, do they still have to pay? Two of the family are already dead, but I can’t recall how, or to whom, Oberlin was required to pay compensation.

Yes. There are still “interests, assigns, heirs, etc” who can collect. Your insurance on your mortgaged property has a couple of acronyms on the mortgagee’s name – ATIMA and ISAOA. “As Their Interest May Appear” and “Its Successors And/Or Assigns.” Same concept, just with the business.

The whole story is both disgusting and heartbreaking. I hope Oberlin collapses.

Speaking as an Oberlin grad, it already has. I’m ashamed to be a graduate of what was once one of the finest liberal arts schools in the country. Now. it’s indistinguishable from a re-education camp.

agreed
class of ’91. Will support Gibson’s with online orders.

Why do we tol;erate a court system that takes years and years to solve a problem? There is no justice system for most of us, we do not have the time or money for this and so we settle. 97% of al people charged with a Federal crime accept a plea rather than go to court. It would bankrupt anyone so you do not have “equal justice under the ;aw”…..you have prosecutorial discretion. We can all be charged.

And yes I know this is a civil case but the point is the same. Justice delayed is justice denied.

Gibson’s is going bankrupt because of the boycott, and their online venture isn’t paying enough. That isn’t going to change, even when they do finally prevail. The payoff will forestall bankruptcy, but it isn’t going to change their local economics. I wonder what their business plan going forward is?

If I were them, I would move my business in another town (not necessarily in another state).
“Ich bin ein Oberliner”.

Oberlin wants all the Gibson’s to die. I hope the interest is compounding by the day.. I don’t see why Zurich didn’t cut their losses. Oberlin’s a loser.

Meanwhile, can’t the Gibsons ask for a loan of say 1 million, taking the all but sure collection of the 40+ as a grant to the bank?

Overlain is looking for delay in hopes Gibsons will go bankrupt. Justice delayed is Justice denied, yet the courts drag along at their snail’s pace.

My guess is that once the Gibson’s are bankrupt and sell their property to diminish their debt, Oberlin will buy it at fire sale prices and convert their store to:

A Center for Pro Bono lawyers to represent Black Felons;

A Center to address the racism of Small Business;

A Center to fight racism in college admissions;

A Center to protect White Privileged Endowments From Taxation and Judicial Orders;

A new Woke Store run by the College.

Appears the donors to oberlin hold more sway with the Supreme Court and the msm stooges than one family savaged by social justice warrior tools.

Liberal arts people must have something wrong with their reasoning abilities, which may account for the things they fall for. I once thought that it was a simple lack of information, but it must be more because they can’t extrapolate and see the world they would create. Even though history is littered with examples of the pattern of failure. I’m left with just stupid.
Anyone care to help me here? I’m truly at a loss to understand.

Kennedy, Fischer and Dewine are running for the Court as Republicans this fall. Kennedy is running for Chief Justice. The current Chief Justice, Maureen O’Connor, was elected as a Republican but has some kind of strong vendetta against the Republican Party. She is continually ruling with the remaining judges who are Democrats, many feel out of some kind of personal spite. The recent kerfluffle concerning our redistricting and primary is an example.