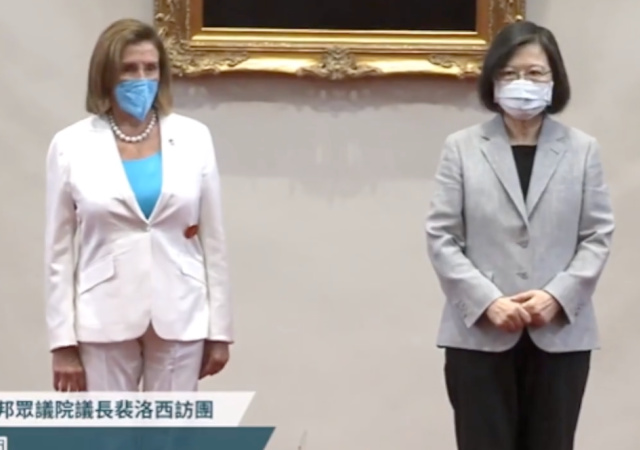 China has retaliated against Taiwan over House of Representatives Speaker Nancy Pelosi’s visit by restricting trade with the island nation on several key items.

Chinese commerce and customs authorities said on Wednesday they had halted exports of sand, a key material used in construction, and imports of Taiwanese citrus fruit and some types of fish.

China’s General Administration of Customs said the food imports were halted due to the presence of pesticide and the coronavirus in some shipments, while the Ministry of Commerce said it had suspended sand exports in line with unspecified legal provisions.

The restrictions include sand, which is an essential component in Taiwan’s semiconductor manufacturing industry. It is important to note that Taiwan manufactures roughly 50 percent of all the world’s semiconductors.

At least Pelosi discussed plans for bringing some of that industry to the US during her brief visit.

Nancy Pelosi did not have much time to spare in Taiwan. But on the Speaker of the House’s controversial visit, she made sure to meet with one of the self-governing island’s most important business leaders, Mark Liu, chairman of Taiwan Semiconductor Manufacturing Co. (TSMC), the world’s biggest chipmaker.

Pelosi included Liu on her short list for good reason. TSMC is the world’s most valuable semiconductor manufacturing company with a $426 billion market cap. The firm produces the world’s most cutting-edge chips, making semiconductors that Americans depend on every day to power their iPhones, medical equipment, and fighter jets.

During the meeting, Liu and Pelosi discussed the U.S.’s recently passed CHIPS and Science Act, according to Taiwanese media. The new legislation includes $52 billion to support chipmaking in the U.S., and TSMC will likely be among its beneficiaries as a result of the $12 billion chip factory it’s planning to build in Arizona.

In response, Taiwan is downplaying the impact of China’s suspension of natural sand export to the country.

The bureau added that improved dredging efforts at rivers, streams, and reservoirs mean that Taiwan is reducing its reliance on sand imports. A total of 48.85 million tons of sand and gravel is expected to be produced this year in Taiwan.

Stressing that domestic demand will not be affected by the move, the Ministry of Economic Affairs said the shortage of sand in the northern region will be met by supplies from the northeast, while the country is also looking to increase its imports from Southeast Asia.

Even Pay, an analyst at consultancy Trivium China in Beijing, said more trade disruptions can be expected between China and Taiwan while tensions remain high. She said it was “common practice” for Beijing to identify minor compliance issues and enforce rules very strictly with trade partners, citing the example of Canadian canola after Meng Wanzhou, chief financial officer of Huawei Technologies Co., was detained.

“It looks like stepped up military exercises announced Tuesday night may disrupt shipping in the region through Sunday at least, particularly into ports in Taiwan and Fujian, but also for any cargoes that might typically pass through the area around Taiwan,” said Pay.

However, any disruption will worsen the current shortage of chips that are already impacting many industries.

The global semiconductor crisis isn’t going anywhere anytime soon, but the chairman and CEO for tier 1 auto supplier Bosch hopes the path out will be clearer in late 2023.

In an interview with Automotive News, Bosch chairman and CEO Stefan Hartung said it was impossible for global chip shortages to be resolved this year.

“There will be another important step next year because there will be a change in the economy in general that will impact the demand side of the question,” said Dr Hartung.

North Vietnam likely can supply the sand required. Japan will buy the citrus and fish provided the quality is top notch.

Calm down. Taiwan Semiconductors has been building a multi-billion semiconductor factory in Paradise AZ. It is huge. Pemex is straining to meet demand for concrete on that project.

You can bet that if China invades Taiwan, there will be harm to us of destroying any facilities before evacuating. You can also bet that any new generation chips will be produced in the US. The transfer of technology production is rapidly returning to the US.

Egad, Pelosi looks awful in that pic. And that’s with half her face covered. Honey, whomever told you that suit looked good on you is not your friend.

She looks like a saggy old bag lady all she needs is a shopping cart full of empty cans.

Cans of what? Raid?

North Phoenix, rather.
Good news, since we have sand up the wazoo.

The greenies would fight that due to endangering the rare puce & teal sand louse. The last (only) time anyone ever saw one was when Wazoo Walter tied on a real humdinger at the local saloon.

Paradise Valley is North Phoenix so you’re both correct.

The world in the past 50 years has gotten so used to cheap and fancy products, nonstop innovation, etc. That’s all coming to a screeching halt.

Don’t forget to find a Democrat and thank him (her) for that.

I’d say it’s going to be on pause. Once things are sorted out and Trump is back in office the rebuilding will begin.

The US is can depend on itself for very vital industry there is. Just takes willpower. Even so, building a chip factory here is one of the most expensive projects you could do, as Pasadena Phil has pointed out.
Texas Instruments is building a new chip plant up the road from me, billions of dollars of investment. Restarting our manufacturing in other areas will take a while and be costly. Mexico will probably be our new China instead. The rest of the world will be a mess, that is the scary part.

I don’t expect it to happen overnight.

A booming economy is created when the building starts. The USA could create prosperity beyond most peoples imagination. Trump policy was turning the theory into reality. What scared the deep state the most was that the average middle class American might discover that everything they have been sold was horseshit.

I would say Barry is right.

China can’t sanction Taiwan but so much. There is considerable trade between the two, political tension and military threats notwithstanding. That trade includes considerable financial dealings; Taiwanese industrialists have invested plenty and China right now can’t disrupt the cash flow.

This is just posturing.

Taiwan can mine sand from artificial Chinese islands.

LOL, the feckless chinese are going to force the Taiwanese to buy their paltry share of sand somewhere else.

I’m just wondering who and how many Xi is going to have executed for this total fuckup. And that’s what it is. They thought the potato ran this country like every other dictator and would bend over. Well, he bent over, but the rest of us just laugh.

There is a long string of American politicians, the good, the bad, and the ugly (hey, pelosi ticks of the last two), visiting Taiwan without China making such a laughable production of it.

“There will be another important step next year because there will be a change in the economy in general that will impact the demand side of the question,” said Dr Hartung.

Western central banks are working to push economies into contraction to reduce the demand for energy, to match their countries’ political leaderships constriction on energy supply. This is how the Green New Deal is being applied. Managing inflation caused by the political constraints on energy by crashing economies to reduce demand, in order to save the planet.

China’s economy is teetering on the brink of systemic collapse right now.

It needs only a little push. Imagine what would happen if we had someone other than a corrupt traitor as the white house resident.

The problem is that as much as I’d prefer a mainland chinese civil war over an attempt to invade taiwan, the breakup of china is going to make the breakup of the soviet union look organized.

I wish I had a better idea of what warring factions will exist in china when their economy collapses, but they’re awfully good at disinformation warfare.

As long as most of the CCP is hung from lampposts, I’m good with it. Freedom is won with blood. Copious amounts of blood. Always has been.

Big trouble ahead as the chinese have sanctioned the USA for the pelousy trip.

They are going to refuse to dialog about –

Got that, the wily chinese are really hurting the biden misadministration.