“While Texas secures the border, the federal government is enabling illegal immigration.” 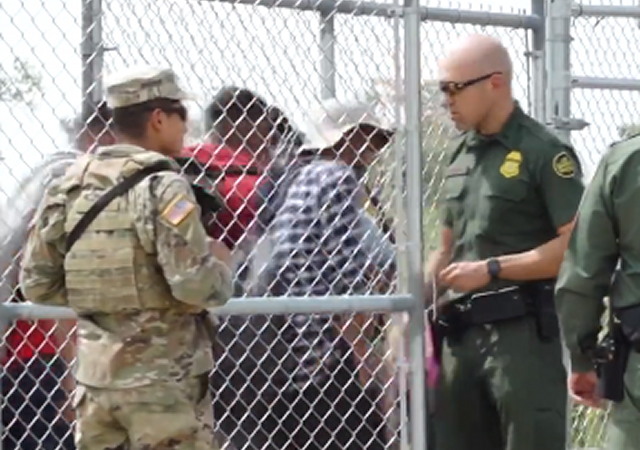 The southern border in the state of Texas has been under assault for months. Governor Greg Abbott has mobilized the Texas National Guard to help with the problem, but in a stunning turn of events, the Border Patrol bypassed them.

A fence was erected around a piece of private property repeatedly used by illegal border crossers. The Texas National Guard locked the gate to the property, but then the Border Patrol showed up and opened it.

Border Patrol agents on Wednesday opened a gate that had previously been locked by members of the Texas National Guard, in order to allow a number of illegal immigrants deeper into the United States.

Fox News witnessed members of the guard close and lock the gate, which is situated on private property and had previously been open, to deny entry to migrants who had crossed illegally and were expecting to be allowed into the U.S.

The illegal immigrants were then seen standing outside the gate waiting to be allowed in, with the Texas National Guard watching on.

A short time later, Border Patrol agents appeared with a key and opened the door, allowing the migrants to get through and be processed into the U.S. immigration system.

The incident demonstrates the stark contrast in approach between Texas authorities and Customs and Border Protection (CBP).

Under Gov. Greg Abbott, Texas has surged law enforcement to the border under Operation Lone Star. That included a focus on stopping migrants from entering the U.S. with Texas now returning recently-entered illegal immigrants to the border, and its own border wall construction under way.

Border Patrol agents, meanwhile, have been increasingly made to focus on processing migrants into the interior, with migrants frequently not seeking to escape Border Patrol — instead seeking them out so they can be processed and quickly released into the U.S.

Watch both of the videos below:

NEW: For the first time, we witnessed the TX National Guard close & lock a gate on private property at a major crossing area in Eagle Pass, denying entry to migrants who just crossed illegally & expected to be let in. Border Patrol then came w/ a key & let them in for processing. pic.twitter.com/S1fZaTJnEi

This was the moment Border Patrol arrived with the key and let the migrants in. The landowner allows both TX DPS/National Guard and Border Patrol to work here. The gate has always been left open in the past. TX is now closing it, & migrants have to wait for BP to be let in. pic.twitter.com/AR4S9Vn3qH

While Texas secures the border, the federal government is enabling illegal immigration.

The federal government must do its job & fix it. https://t.co/4yqR8uQMo8

Why are we even bothering? Why do we have a Border Patrol or a border policy if this happens?

Send the local chapter of the Welcome Wagon to the border.

Gov. Abbot should copy Gov. Ducey of AZ. Get decommissioned boxcars and stack them along the border welded together. The CBP will have to get some heavy equipment and welders to undo that. It will take a while. Let ’em sweat. Then after they do that, reconnect the cars, so CBP will have to that again See who gives up first.

The welds don’t have to meet any particular standard. They could bring out classes of welding students to practice their craft while contributing to society.

The National Guard should have siezed the border patrol agents, destroyed the key and handed them over to the local sheriff for prosecution.

Does this violate any TEXAS law besides trespassing?

Indeed. How can they go on private property without permission?

Actually, here’s the thing I don’t see in these articles:
Did the private property owner want the gate locked or unlocked? Seems that’s mostly his call.

Well, he seems to have given them a key. That means they’re entitled to be there and to open the gate until and unless he tells them otherwise and demands his key back.

“Give us the key or else” has no compulsion.

To whom are you referring, the illegal immigrants or the BP agents?

It appears the BP was trespassing on private property. Question is how did they get a key to the lock? DId the landowner give it to them (under duress or not), or was the fence and lock USBP property erected on private property, legally or not?

OK, reading further, the landowner cooperates with both TX and USBP. That is how they have the key, so the TXARNG locking the gate is just to slow them down, they know the owner allows the USBP to open it and let the illegal aliens onto his property.

They were not “trespassing” ( in the statute sense)

There are any number of things which may not be public knowledge.

“Open Fields” doctrines, Border security ( applies to border land only) under imminent domain, some form of “right of way” for fence monitoring (common for private land along interstates) not to mention this is a crime so they have probable cause

In short, they are not “trespassing” regardless of how the media may try to spin it.

Obviously not trespass in any way if the landowner gives permission. The US has a strip (apparently on the other side of the fence) which is US property, very narrow in places, where the USBP has jurisdiction. Without further information, this is private property which the landowner allows USBP to move illegal aliens through from the border strip. Stupid, but they have their orders, as the TXARNG has theirs. The situation won’t change until Quid Pro Joe and friends are gone, if then.

I agree BP agents might have probably cause if a crime is being committed. But that presumes the entry onto the private land is to enforce the law/prevent the crime. That is not what happened here, unless the illegals were taken into custody to be returned to their countries of origin. But we all know that’s not what is happening. BP is facilitating their illegal intrusion into our country. They are entering private property as part of a conspiracy to enable the commission of federal crimes.

If they’d done that they’d all be under arrest and going to federal prison for a very long time. What crime would the Border Patrol agents have been committing?

There has been other saber rattling by State governors about refusing to cooperate with federal agencies based on the 10th Amendment. As a maple-sucking ferriner I admit that exceeds my grasp of the intricacies of federalism., although the fact that the US federal government has vastly exceeded its Constitutional remit to a farcical extent is a given.

Would Texas have such a recourse?

Refusing to cooperate is a very different matter. States have the 10th amendment right to refuse to lift a finger to help the USA enforce its laws. They have the right to forbid their employees, and employees of their subdivision (counties, cities, etc.) from helping the USA enforce its laws. But they have no right to interfere with the USA enforcing its own laws. For the TXNG to attempt to arrest Border Patrol agents would be thoroughly illegal and, if done on the governor’s orders, insurrectionist.

Governor Abbott took it a step further than saber rattling..

“NOW, THEREFORE, I, Greg Abbott, Governor of Texas, by virtue of the power and authority vested in me by the Constitution and laws of the State of Texas, do hereby authorize and empower the Texas National Guard and the Texas Department of Public Safety to respond to this illegal immigration by apprehending immigrants who cross the border between ports of entry or commit other violations of federal law, and to return those illegal immigrants to the border at a port of entry.”

Aiding in the commission of a crime (Illegal Entry), so a slew of human trafficking offenses are committed when they actively admit people at locations other than ports of entry.

Illegal entry is a federal crime, which can only be enforced by the Border Patrol. The TXNG has not been authorized by the federal government to enforce that law, so it has no right to do so. And it certainly can’t do so by arresting the very Border Patrol agents who have the sole authority over the matter! If the guardsmen tried to do that they’d be the criminals, and they’d go to prison.

Then it’s treason and dereliction of duty.

If the illegals aren’t deported, but are released into communities (with a promise to come to court at a later date, wink, wink), the agents are part of a conspiracy (with their superiors and the illegals) to commit federal crimes in violation of our border security and immigration laws.

Now THIS is a deliberate provocation and power play

I was under the impression that the Border Patrol were the good guys, or are we at the “I vas chust follovink orders” stage?

They’re the good guys to the extent that they try to do their job as best as they can. But ultimately they are required to follow their orders. They can’t just make up their own orders and act as they please! Would you want them to be able to do that?!

No, but refusing to follow clearly insane orders and then either accepting judgement and/or quitting would be the honourable thing to do.

If NY State passed a law that said the 4th Amendment didn’t apply to, say, black people and cops could search, arrest and detain them at will without cause or consequence, that would be pretty clearly unconstitutional and I would expect every officer to refuse to obey any order to do so from a superior.

You might expect that, but I expect that you would be sorely disappointed. Not because said officers are necessarily chomping at the bit to harass blacks, but because their salaries and pensions are more important to them than the rights of civilians.

Dan’s point is taken. As is yours. Dan’s point is largely theoretical, but is sometimes seen in actual operation when unlawful orders run into people with integrity. Those who would enforce unlawful orders to safeguard their livelihoods have sold out their integrity. They are actually the people who should be relieved of their duties, but in fact they are the people retained by the state.

Clip was on 20 Tweets from Bad Blue last night, our government wants us to be invaded

The last time the FEDs unlocked and opened the doors for illegal entry the participants were arrested and face long sentences. The two tiered injustice system continues.

Any comments from Bowser and Adams yet? I am looking forward to hearing their take on Biden opening the border to illegal immigrants who Abbott then sends to NYC and DC.

This is the visual example that encapsulates the problem; the federal govt’s abdication of their responsibility to secure the border while simultaneously precluding State govt actions to do so. Which results in millions of illegal immigrants some of whom are now present in the Blue enclaves of DC and NYC. Their actual presence now demands a price be paid by those cites to demonstrate their self proclaimed virtue instead of signaling virtue cost free.

Why the Federal Government should be relocated from Washington, D.C.

Why without Federalism we will be ruled by the Pelosis, Schumers, Bidens, of the Nation forever more.

It is clear by this that the Border Patrol is corrupt. The BP Supervisor did this and his crew did nothing to stop it. This reeks to the highest.