Moderna exploring the possibility of creating an mRNA monkeypox vaccine. 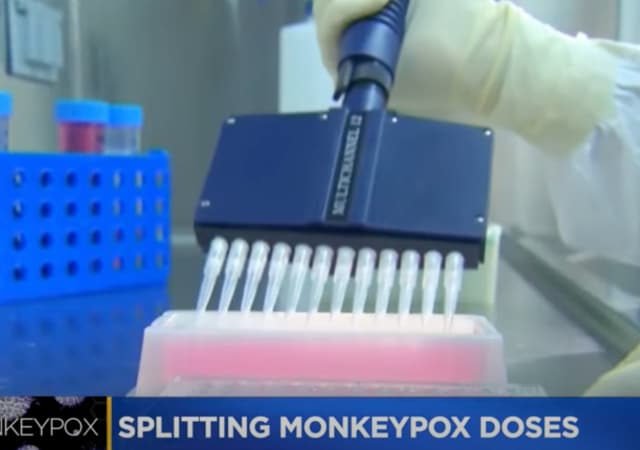 I recently noted that the federal government is trying to find a way to stretch the limited supply of the monkeypox vaccine by changing how the doses are administered to people.

The Biden administration is now permitting the use of the alternative dosing method, which will use one-fifth as much per shot.

In order for the Food and Drug Administration to authorize so-called intradermal injection, which would involve injecting one-fifth of the current dose into the skin instead of a full dose into underlying fat, the Department of Health and Human Services will need to issue a new emergency declaration allowing regulators to invoke the F.D.A.’s emergency use powers. That declaration is expected as early as Tuesday afternoon.

The move would help alleviate a shortage of vaccine that has turned into a growing political and public health problem for the administration.

The administration has faced a barrage of criticism that it was too slow to ship vaccine that was ready for use to the United States from Denmark, where it was manufactured, and too slow to order that bulk vaccine stocks be processed into vials after the disease first surfaced here in mid-May.

In less than three months, more than 8,900 monkeypox cases have been reported. The disease spreads primarily through skin-to-skin contact during sex among gay and bisexual men. Federal officials are concerned about both the current infection rate and the risk that the disease could spread to other parts of the population.

Additionally, Moderna has announced it initiated a research program to consider whether the company could create a monkeypox vaccine with mRNA technology.

He went on, “We did initiate a research program. We are tracking that very closely and obviously, given the recent public health announcements and increasing concern about availability of vaccine supply, we are beginning to look at what it would take for us to use our platform and to provide a monkeypox vaccine — both [to] intervene in the current and the current epidemic but also to try and address long-term issues of supply in this public health threat.”

Domestically and globally, officials have been vocal in their concern that there are not enough monkeypox vaccines to address the emerging crisis. With demand increasing, officials from the U.S. Health and Human Services (HHS) have reported that a total of 1.1 million doses of the JYNNEOS vaccine for monkeypox, a two-dose regimen, will be allocated to states and jurisdictions across the country. Approximately 1.5 million Americans are currently considered eligible for vaccination, the Centers for Disease Control and Prevention (CDC) told ABC News last month.

mRNA technology didn’t work for the Wu flu, so Moderna needs to explain why it thinks this will work for monkey pox. BTW there is a perfectly good existing vaccine. Why not spend the money on producing more of the same instead of on some pipe dream?

IMO, this is about leveraging the mRNA and bringing it mainstream for far broader application and of course the subsequent ongoing revenue streams to companies who have the lead in offering these applications.

The transmissibility and mutation rates of monkeypox are not even in the same stratosphere as COVID.

We have zero need for an mRNA vaccine for any of these tested and established DNA virus vaccines unless they can prove that it improves the lifespan of immunological memory cells (particularly T cells). Such a study would take a pretty long time to do.

That said, I don’t think Moderna is “evil” per se…they have every right to explore the tech for any improvements in benefits of such a vaccine (with the normal pre-COVID precautions taken for vaccine trials).

No the reach isn’t there compared to Rona but it provides another venue to showcase the application of the mRNA process in seeking to establish it as an effective and safe technique. All of which potentially feeds their pocketbook as they use the technique to deliver more products which the govt then purchases or worse mandates as the preferred deliver method.

These people have no clue and you trust them with your healthcare.

This is complete Clown World. A perfect comedy of errors, and we’re still building up to the punch line.

I half expected the “new” vaccine administration method was going to be to paint the stuff on the inside of paper masks and force you to wear them for nine months.

They want the vaccinated to generate the antibodies internally and for them to then “inject”(insert mental image here) the rest.

Or they conceive it as an OS (operating system) and the companies pushing mRNA then provide periodic updates just like a subscription revenue model….

A pox on all their monkeys.

Stupid. What this will do is help create vaccine-resistant strains.

Spread how? It isn’t airborne and incidental contact isn’t enough to transmit.

How about just keeping your pants on and zipped?