“While not legally binding on the Pentagon, it appears to send a signal of congressional opposition to efforts to counter extremist narratives in the military.” 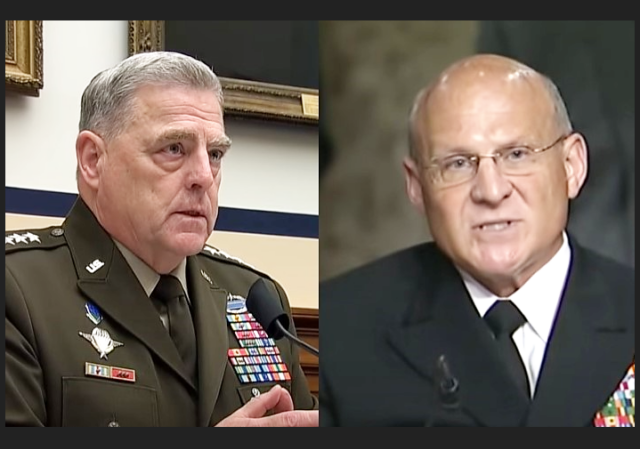 The military is having recruitment and retention issues unlike any in decades, almost all are self-inflicted, and the radical Joe “I am the Democratic Party” Biden administration seems determined to fulfill Obama’s goal of reducing our military to pre-World War II levels.

At LI, we’ve covered much of the Biden military’s woke war on wrongthink; here are just a few:

Amid the chaos and destruction created by turning our military into a regimented version of WokeU, Republicans on the Senate Armed Services Committee have had enough and are directly addressing a core problem that is severely damaging our nation’s military.

The Senate Armed Services Committee has called on the Defense Department to halt its programs to prevent and root out extremism in the ranks.

The report accompanying the Senate’s National Defense Authorization Act, which was made public late Monday, states the committee’s view that “spending additional time and resources to combat exceptionally rare instances of extremism in the military is an inappropriate use of taxpayer funds, and should be discontinued by the Department of Defense immediately.”

The language has not previously been reported in the press. While not legally binding on the Pentagon, it appears to send a signal of congressional opposition to efforts to counter extremist narratives in the military . . . .

The Committee’s approval hinged on the vote of Independent Maine Sen. Angus King.

While the Senate report language suggests the committee as a whole supports halting counter-extremism training and analysis, the same document reveals that the committee approved including that section of the report by only the narrowest of margins: 14-12.

Every Republican on the committee voted for the motion, and every Democrat voted against it. Maine Independent Sen. Angus King’s vote in favor of the language tipped the balance in the GOP’s favor.

This is where I would normally urge you to read the rest, but don’t bother. I’ll sum it up for you: military bad, military a cesspit of extremism, and even if it’s not, even one trained active duty military member or veteran poses an existential threat to the entire U.S. government.

It’s long been the radical left’s strategy to tear down and destroy American institutions and to build up and replace them with their own hyper-partisan and -ideological versions of the same thing. How long before we start hearing about Obama’s “civilian national security force” that is “just as powerful, just as strong, just as well funded” as the U.S. military? Only, you know, woke and answering only the radical left and its two-tier “justice” system.

CNN headline will be: “Republicans favor extremism in the military”.

Need to find out how many repubs voted for pedo joe’s comrades to hold office. They do seem to like to be in the minority so they can whine about the dems without offering much of anything to change the country’s path.
But there are repub women showing the cuck’s in the party how to fight. Bless you girls.

Do you really need to know? They’re the usual GOP suspects.

Retire all current colonels and generals and promote replacements on merit alone. The body rots from the head down and the current top brass can’t win wars, can’t recruit, can’t motivate the troops and breeds poor morale. Total failure. And this goes back before the wokeness. We haven’t won a single war since WWII.

The problem is Obama purged a good part of the captain to major rank officers, ones who might have rebelled against martial law. No ranks of the military can be blindly trusted anymore. It will be on a ‘trust by verify’ basis for many years to come.

Btw, that beast Mooochelle is coming out with another book someone else wrote for him/her/it.

How Obama Shrank the Military:
https://www.wsj.com/articles/how-obama-shrank-the-military-1438551147

Odumbo, about Michael – er, Michelle – in his own words:

“We haven’t won a single war since WWII.”

That isn’t necessarily a commentary on the ability of the US military as much as it is a comment about the civilian (particularly Congressional) oversight which has morphed to a politician/lawyer’s version of operational control.

That’s why I recommended decapitation. We never go into wars to win. We just waste money for a few years then get our butts kicked when we inevitably leave. Now our top brass works for China and Ukraine and who knows who else.

But .. but .. but ..; if they do not root out extremist narratives like loyalty to the Constitution, how can the regime be sure that the military will act decisively to root out thoughtcrime from the civilian population when so ordered?

[there is a touch of sarc there, but given the situation, the risk is real.]

There is real extremism in the military, it’s just coming from the left.

Having served for 24 years in the US Military, I think that this is purposeful, the destroying of the military. You might call me a conspiracy theorist, but this is what I see. Destroy the military in the next 2 years, then, when the Demonrats steal the 2024 election, you won’t have a military to quell the riots, as you’re never sure how the military will act, if they will fire on American citizens or not. Solution? Call in the UN and their troops. Columbians, Sri Lankans, or any other UN troops will not hesitate to fire on American citizens. All I know is that those nice blue helmets make good targets.

Holy shit, I’ll put my money on the good ol’ boys in the matchup of good ol’ boys versus blue hats. That’ll be a fucking rout for the ages.

yea, the blue helmets are good at raping children and that’s about it.

That and taking bribes. The Western Nations force contributions are not prone to abusing their authority. The developing world contingents are as bad as you can imagine; poorly trained, little discipline and a product of their culture/society where bribes and ‘strong man with a gun’ makes the rules.

The Chinese communists are engaged in their perennially brazen military machinations, espionage and assorted malignant belligerence; Iran and its Islamic terrorist proxies are feeling emboldened under dotard-marionette Biden’s residency in the White House geriatric ward; but, SecDef Austin and his lackey, Milley, are still wasting their energy combating the phantom contrivance of “white rage.”

They own Biden and Pelosi and McConnell, and probably McCarthy too:

China Just Turbo-Charged Its Tech Sector. Is The Biden Admin To Blame?
https://dailycaller.com/2022/07/21/china-turbo-charged-tech-sector-biden-blame/

President Trump’s or President DeSantis’s first order of duty after winning the White House in 2024 should be to fire Milley and every other General, Admiral, commander, etc. who has actively worked to propagate and legitimize the subversive, cancerous and anti-American “Critical Race Theory” ideology throughout the U.S. Armed Forces. Then, fire Christopher Wray and Gina Haspel and clean house at the FBI and CIA.

Fire the heads of the military academies as well.

My God, even that sub-thirty second clip of narcissist-incompetent, Obama, peddling his usual snake oil, is so incredibly nauseating to watch. What an odious and utterly transparent hustler this guy is, and, how appallingly destructive was his incompetent tenure.

We all knew it the minute he stepped on the stage. Same with Kamala Harris, Fauci, Hillary Clinton, Jill Biden etc.

Some people just radiate their stink.

Actually, he’s not incompetent. The problem is what he’s doing with that competence: The weakening and eventual destruction of the nation.
.

This is fantastic news, although a baby step it is a step away from the “MUH MILITARY BUDGET!!!!!!!!!!!!!” approach of giving zero oversite to the military and considering raising its budget and considering admirals and generals gods sacrosanct to actually governing.

It shouldn’t have had to come to the point of the pentagon purging Republicans for refusing to agree men are women and adopting CRT to force baby steps away from military worship but hopefully the trend towards (among other things protecting soldiers in the military having a right to be a Christian Jew or Muslim) actual governing will continue.

I agree that this is excellent news particularly since it happened under the radar. These GOP sens are not dancing for or tossing red meat at the base, they are doing what they think is right.

Ms Fuzzy,
What happens when the military starts training their guns on us? Will you tell them to “knock it off”?
No.
I rely on myself!

It is a good insight that they did this under the radar because you are right they are just doing the right thing.

What makes me think “extremists ‘ means ” not woke”?

My opinion is they are out to destroy the military, they have been working on it the last 50 years and finally took over the administration and installed their people into the military highest positions.

Because they are very open about that.

My son was a Regular Army soldier for four years, then a National Guard NCO for thirteen years, for a total of seventeen years military service. He served two tours in the sand box and one in the rock pile. When he returned from his second Iraq tour he said he saw evidence of wokeism in his NG unit but he said it was so obvious after he returned from his Afghanistan tour that he left the Guard in disgust – three years short of earning an eventual pension. Nothing I or anyone else could say would convince him to stay in another three years. His senior NCOs and his commanders, including someone from the state NG bureau could sway him. He said he had little confidence that he would have battle buddies he could completely trust.

Thank you, Obama and Biden. The way we’re going, we’re ripening for a takeover.
.

A close win in a Senate committee means nothing without majorities in both houses of Congress to pass legislation, and a president to sign it. This administration and their lackeys in the Pentagon will continue their destruction of the armed forces. With two and a half years to go, they can probably finish the job before anything can be done to stop them.

We need to stop pretending the problem is American military readiness it really isn’t.

The military could probably defend us if they succeeded at purging every Republican from its ranks.

You could say it, our views, values, and our position in society against being purged is worth fighting for. I don’t want Christians to be purged from the military for being Christians I don’t want to have to believe in abortion to serve.

The biggest fear of the woke military is more Republican senators will turn on them and see them for what they are and that their budget will no longer be assured by cultish devotion from Republican politicians.