Many protesters are immigrants, making decent money for their families back home. 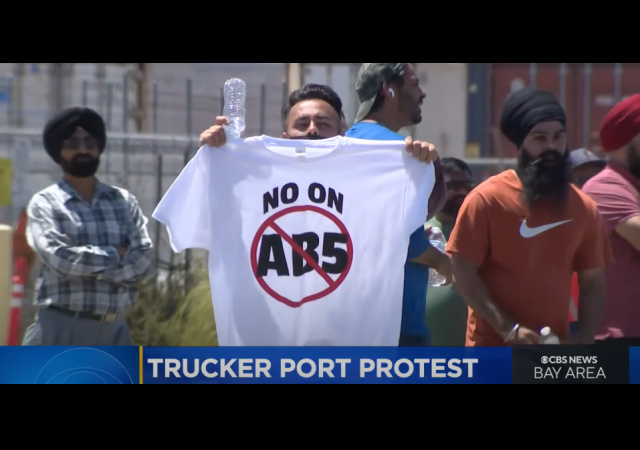 Independent truckers have shut down the Port of Oakland for the third straight day, protesting against a new labor law that would make them employees.

Assembly Bill 5, passed in 2019, strains the “gig” economy with tougher standards to classify workers as independent contractors. From KTVU:

A federal appeals court ruled last year that law applies to some 70,000 truck drivers who can be classified as employees of companies that hire them instead of independent contractors.

The International Brotherhood of Teamsters called it a “massive victory” for exploited truckers. But the California Trucking Association, which sued over the law, had argued the law could make it harder for independent drivers who own their own trucks and operate on their own hours to make a living by forcing them to be classified as employees.

The legal battle stalled enforcement of the law but last month the U.S. Supreme Court recently decided it wouldn’t review the decision.

Truckers are now asking Gov. Gavin Newsom to meet and discuss the issue.

Meanwhile, there’s been no word on when the state might begin enforcing the law, which is still being contested in lower courts.

Oh, look. A union approves of the law. I guess the union cannot stand the fact that these truckers want to remain independent and take care of themselves:

But many truck drivers say the independent contractors’ model gives them flexibility and the ability to grow small trucking businesses in an industry that has become an economic engine for Sikh immigrants and their children.

Whoa, people want and like their freedom in their work:

Many drivers say the new law will force them to seek work as an employee-driver or they will have to pay more for insurance and permits to remain independent under the law’s guidelines.

Said Ahmedi, a 47-year-old trucker and protester from Elk Grove, Calif., said he likes the freedom of being self-employed, but it would be too complicated to continue as an owner-operator under the new law.

Mr. Ahmedi said he earned almost $70,000 last year as an independent driver and was still able to take two, monthlong trips to visit family and in-laws in Afghanistan and Azerbaijan.

“If I am a working driver I am stuck with the company,” he said.

Port of Oakland supplies almost all of the imports and exports in Northern California, especially agriculture from Central Valley to Asia.

The State gets more in permit fees, insurance companies get more, and the labor racketeers get tens of thousands of new slaves.

Glad to see the Dems taking the strain off the already stretched supply chain.

Meh. By September, there’ll be no diesel fuel or DEF, and these guys’ trucks are going to be doorstops anyway.

Until they start ignoring the regs, and continuing to drive, refusing to deliver to any state that enforces them.

Is it just me, or do all the independent truckers appear to be people of color?

Is the union being racist????

Quite the opposite. The union wants to be “inclusive “.

And, I don’t think Indians use the “people of color” crutch.

It’s almost like they know that the union is bullshit.

Shouldn’t they have been lobbying the CA legislature a couple of years ago when this was passed and signed?

Yeah, I’m sure these independent truckers have the millions of dollars required to wine and dine and lobby (bribe) legislators.

No amount of lobbying will sway a “progressive” legislature that already has its mind made up as to “what’s best for you.”

My point being they could have shut down the Port of Oakland back then, several times.

With the covid lockdowns, nobody would have noticed.

You would be surprised, or not, at the amount of money that the largest trucking companies throw at Congress

Leftists doing what they do best: liberally denying people of their liberties.

The zoom, laptop, credentialed class is totes fine when they are classified as independent contractors or consultants insulated from the consequences of AB 5. The blue collar folks like drivers…not so much.

Obviously these blue collar folks don’t full comprehend all the advantages their better in the legislature and in consultation with unions have created for them. /S

Incorrect. I’m a lawyer who contracts legal professionals on certain cases. I just completed an audit by the unemployment department and the reclassified every independent contractor I’ve used for the last 3 years as an employee and then charged me the taxes plus penalties!

As a 30+ year truck driver I’ve written on this extensively in other places. California is cutting it’s own throat and causing massive supply chain issues by this law along with emissions standards pushed by Unions at other Ports such as Long Beach which forced older trucks out and gave the Unions and the largest companies like JB Hunt and Swift who can afford to turn over their fleets every 3 years a stangle hold on the traffic in and out.

Articles never mention the other ways this law screws truck drivers. If they are employees they cannot deduct depreciation, interest, insurance, lodging, meals, and fuel as business expenses. If there is no tax benefit to ownership anymore they will likely be forced to sell their trucks at large discounts: their new employer may require them to only drive fleet vehicles, or will use this opportunity to gouge them on purchasing their old truck. Worse, they may do neither: you will work for us and pay those non-deductible expenses out of your wages, which we may or may not reimburse at a reasonable rate.

This law begs the question: Why does the State even give fig about Independent truck drivers in the first place? Answer being: because of the Unions, one of the most powerful ($$) in the entire country.
If I own a Mom & Pop grocery store can Walmart try to shut me down?
Can’t a judge cut through the BS and see the OBVIOUS motive behind laws like these that are merely designed to remove competition and throw out the law altogether?