“The city has become the first major European city to switch off hot water in public buildings, with no warm water in washrooms and no hot showers at swimming pools and sports halls.” 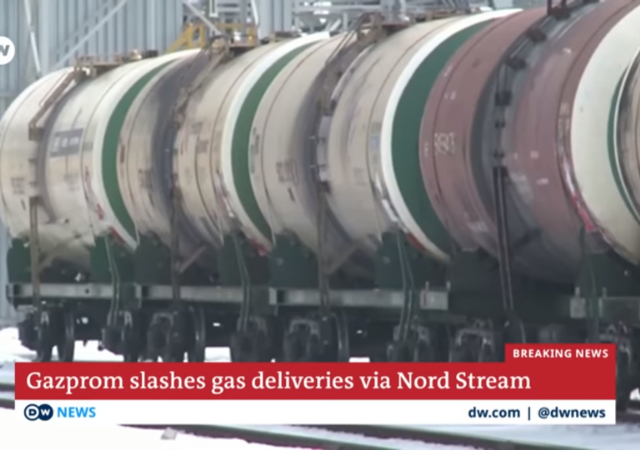 The Germany city of Hanover has turned off hot water supply to public buildings after Russia this week slashed gas exports. The measures taken by the city include “cutting off of hot water supply to sports centers and gyms, outdoor pools and wash basins,” the German state broadcaster ZDF reported.

Public buildings, sports facilities and schools in Hanover will also be much colder as autumn approaches. The city has ordered “the room temperature (in public buildings) to be no more than 20°C (68°F),” and in “sport centers and gyms to 15°C (59°F),” the ZDF added.

The move will hit children the hardest. “Particularly children in kindergartens, students in schools and city employees will suffer the inconvenience due to reduced heating time, cold water and a maximum temperature of 20°C,” the broadcaster added.

The move comes as Russia, Europe’s biggest energy supplier, has drastically reduced the supply of gas through its pipelines. “Russia’s Gazprom on Wednesday halved the amount of natural gas flowing through a major pipeline from Russia to Europe to 20% of capacity,” the Associated Press reported Wednesday.

Officials in the central German city of Hanover have announced plans to cut energy consumption by 15% ahead of the expected gas shortage this winter.

The city has become the first major European city to switch off hot water in public buildings, with no warm water in washrooms and no hot showers at swimming pools and sports halls.

Hanover joins other German communities in seeking to limit consumption as the threat of a full or partial shutoff of gas from Russia looms over sanctions and the war in Ukraine.

The city will limit the period in which public buildings are heated between October and March, with the maximum temperature generally set at 20 degrees Celsius (68 degrees Fahrenheit).

In storage areas and on public transport, that maximum will be between 10 and 15 degrees. Heating, more generally, will be switched off or lowered in areas where it is not strictly necessary.

Sports halls and gyms would also be asked to limit heating to 15 degrees, with no more warm water when showering.

There will be no more outdoor lighting of public buildings, museums and sights, with wider efforts to limit permanent lighting inside buildings. Public fountains will also be shut down.

According to the German newspaper Bild, similar rationing measures have been rolled out by other German cities, such as Munich, Nuremberg and Leipzig.

This winter, German cities will not only be colder, they will also be darker. To cope with the energy shortfall, the city of Berlin has decided not to illuminate almost 200 of its landmark buildings and monuments. “The Berlin Cathedral, St. Mary’s Church, the Old Palace – all in the dark! From today onwards, these and other stately buildings and monuments of Berlin will not be illuminated,” the Bild reported Wednesday.

What is playing out in some German cities today could be the fate of entire Europe this winter. On Tuesday, 27 European countries endorsed a plan to enforce the rationing of gas across the European Union. EU member states “backed a voluntary 15% reduction in gas usage over the winter, a target that could become mandatory if the Kremlin ordered a complete shutdown of gas to Europe,” the British newspaper Guardian noted.

As Germany descends into cold and darkness, it is worth noting how arrogantly the German political class reacted to President Donald Trump’s warning over their growing energy dependence on Russian.

At the UN general assembly in September 2018, when President Trump warned Germany against becoming ‘totally dependent’ on the Russian gas supply, the German delegation, including the country’s foreign minister, publicly ridiculed him. “German Foreign Minister Heiko Maas could be seen smirking alongside his colleagues,” The Washington Post reported.

The indoctrination of young people and the corruption of their parents rides again.

Yeah, but a large percentage of those USSR deaths were inflicted by the communists, not by the Germans. There’s no way to know how large.

Do you understand why energy is a matter of national security now?

And since the Germans cannot buy enough Russian Natural Gas, they are forced to burn Russian Coal.

Sorry for the downvote. Replace with 5 upvotes. The danger of the phone.

When Trump warned them they were overly dependent on Russia they publicly laughed at him.

Yes, at the UN
The pictures are priceless

Now they can show their smirks right up their Arsch‘es

The germans are pompous fools. I’m going to enjoy hearing about the cold and dark coming out of the middle of the yur uh peeun continent.

And Obama and The Cool Kids mocked Mitt Romney when he cited Russia as our most important geopolitical rival.

Germany is turning into North Korea. I wonder if they had this problem in the Dark Ages?

Who ‘down-voted’ Phil’s comments? Whoever did forgot Hitler and the Holocaust.

Though the frost was cruel- a poor man came in sight gathering winter fuel.

Please, forgive my ignorance: what is GKW? Thank you.

Danke. I mean, thank you.

Trump ridiculed them? How cute. I remember that.
And…
They don’t care.
Tyrants simply do not care.

Like this “assault weapon” BS from the House. Oh they can’t do that, it violates Bruen!
Oh, OK.
Meanwhile, they just did that.
Not sure why it takes worst-case scenarios to finally understand how evil these people are, but that’s history for you.

They didn’t “just do” anything. They passed a bill in the House, knowing that it can’t ever become law. It won’t pass the senate, and if it somehow did, and got signed, the courts would immediately strike it down.

So sure, the House can technically pass whatever bills it likes. Nothing stops it from passing a bill to close the Epoch Times, or to execute Donald Trump. But nobody can actually make such a law.

They are trying to see if they can get McConnell to make the same mistake twice within a month. Someone also posited that Turtle’s last move on guns dampened Republican voters’ enthusiasm for November which my result in lower turnout.

I think they just want to be able to tell their Squad voters that they fought right to the end. The Republican congressmen who voted for this should be shot (as would be appropriate).

I remember sometimes the rule on that temperature being SO enforced that some buildings had their AC fired up to bring them DOWN to those temperatures.

During the winter, I set the thermostat at 66 during the day, and 56 at night, and dress accordingly. In summer it is 77 in the day, and 79 at night. Not because I have to. I just don’t like giving my hard earned money to the power companies. Your body can acclimate itself to these temperatures so that you will feel comfortable.

With me it’s not the power company. It just makes sense.

I pay 9.63 cents/kWh, and set the thermostat where I please. LOL

Your metabolism works at a much higher level when you’re young. I remember walking to grade school in -20 temperatures in a light jacket. Now I don’t leave the house in +40 temps without long johns, a heavy flannel shirt and a heavy winter coat.

Come on, Germany! You almost conquered most of the world. Twice. (But… didn’t).

Let’s see the master race work their way out of this one. Hint: blaming Jews isn’t the answer.

I also sincerely hope that Uncle Sam doesn’t ride to Europe’s rescue yet again. They need to grow up.

How about his: Let the ChiComms shoot down Pelosi’s plane. It’s a start.

What has shooting down Pelosi’s plane got to do with this?

Aside from my question, had you consider the lives of the crew, or are you really that selfish?

Wish she’d invited Romney and a few other rinos to go along.

We have been finding the Ukraine war in its entirety
The Europeans have given nothing but lip service
Let them suffer in the heat and then freeze
Maybe they wake up?

If the master race hadn’t killed all those Jews in WW2 maybe one of them would’ve invented an alternate way of heating water.

Maybe one of them muslims the Germans are importing will invent something.

The problem: the device uses all the fuel in an instant.

my favorite insult these days.

Trump warned the Germans about dependence on Russian energy.

The idiots laughed at him.

He who laughs last, laughs BEST!

In northern Europe it is common for homes to draw their hot water from the centralized water utility. They use this water not only for showers, cleaning and cooking but also to heat their homes. Drawing down the hot water supply is a HUGE deal and portends the beginning of a very, very harsh winter for them. If only they had listened to Trump, instead of smirking and laughing like a bunch of hubristic prog morons. Oh wait, they ARE hubristic prog morons. Fuck them.

wonder if those who paid for gym memberships will get a rebate from this.

Wait… how will they do the mandatory hand washing in hot water to ward off the Rona or something worse? Is Rona done then because the Germans are no longer playing?

Meantime, Hawaii ends coal imports and is shutting down a major source of power.

20°C is actually quite comfortable and warm. When I was growing up in Europe, that’s the temperature we kept in our apartment.

Sports halls and gyms would also be asked to limit heating to 15 degrees, with no more warm water when showering

It almost doesn’t matter there’s no warm water, nobody is going to shower at 15C anyway.

The now-unheated outdoor plumbing is really likely to crack when the winter freeze hits, not that anybody is likely to be drinking from an unheated fountain during a German winter.

Next step — Force the utilities to put shut off switches on individual meters that can be remotely activated. You get 10 kWh per week and then you are off till the next week.

Say, who’s up for some liebenspraum? Ja?