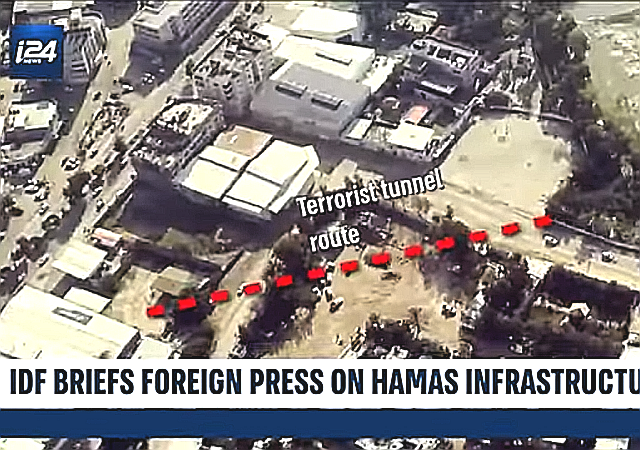 The newly disclosed information exposes Hamas’s ramping up terrorist infrastructure since the last Gaza conflict in May 2021. Last year, Hamas and other terrorist groups fired more than 4,000 rockets at Israel, often using civilian areas in Gaza as launch pads and weapons depots.

“The IDF said on Wednesday that Hamas has rebuilt some of the capabilities that were damaged during last year’s Gaza war, including three new tunnels and a series of weapons manufacturing and storage sites,” the Israeli news website Ynet News noted on Wednesday.

The new terrorist facilities are built to cause maximum civilian casualties in case of an Israeli response to Hamas rocket fire. “In a briefing to members of the foreign press, the military presented aerial imagery and maps showing what it said are tunnels, weapons production sites and arms depots positioned near schools, hospitals, the al-Azhar University, a Pepsi factory, mosques and United Nations facilities,” the news outlet added.

#Breaking @IDF just released several intel. based videos including of a weapons production site near Al-Shifa hospital in #Gaza. In my years of service I was never successful in revealing this kind of intelligence from Gaza to the world *before* conflict. This is very serious. pic.twitter.com/Sdj9ExotqD

Israel’s military (IDF) released new footage on Wednesday showing examples of Hamas infrastructure embedded in civilian populations in the Gaza Strip, including an underground tunnel located near a Pepsi factory and a UNWRA school.

Other infrastructure included an entrance to a terror tunnel network near the Islamic University of Gaza and a weapons storage facility located near a mosque and a UNWRA medical clinic. (…)

“The whole world must see this crime against humanity. Israel will operate with precision and force against terror targets and defend the citizens of the State of Israel.”

The IDF footage shows that Hamas has built a weapons factory near Gaza’s biggest hospital. “Several other Hamas weapon manufacturing and storage sites and tunnels situated near schools, universities, mosques, and other civilian sites were also presented to the reporters, including an arms factory close to Gaza City’s Shifa Hospital,” The Times of Israel reported.

Shifa Hospital, Gaza’s largest and most-frequented medical facility, often serves as a Hamas command center — with a bunker beneath its compound. In a June 2017 post, Professor William A. Jacobson noted “Hamas’ use of Al-Shifa as a de facto headquarters for Hamas leaders, who can be seen in the hallways and offices.”

During the Gaza conflict of 2014, The Legal Insurrection documented the extensive use of civilian facilities for Palestinian terrorist operations, including the Shifa hospital.

The Legal Insurrection also reported how Palestinian terrorist groups manipulated the media coverage and intimidated foreign reporters in order cover up the widespread use of human shields tactic during the conflict.

The Jerusalem Post explained on Wednesday: “Shifa is considered the blockaded enclave’s main hospital and treats thousands of patients daily. But it has also been used by the terror group for years, including in the 2009 Operation Cast Lead, when senior Hamas officials hid in the building. It also used the hospital in 2014 during Operation Protective Edge as its main headquarters.”

The evidence released by the IDF further highlights Hamas’s use of Gaza civilians as human shields. While the Israeli military takes every precaution to avoid civilian casualties among Palestinian, Hamas deliberately puts them in harm’s way. Hamas and other terrorist groups use civilian deaths to smear the IDF — often helped in this endeavor by the mainstream media outlets that willingly paddle their false narrative.

We (i.e., the Western Word) better start bulking up.

We are bulking up with blind leaders of the blind.

Why is non stop news of Israel here combined with American news? Being connected to Israel is the reason why the USA is attacked. We shouldn’t be caring about what Israel does as they are sending spies to spy on Americans and they steal US military secrets.,case in point Jonathon Pollard who trump pardoned. Enough with the Israeli news. America first.

To answer your question it is because the curators of this website care about both countries. Nothing wrong about that. As for this notion that America is being attacked because of our relationship with Israel, that is silly and false. America haters will always have excuses to hate us. As for spying, not condoning it but all countries spy on eachother including allies. To single out Israel as though they have some extra special destructive spying on us is just fear mongering and villainization of Israel to serve other interests, not the interest of protecting the US. And using “America First” as an excuse to abandon allies is just silly. What you seem to mean is “Isolate America” because putting America first is not at all a simple task. We are a complicated country in a complicated world where what is best for America requires a whole lot more than just a simplified isolationist viewpoint.

Has Hamas finished digging out all the terrorists who were hiding in the tunnels when they collapsed last time?

And this is no surprise, of course. The leftist propaganda outlets know they are complicit in civilians dying. But, as their hero Stalin said, gotta break eggs to make an omelette

The links directly to the comments section are gone from the front page. It’s just un-linked text. (The link from the top of individual pages is still up there.)

Destroy it all today. Start with Pepsi factory, where the IAF should drop massive amounts of Pop Rocks.

Since China has scuttled the House Speaker’s trip to Taiwan, maybe Pelosi can visit the Pepsi factory in Gaza instead.

“….maybe Pelosi can visit the Pepsi factory in Gaza instead…..”

Wouldn’t it be a shame if IDF chose that moment to get proactive about destroying the Hamas tunnels?

This is nothing a few MOABs wouldn’t fix