“My dad respects me more than he respects anyone in the world, and I know that to be certain, so it’s not going to be about whether it affects his politics.” 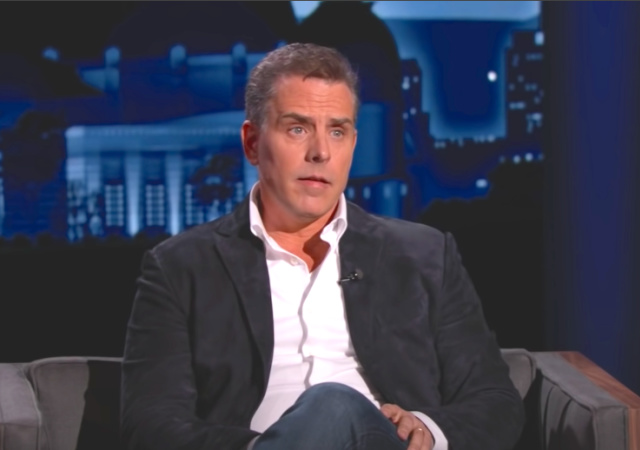 It seems like every few weeks we’re reminded of why Twitter, Facebook, Democrats and the media worked so hard to keep the Hunter Biden laptop out of the news before the 2020 election.

The latest example is an audio file that’s rather revealing.

Andrew Kerr and Jerry Dunleavy report at the Washington Examiner:

LISTEN: The moment Hunter Biden says his father will do anything he tells him to

Hunter Biden recorded himself boasting that his father will adopt political positions at his command, footage obtained from a copy of his abandoned laptop shows.

“He’ll talk about anything that I want him to, that he believes in,” Biden said in reference to his father, Joe Biden, in the Dec. 3, 2018, recording. “If I say it’s important to me, then he will work a way in which to make it a part of his platform. My dad respects me more than he respects anyone in the world, and I know that to be certain, so it’s not going to be about whether it affects his politics.”

“All those fears you think that I have of people not liking me or that I don’t love myself … I don’t fear that. You know why I don’t fear that? Because the man I most admire in the world, that god to me, thinks I’m a god,” Hunter Biden added in the 77-minute recording, which was taped about five months before Joe Biden launched his successful 2020 presidential campaign in late April 2019. “And my brother did, too. And the three of us, it was literally — I had the support to know I can do anything.”

The president’s son even mused about his cocaine addiction:

The conversation was taped at a house in Plum Island, Massachusetts, amid the throes of Hunter Biden’s addiction to crack cocaine.

“Have you ever thought about this: Maybe this is the greatest thing that f***ing ever happened to me,” Hunter Biden mused to Horan about his addiction to the Schedule II narcotic. “Maybe this is literally the continuation and the continuum of what is going to be the thing that makes me the person that my father believes I am.”

LISTEN: Hunter Biden says his father, Joe, will "talk about anything that I want him to”

"If I say it's important to me, then he will work a way in which to make it a part of his platform” pic.twitter.com/2ZyKVCnvYq

Bonchie of RedState makes the following observation about all of this:

I think what this shows is that Joe Biden’s proclamations about not being involved with his son’s other corrupt dealings just don’t pass the smell test. While we already have ample evidence (including photos) proving that’s not true, the fact that Hunter Biden was so involved with his father politically only strengthens the case that there was no degree of separation. Hunter Biden was not a bystander doing his own thing. He was intimately involved with his father, dictating to him, and then using that ability to dictate to peddle influence for personal gain.

Otherwise, he he might have a real scandal on his hands.

And all of this matter how? Joe Biden remains in office, and will at least until 2024.

Ask his dad to legitimately investigate the family corruption

That’s like asking Santa Ana to investigate the attack on the Alamo.

One has to wonder about the end game of all this. Bragging about their treason and criminality.

Very obviously NWO aka The Globalists are LOOKING for a revolution. Is it the thrill of rushing the entire world into Communism/fascism that they are so thirsty for? Are there new weapons or bio-weapons they are dying to try out? Or are they just THAT STUPID?

He brags because he thinks he is untouchable. Arrogance and stipidity seem to run rampant in Dem circles.

For the time being, at least, hecIS untouchable. And, likely will remain so.

I guess this makes Biden Sr. more addled than his drug ridden son.

Hunter wins on the perversion side though, but not by a lot.

Loving son… loving father. Joe always reminds us about his son…. Beau. As for drugs… would love to see them compare notes on what they have been and are on now… I must admit, that they have juiced Joe quite well… if that is Joe. Hoping a case report is in the offing…. “Optimal Dementia Medical Regimen for Leader of the Free World… A Work in Progress:.

That has to be the most PG thing on the laptop. The contents of that thing are horrific in the true sense of the word.

“My dad respects me more than he respects anyone in the world, and I know that to be certain”

When your son is a crack-smoking, kiddie-diddling, brother-cucking, whoremongering bagman, then really… what other choice do you have?

Doctor Jill’s expertise doesn’t happen to be in the field of psychiatry, does it?

This entire “national” family is wack.

Why respect a selfless, talented person who works tirelessly to help others when you can respect a narcissistic, whoremonger and drug fiend?