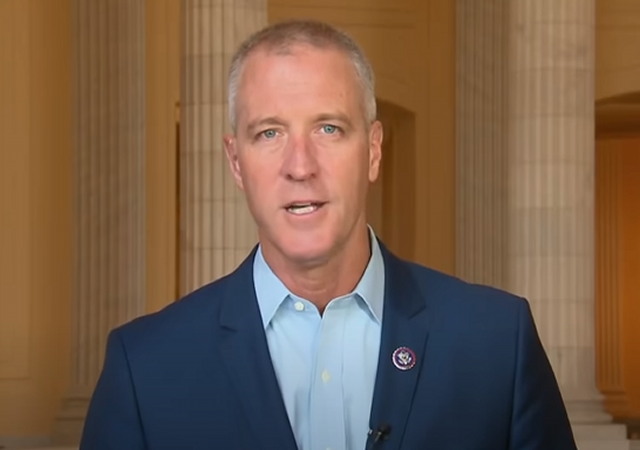 Democrats are facing a serious drubbing in November and they know it. This is causing some panic as people want to save their seats and limit the damage to the party as well.

Democratic Congressional Campaign Committee (DCCC) Chair Sean Patrick Maloney is doing his best to stop the carnage and has been rewarded with accusations of racism from progressives.

The catalyst for the infighting was a judge’s recent decision to squash the Democrats’ gerrymandering efforts.

‘Extinction-Level Event’: Democrats Melt Down, Accuse Each Other of Racism After New York Courts Upend Their Gerrymander

Democrats are turning on each other in light of the New York court ruling last month that struck down their gerrymandered congressional districts, with one black congressman publicly accusing Democratic Congressional Campaign Committee chairman Sean Patrick Maloney (N.Y.) of being a racist.

Multiple news sources, including Politico and the New York Times, reported this week that Democrats are fuming at Maloney, who as DCCC chairman is responsible for getting Democrats elected to the House. Courts on Monday unveiled new congressional districts, created by a nonpartisan special master, that not only reverse Democrats’ failed gerrymander but also “could pave the way for Republicans to make gains” in the deep-blue Empire State, the Times reported.

Maloney responded to the court decision by abandoning his old congressional seat and running instead in the newly drawn 17th district. That district is represented by a member of his caucus, progressive freshman Mondaire Jones, who will now have to decide whether he wants to face Maloney in the 17th district or ideological ally Rep. Jamaal Bowman (D.) in the neighboring 16th district.

Another ideological ally, Rep. Ritchie Torres (D., N.Y.), accused Maloney of racism, saying the chairman’s allies are spreading the message that Jones, who is black, “is ideologically ill-suited to represent a Westchester County District.”

Democrats accusing each other of racism will always be funny.

A black man is ideologically ill suited to represent a Westchester County District that he represents presently and won decisively in 2020?

The establishment seems to be backing Maloney.

Not every House Democrat is against Maloney’s primary bid.

House Speaker Nancy Pelosi, D-Calif., defended Maloney wanting to run in a district where he lives in a statement to Punchbowl News on Wednesday saying, “[SPM] said i’m running where my house is, that’s all I know that he said. and that’s a logical thing for people to do — where my home is. But we’re still hopeful there could still be some change.”

Rep. Jerry Nadler, D-N.Y., the longest serving Empire State representative in Congress who is in his own primary battle against long-serving New York Rep. Carolyn Maloney, said he believes that the DCCC chair can handle both “as long as he can compartmentalize.”

“It’s not going to be easy. Nobody said it was,” Rep. Bill Pascrell, D-N.J., said. “When he took his leadership position, he knew that was going to be a difficult task. … I’m confident that it’ll be alright.”

Pascrell fended off his own member-versus-member primary challenge a decade ago.

An anonymous Democratic aide also told POLITICO that Maloney “clearly has the confidence of his colleagues.”

“This sort of pointless sniping is detrimental to our efforts to keep the majority,” the aide continued. “We have an extremely capable DCCC chair who has demonstrated he can walk and chew gum.”

This is a vicious game of musical chairs, where the losers will be out of a job.

That’s what really matters to everyone involved here.

You know they’re serious when they retire instead of waiting to lose – like around 30-odd have already done. I wouldn’t be surprised if Nadler or Carolyn Maloney takes that route rather than run against each other.

Nadler is evil enough to rise further if Chuckie gets hit by a bus. Maloney is a failed benchwarmer with no prospects save being magically appointed to something better… and as a old, straight, white chick, the best she could remotely hope for is an ambassadorship to Estonia.

My money says Nader puts a hit out on Maloney.

Well, since it’s New York, I expect him to contract it with Barzini and the Turk.

“he can walk and chew gum”

That is quite a feat, though apparently doing both at the same time is out of reach for most Democrats.

“Democrats accusing each other of racism will always be funny.”

When you have to cleave to a rigid party program, the battlefield of ideas is off-limits. And that leaves you with either namecalling or bribery.

In the halcyon days of my youth, I fondly remember the Soviet Union taking to the airwaves several times each week to denounce other regimes as imperialist, or capitalist, or revanchist — most notably, their own allies who weren’t hewing closely enough to the party line. (Because it’s lame to try to insult capitalist countries with “you’re capitalists!”).

This is just the same game, different localization.

Accusations of racism against another Democrat is the closest any Democrat will get to the truth in this life.

I’ll say this about Torres: He’s probably the only one among the openly Marxist Democrats in the House who is sympathetic to Israel.

If he was not dependent upon the Jewish vote in his district, he’d fall in line on that, as well. Even “pro-Israel” “Jews” in the Democrat Party are smart enough not to make too big a fuss over the current direction of their party.

When we see widescale denouncements among my fellow Jews of Barack 0Bola, then and only then will you know the worm has truly turned in that respect.

Tough choice between Nadler and Maloney. Both are deeply evil, and both look like frogs. Different kinds of frogs, of course.

True, but the good news, at least apparently for now, is that one of those frogs gets boiled.

He can “walk and chew gum”, eh? That’s some leadership standard you’ve go there.

That is a rigorous standard when you look at Brandon.

Given that the Dems gave a one-finger salute to the State constitutional amendment in 2014 against gerrymandering, I find this quite entertaining. They could have done just a bit around the edges and gained a seat and solidified a few others, but just couldn’t control themselves.

Ah, the kryptonite for d/prog: competition. They absolutely hate the idea that their incumbency grift might end. It’s only going to get worse next census as blue States continue to bleed population to the Sun Belt red States. The blue States came close to losing another four CD this time. That only makes the next round even deeper.

I love it when the Democrats form a circular firing squad. Especially when their ammunition is their tiresome cry of “racism.”

Racism as ammo is OK, but I prefer 45ACP JHP for a circular firing squad.

The Democrats are the party of the KKK, Jim Crow and the eugenics-inspired murder of 20+ million babies.

Of course they’re racist fucks. Anybody who thinks otherwise is a moron.

What we’re seeing here is internecine battles within states that are losing congressional reps post-2020 census. It’s happening here in Calif as well as in NY, the only difference being that east coast Dems play hardball with one another whereas west coast Dems merely play soft ball. Should be entertaining to watch.