“UAPs [Unexplained Ariel Phenomenom] are unexplained, it’s true. But they are real. They need to be investigated. And any threats they pose need to be mitigated.” 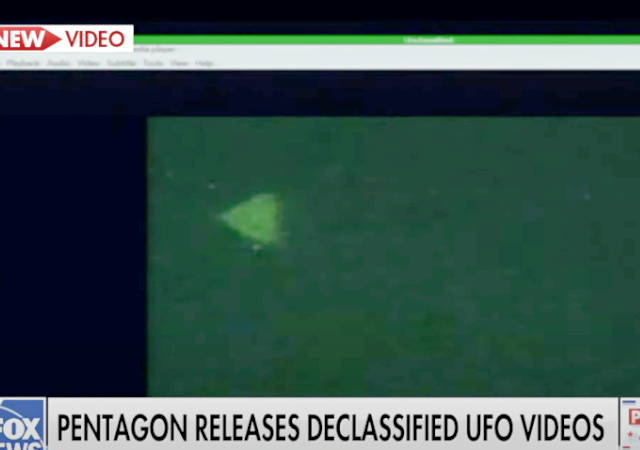 You have to remember that UFO stands for Unidentified Flying Object. A lot of us connect it to aliens but it could be anything.

Is there life beyond our planet? The Pentagon provided possible proof to Congress with declassified photos and videos. The military calls them Unexplained Aerial Phenomena (UAP).

Under Secretary of Defense for Intelligence and Security Ronald Moultrie and Deputy Director of Naval Intelligence Scott Bray explained to the House Intelligence Subcommittee on Counterintelligence, Counterterrorism, and Counterproliferation how the Pentagon organized all its reports on the UFOs:

“For too long, the stigma associated with UAPs has gotten in the way of good intelligence analysis. Pilots avoided reporting or were laughed at when they did. DOD officials relegated the issue to the backroom or swept it under the rug entirely, fearful of a skeptical national security community,” Carson said. “Today, we know better. UAPs are unexplained, it’s true. But they are real. They need to be investigated. And any threats they pose need to be mitigated.”

Last year’s report released by the Office of the Director of National Intelligence (ODNI) and the Pentagon’s UAP Task Force found no evidence to suggest the objects are extraterrestrial or from a foreign adversary — but the report also could not explain most of the objects.

The men held a classified hearing but in the public hearing, Bray said 400 sightings happened since the Pentagon released its report last year. They mostly happen “in military training areas or other designated airspace.”

Bray played some videos for Congress:

He showed lawmakers a video of one UAP observed by a Navy pilot in 2021, a “spherical object” that “quickly passes by the cockpit of the aircraft.”

“I do not have an explanation for what this specific object is,” Bray said.

The Pentagon has not recovered any wreckage. It also does not have proof the objects are alien.

The military does not have recorded collisions with these UFOS but Bray “noted there had been at least 11 ‘near-misses.'” They have never tried to communicate with the objects.

Horse manure! With billions of cameras at hand still the same grainy Pong game “objects”. It can all be explained by optics, weather, angles, equipment etc. Please leave this crap to the supermarket tabloids.

Lloyd Austin’s idiot Pentagon: I see your UFOs, and raise you one border.

I hope they don’t discover aliens from another planet because the US government is going to send them billions of dollars foreign aid.

And trying to figure out their preferred pronouns is going to be a nightmare.

I hope your check to the church of Scientology has cleared because your thetan level is going to need some serious scrutiny when Lord Zeno arrives!

Kent Brockman speaking for all the Democrat wet-noodle-spined lefties

I don’t know if the sightings are alien spacecraft or something else, but anybody who thinks that this is the only inhabited planet in the universe has to be lacking in imagination, to put it mildly.

I agree, it is likely that there is other life, but when one consideres the vastness of time and distance, chances of meeting them are remote.

I spent many years studying relativity, the math implies that things become infinately large or small as one approaches the speed of light, in other words it breaks down at that point. One way to consider this is that relativity does not say you cannot exceed the speed of light, I does say that your subset of the universe is everything which is moving at less than the speed of light relative to you.

Newton’s physics truned out to be less than the full storey, the same will know doubt be true for our current perception.

I wonder how long it will take to produce the next Einstein or Hawking.

As a young man I worshiped Einstein, as a young adult I was horrified by the way Einstein treated his wife. As an old man, I have come to understand Einstein’s point of view. Extremely high IQ isolates those who have it. High IQ is as much a curse as a blessing.

Yeah, I studied physics once upon a time, too, including relativity, but I agree with your point that we don’t know everything. We only think we do – and in an essentially limitless universe, the odds of there being creatures scientifically far advanced beyond what we’ve learned in the mere eye-blink that mankind has existed are pretty much 100%.

That, of course, doesn’t prove or even argue for the existence of ET visits to this little backwater of a solar system.

This is a great book makikng the case for just the opposite:

The faster you go the slower the time.
Zeno knows the singularity of time and motion is unacheiveable for if it were it would prove motion to be an illusion.

There is one unexplained UFO event in Northwestern Alaska back in early 1960’s when a large dark steel blue triangular UFO flew over several villages. That color and shape is a recurrent description.

That was unobtanium blue.

Haha – fooled you! It was really a trapazoid!

There are lots of things our government does that is never revealed to the public. The Pentagon certainly hasn’t been spending their unaccountable trillions on making weapons shinier anymore. In the 1940s through 60s, our jets were shiny. So were the UFOs. Then stealth capability became the thing and our jets went from shiny to matte. So did the UFOs. I wonder what that means? Let me think. Hmmm. Could it be? Nah. Too obvious. The Pentagon isn’t that dumb.

Not that I can explain everything, but having a professional background in video and photo analysis, I’ve never seen one of these and thought that a “normal” explanation was the unlikely one.

Anything to distract the peons, bread and circus

Here is my secondhand tale. True or not, I cannot say. I have no cause to doubt the witness.
Barry and his cousin fooling around in the back yard at age 17 when a huge triangular craft passed, point down, silent and illuminated down the sides with “unworldly” orange lights.
Barrys cousin laid a bead on it with a Mini-14 and squeezed off three rounds before his Aunt came out and observed for a split second then told them to knock it off, as they may have a laser beam in there.
South Carolina near Lamar, SC 1980.

The wife of our ultrasound tech was from GB and witnessed a UFO on a soccer field. there. ..orange glow.

I hear there might be some UFO’s over Iran in the near future. They say there will be an orange glow afterward.

“UFO’s are awesome, Omar. See that orange glow. That’s where our nuclear enrichment facility used to be.”

“Those UFO’s came from Israel, Abdul.”

If they exist, “mitigating threats” seems like a ridiculous objective. Ask the Native Americans how bows and arrows worked out.

My guess is that there are intelligent species out there against which we are primitive. I also guess that the most famous one, Roswell, is not a coincidence, but a logical response to some monitoring system that detected nuclear explosions – in other words the potential for destroying a very habitable planet. Think of it from an advanced civilization’s point of view.

Mary, you forgot about Mars Attacks.

President Dale: I want the people to know that they still have 2 out of 3 branches of the government working for them, and that ain’t bad.

The economy is falling apart, we are suffering the worst inflation in many decades, violet crime is increasing at a terrifying rate, massive food shortages are approaching, the price of fuel has doubled, nobody trusts our national elections, we have a senile moron in the oval office, etc., etc.

Yet the Congress has time to discuss UFOs.

Having fixed every other national problem—inflation, illegal immigration, the explosion of crime in Democrat-controlled cities, the baby formula shortage, supply chain issues, etc.—the Democrat run Congress turns to the vital issue of UFOs. We need some 1776 Spirit to rid us of these frauds.

There are no alien spacecraft. This is another psyop.

Yeah, and if it’s intelligent life they’ll stay as far away from us as possible.