Parent: “school officials needed to reflect on what happened… there needs to be consequences for those who were responsible.” 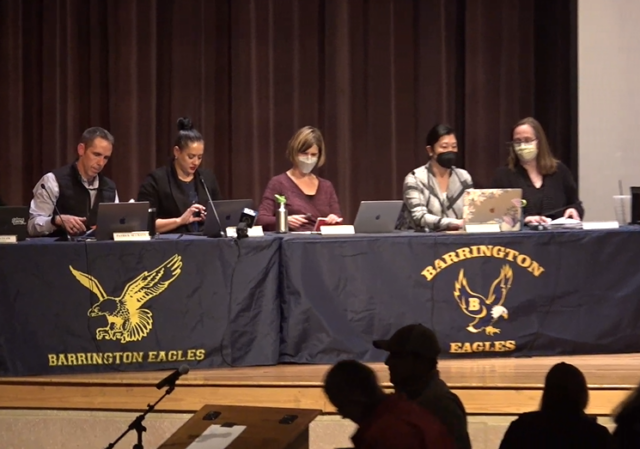 We followed up after the story burst on the national scene, Parents Revolt Against “Equity” Agenda In Barrington (RI) As School District Drops Precipitously In National Rankings:

It wasn’t always this way. The town once known as “Borrington” because nothing much happened now has become a hotbed of woke activism with progressive Democrats controlling the Town Council. Controversies have included the town flying the BLM flag over the Veterans Memorial, and then stripping the local veterans group of its role organizing the Memorial Day Parade after it protested. The Town Council even sponsored as an official town event an appearance by Ibram Kendi, which refusing to sponsor an alternative viewpoint.

This activism also has found its way into the school system, with an equally woke School Commitee, where “Diversity, Equity and Inclusion” has reached near-religious dogma. The Equity part of the agenda has involved de-leveling — the reduction or elimination of accelerated and honors courses that were the lifeblood of the top-rated school district in the state.

Coverage by Fox News went viral, Rhode Island parents enraged at school board for removing honors classes in ‘equity obsession’. Barrington mother Ellen Schaffer was featured in our prior post, and was interviewed on Fox & Friends First:

The committee said the honor classes will be offered to freshmen and sophomores.

The move is after some parents came out against a plan to eliminate honors-level classes next year.

The district said it was partly an attempt to make classes more equitable.

Students not taking the honors course can get an honors distinction option if they prefer.

Details about that will be shared later.

The Barrington Times adds details, including how parents are questioning the use of an outside consultant that led to the deleveling:

Parents shared their thanks with school officials during a meeting Thursday night after learning that Barrington High School is bringing back dedicated honors courses next year and an improved honors distinction option.

Kara Kelley said she was pleasantly surprised by the changes presented during the Barrington School Committee meeting. Kelley, who had spoken in opposition to the removal of honors courses at a prior meeting, said Thursday night’s presentation of the new honors program “felt like progress.” She also offered a few suggestions to school officials as they continue fine-tuning the new honors program.

Other parents said school leaders needed to reflect on the moves that led the district to first call for the replacement of honors classes with an honors distinction option, and then eliminate that option altogether….

Smith said the year-long issue was not Hurley’s fault, but had been thrust upon him by others. He said a paid consultant had led the district to make the changes to the curriculum, likely referring to Katie Novak. He said Barrington Public Schools had paid her $50,000 a year. He also blamed the decision on Paula Dillon, Barrington’s assistant superintendent of curriculum.

Smith said school officials needed to reflect on what happened. He said there needs to be consequences for those who were responsible. Smith also said it is time for the community to heal….

[School Committee member] Patrick McCrann said that while he liked the changes planned for the honors program, he was still unsure why school officials had first decided to alter the program. He asked for the data that supported the initial, failed change. He asked school administrators what problem they were trying to solve when they first decided to eliminate honors courses.

This is an important victory that relects parents uniting against “woke” ideology being pushed under an “equity” agenda. That the parents movement erupted in blue Barrington, in deep blue Rhode Island, is a sign of how powerful it has become.

This is good news for Barrington, but what this means in Rhode Island is: Two steps forward, one and one half steps back.

Good win for normal people. Now don’t ever turn your backs on the people you defeated. Always verify, never trust.

100% correct. We need smaller, more flexible schools that cater to appropriate needs. Government can retain certain roles but it is way past time to retire this dinosaur system that serves only unions and Democrats at the expense of students.

Janteloven (“Tall Poppy Syndrome”) is an unspoken tenet of Marxism:

You’re not to think you are anything special.

You’re not to think you are as good as we are.

You’re not to think you are smarter than we are.

You’re not to imagine yourself better than we are.

You’re not to think you know more than we do.

You’re not to think you are more important than we are.

You’re not to think you are good at anything.

You’re not to laugh at us.

You’re not to think anyone cares about you.

You’re not to think you can teach us anything.

What I find heartening is that of the four parents mentioned by name in the Barrington Times account, three are registered Democrats, and one is an independent.
The left is indeed committing suicide by overreach.

When have they not? Sure, they can implement their socialist and radical ideas incrementally over time, but when they get the reins of power (don’t whip me!), they invariably drive the country into a ditch. Make that off a cliff.

Case in point: the Biden regime. Pick any topic.

“De-leveling” is yet another scheme by the left to provide a trophy for everyone, in this case, a diploma, regardless of achievement.

It is simply a means of making schools generators of mediocre students, with one size fits all education, without even the decency of a pass/fail level of achievement.

I lament the latest trend towards no textbooks. In my high school, there are no textbooks. Even students complain. Even in light of the ridiculous pricing by publishers, texts are fundamental to learning, and don’t require electricity or potential distractions in the form of constant notifications on your screen.

China and the rest of the world continue to laugh…