“Footage shows police officers facing scores of flag-waving and chanting Palestinians at the St. Joseph Hospital compound in East Jerusalem, who then began throwing stones at the forces and the hospital.” 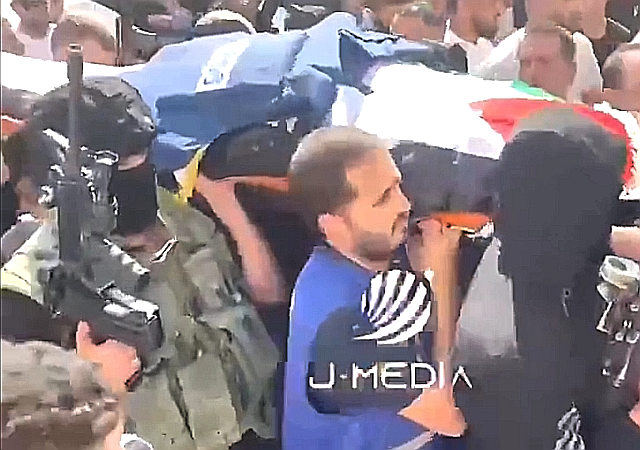 As Palestinian rioters used the funeral of Al Jazeera journalist Shireen Abu Akleh to incite violence in Jerusalem, the mainstream media is again portraying the Israeli security forces as aggressors and siding with the Palestinian mob.

On Friday, Israeli security forces was forced to intervene after Palestinian rioters were seen using the coffin of the Al Jazeera journalist as a shield as they threw rocks at the police present at the scene.

“The rioters gathered in the hospital before the funeral began, calling out inciting messages and throwing rocks and other objects. The rioters even damaged the procession vehicle, attempting to prevent it from transporting the coffin,” the Israeli police said in a statement obtained by the Legal Insurrection. “In light of this, police officers were forced to make arrests in order to ensure the funeral could continue suspects who disrupted public order have been arrested,” the statement added.

The police also accused the rioters of carrying out “violent pre-planned provocations,” and “cynically exploiting the funeral procession in order to incite.”

The video footage from the scene seem to confirm their assertions. “Footage shows police officers facing scores of flag-waving and chanting Palestinians at the St. Joseph Hospital compound in East Jerusalem, who then began throwing stones at the forces and the hospital,” the Israeli news outlet Ynet noted.

The Times of Israel reported the Palestinian rioting at the funeral:

Israeli police said late Friday that officers intervened in the funeral of Al Jazeera journalist Shireen Abu Akleh in Jerusalem earlier in the day after “rioters” seized her coffin at the hospital, against her family’s wishes. (…)

“About 300 rioters arrived at Saint Joseph hospital in Jerusalem and prevented the family members from loading the coffin onto the hearse,” police said in a statement late Friday night.

Law enforcement had planned and coordinated the funeral procession with Abu Akleh’s family ahead of time, the English-language statement said.

“The mob threatened the driver of the hearse and then proceeded to carry the coffin on an unplanned procession,” the statement said. “This went against the wishes of the Abu Akleh family and the security coordination.”

Police instructed the crowd to return the coffin to the hearse, “but the mob refused,” police said.

“Police intervened to disperse the mob and prevent them from taking the coffin, so that the funeral could proceed as planned in accordance with the wishes of the family,” the statement said.

The Israel Police prepared yesterday to facilitate a calm and dignified funeral for journalist Shireen Abu Akleh, and had coordinated the funeral arrangements with her family. Unfortunately, hundreds of rioters tried to sabotage the ceremony and harm the police

Al Jazeera’s Abu Akleh was killed on Wednesday while reporting from the Palestinian city of Jenin, a Palestinian Islamic Jihad (PIJ) stronghold. The bodycam video released by the IDF show Israeli soldiers coming under heavy gunfire in Jenin at the time of the incident. The Palestinian Authorities (PA) rejected the Israeli offer for a joint investigation into the shooting and refused to handover the bullet that killed the scribe for a forensic probe in Israel.

The mainstream media outlets were united in their condemnation of Israel. They accused the Israeli police of “beating” the Palestinian “mourners” and of “attacking” the funeral procession. CNN aired the video of the riot claiming that it showed “Israeli police beating mourners.” The Washington Post peddled the same one-sided narrative alleging that “the Israeli police pushed and beat pallbearers during the funeral for slain Al Jazeera journalist.”

Without giving Israel a fair hearing, the Biden administration, too, appears to be siding with the Palestinian rioters.

The Biden administration on Friday harshly criticized Israel over police violence at the funeral of journalist Shireen Abu Aqleh – a Palestinian and US citizen – who was killed earlier this week during an Israeli operation in the West Bank. (…)

US Secretary of State Antony Blinken said the United States was “deeply troubled by the images of Israeli police intruding into the funeral procession of Palestinian American Shireen Abu Akleh.” (…)

White House Press Secretary Jen Psaki, who described the images as “deeply disturbing,” said the US is in close contact with Israeli and Palestinian authorities, working to bridge cooperation between the two sides.

In the midst of this anti-Israel chorus from the media and leftists trolls, some sane voices tried to set the record straight.

This is a new low… We’ve seen Palestinian extremists like Hamas use women and children as human shields, but today they used the dead body of #ShireenAbuAkleh as a human shield as rioters destroyed neighborhoods in Jerusalem.

The Israeli social media influencer Hananya Naftali broke down the footage of the incident to show how Palestinian rioters weaponized the funeral procession.

While the Biden White House and the Liberal media criticizes and smears Israel, the Jewish State continues to pay the price for defending its citizens against the onslaught of Palestinian and Jihadi terrorism, which claimed a total of 19 lives since it surged in mid-March.

On Friday, Palestinian terrorists shot dead a senior Israeli counterterrorism officer during an operation in Jenin, the same city where the Al Jazeera scribe had died of gunshot wound on Wednesday.

“Noam Raz, a veteran counterterrorism officer was killed in an Israeli operation near the West Bank city of Jenin on Friday, the Israel Police confirmed,” the newspaper Israel Hayom disclosed on Friday. “Raz, 47, was mortally wounded when Palestinian terrorists opened fire on Israeli troops during a raid in the city, a known Islamic Jihad stronghold. He was airlifted to the Rambam Medical Center in Haifa where doctors spared no effort to save his life, but to no avail.”

Leftists are Anti-Semitic group since the Russian Revolution.

The governing spectrum ranges from anarchist to totalitarian, libertarian to authoritarian, the left-right nexus is leftist. The Soviet revolution only marked the a notable milestone in the left progression with a notable diversity dogmatism (i.e. color judgment, class-based bigotry).

And yet Jews by accident of birth continue to support Brandon and the DemoncRats.

Jesus the world is insane and America is lost
I’m at the Trump rally in Austin right now
Some guy got on and was inviting people to join him for lunch right now and be part of the inner circle for 35,000$
I thought it was a joke

With Republicans, it’s always a club for the rich. Like Democrats, all they want from the peasantry is donating and votes. Then, they ignore us.

Yesterday, when I saw a headline saying, “Israeli police attack funeral” I knew it was BS. It was Reuters, though, and they are among the biggest anti-semites out there. I didn’t even bother to read the story since it was guaranteed to be all lies anyway.

Thanks for posting the truth.

There’s more than one bias at work here. In addition to hating Jews the left hates law enforcement. Remember this is the same administration that falsely accused mounted border patrol agents of “whipping” Haitian illegals attempting to cross into the US. Apparently they don’t know reins are used to control your horse. And despite being proven wrong, the agents were cleared of wrongdoing, the Biden admin has not and will never apologize. And they’re using their lie as an excuse to deny CBP the vital tool of horse mounted units

Thanks for publishing the rest of the story. This one looked like more Palestinian manipulation from the get-go.

What?!?! You’re telling me that the vile Dhimmi-crats are once again engaged in their perennial, predictable, slavish and indefensible whitewashing, rationalizing and excusing of Muslim supremacist/terrorist violence, while simultaneously obnoxiously and despicably blaming Israeli Jews for possessing the temerity to defend themselves against the genocide-aspiring predations and attacks of Muslim supremacists/terrorists?

I actually quite baffled at Brandon and the MSM’s anti-Israel and pro Hamas at all cost’s position. Anyone care to speculate without the usual “Obama is a Muslim” stuff?