Karine Jean-Pierre worked as a national spokeswoman for MoveOn.org, an anti-Israel group. 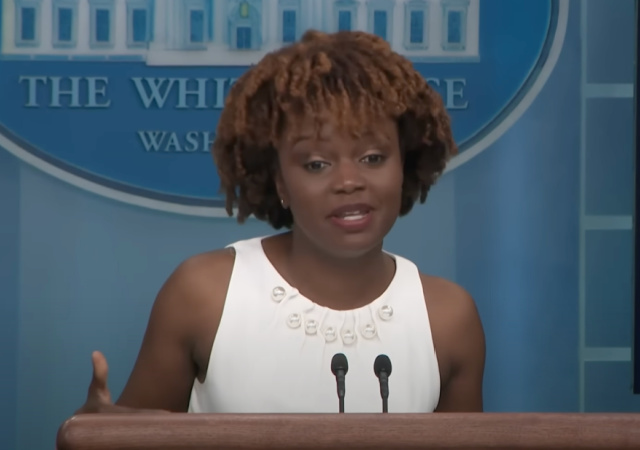 Karine Jean-Pierre will become President Joe Biden’s press secretary after Jen Psaki leaves on May 13. She worked as a senior adviser to Vice President Kamala Harris before serving as principal deputy press secretary in the administration.

But ethics questions immediately surfaced because she’s married to a CNN reporter. From The Washington Free Beacon:

But her relationship with the CNN reporter raises ethical questions about her new role. The White House did not respond to a request for comment about whether Jean-Pierre would recuse herself in dealing with CNN. Malveaux’s colleagues include Valerie Jarrett’s daughter, CNN justice correspondent Laura Jarrett, and Israel ambassador Tom Nides’s wife, Virginia Moseley, who serves as CNN’s senior vice president of news gathering.

“Suzanne Malveaux will continue in her role as CNN national correspondent covering national/international news and cultural events but will not cover politics, Capitol Hill, or the White House while Karine Jean-Pierre is serving as White House press secretary,” a CNN spokesperson told the Washington Free Beacon.

Jean-Pierre’s anti-Israel past—which includes a stint as senior adviser and national spokeswoman for MoveOn.org, a far-left anti-Israel group that advocates for boycotts of the Jewish state—is raising red flags in the pro-Israel community. The selection of an Israel critic is also likely to further strain ties with the pro-Israel community and Israeli government, which already is strongly opposed to the Biden administration’s efforts to ink a new nuclear deal with Iran.

Jean-Pierre has been open about her animosity toward the Jewish state. She has accused Israel of committing “war crimes” and has backed efforts to boycott the American Israel Public Affairs Committee, the United States’ most prominent pro-Israel lobbying shop, cheering Democrats in 2019 for boycotting the group’s annual gathering in Washington, D.C., for “boldly [choosing] to prioritize diplomacy and human rights over the power of a lobbying organization.” AIPAC, she claimed, helped the Trump administration “sabotage” the Iran nuclear deal and also “supported the group that’s credited with inspiring President Trump to enact the Muslim Ban and has been known to spread anti-Muslim racism.” She accused the group without evidence of trafficking in “severely racist, Islamophobic rhetoric.”

MoveOn endorsed anti-Israel Reps. Ilhan Omar and Rashida Tlaib. It has also defended the women when they make anti-Semitic and anti-Israel statements.

The organization stood by Linda Sarsour whenever she made anti-Semitic statements.

Oh, look. MoveOn defended communist activist Angela Davis, who lost an award “due to her anti-Semitic past.”

But the left will use Jean-Pierre’s skin color and sexual orientation as a shield so we cannot criticize her.

If every replacement staffer appointed has to check off more politically correct boxes [race, gender, gender preference, ideology, past employment with entities that hate this country, etc.] assuming that we are still kinda-sorta a republic by say late 2023; finding White House staff is going to be a real bugger [no that is not a reference to the third box listed].

“New Press Secretary is Married to CNN Reporter, has Anti-Israel Past”

That makes her a perfect with with this administration. No, wait. I might be wrong about that. Does she take bribes?

What a relief! I never really understand anything until a black lesbian explains it to me.

And therefore, she will be untouchable by criticism, because, of course, to do so would be racist or lesbophobic or something…

I would expect nothing better from the pedophile Brandon administration.

I will cite Buick city in Flint Mi as an example of this. Most people do not want to live close to noisy, smelly, high traffic areas. So, in the absence of more demand for more businesses in the area, adjacent land is not in demand and poor people live there by choice over lower costs.

Those people are often slovenly, steal everything they can, and their presence drives increasing security costs. Eventually, businesses close over this situation.

Businesses become victims of low life schemers looking to extract money, one example being these claims.

The problem is that the argument works regardless of the order of cause and effect. Poor people live in less desirable areas. Less desirable areas are almost always less clean, healthy, sanitary, attractive. Marxist “equity” will never be served until an equal number of rich and poor are living both under bridges and in $6M BLM mansions.

Start with Streisand, Alyssa Milano and Cher, followed up with Zuck and Gates.

A good start, as they say.

It’s worse than most of us understand:

With her qualifications, why on earth was she passed over for the SCOTUS seat?

“Married”. So when Peter Doocy goes hard on her (pun intended) she’ll be able to play her black gay woman trap card.

This administration is a clown show

And the Republicans in the Senate and Congress are playing along.

Not true. Her hair isn’t red like the other two recent clowns (Jen and the 1619 idgit) 😉

If ONLY it was a clown show. The ‘administration’ is more like the SS during WW2. And I’m not exaggerating.

Can we still say “slavering?”

Asking for a friend…..

A Dhimmi-crat who hates Israel — no surprise, here, as this attitude is now pervasive, accepted as laudable, and, constitutes an ideological prerequisite for Dhimmi-crats in all Party roles.

A dhimmicrat who is gay, supports abortion to the last day?

She is an intersectionality worshipper.

Calling a Democrat a Dhimmicrat is exactly the same thing as calling a Republican a Jewican.

Our policies are perfectly in line with the Orthodox Jewish community who votes over 90% for us, orthodox communities could be the difference between us controlling or not controlling congress in a non-wave year election, we are an extremely and reflexively pro-Israel party (you will see the way “News” from conflict is done on LI takes a 180 degree turn if it becomes another Israeli conflict instead of the copy pasting from MSM done now), our position on social issues are positions seminaries for orthodox rabbi would approve of.

Blaming a religious group for a party you don’t like is the definition of bigotry, and I thought you had moved on from that and taken up the appropriate term “Dumbacrots”. But the term Dhimmicrats is every bit as bigoted as the term Jewican and I believe I have just demonstrated the left would have as much basis for that anti-semitic term as you do for the term Dhimmicrat.

Oh, look! A black female! How quaint! I mean, how trendy!
And a lesbian, to boot! Stunning! Bold!
If we’re lucky, we’ll discover she’s also “on the spectrum.”
You can’t hit too many checkboxes!

It’s also odd to see MoveOn cited as an “anti-Israel lobby.”
Do we all remember how and why it was founded?
It was to run interference for Bill Clinton when the news cycle was obsessed with his infidelities with his young intern.
Its purpose was to hammer on the talking point that this was “all old news now” and that “America should move on from this story.”
If the movie “Up” had been released before that date, the organization might have been called “Squirrel!” instead.

I’ve been saying this for well over several decades: Jews wasted their time on the civil rights movement.

Worse: LIBERAL Jews wasted other Jews on the civil rights movement. There is no greater existential threat to world Jewry than liberal Jews. None.

Seems like a prime source for senior administration members is the new startup called Devients R Us.

Reminds me of a guy I know that takes pictures of himself with his Downs grandchild at Univ of SC football games to deflect criticism. Don’t you dare make a snarky comment about the Gamecocks losing to The Citadel! You hate this child, you deplorable meathead!
The old “Human Shield”.
Straight out of the basket of deplorables.

….and when Clemson loses a game, he is the first to pepper your FB page with ridiculousness.

Let’s see how she does. I don’t expect she can lie like Jen. Last time I saw her filling in for Jen, she didn’t have any answers so this should be fun to watch.

You mean: lying and bitchy?
Psaki set back women a hundred years.

The Disintegrating States of America – what a sick, perverted society; led by the peoples’ choice of a dissolute mediocrity, a corrupt depraved kiddie sniffer.

The best your best people can do when faced with it in person is to giggle in an embarrassed, nervous fashion and stand frozen, having lost any sense of offence and the need to maintain dignity. You should act instantly, throw him off the stage. He shames you and you stand motionless and ashamed.

Doocy playing Whack-A-Mole with her is going to be so entertaining.

Pretend married, if that. It’s another girl we’re talking about, not a possible husband.

TheFineReport.com in reply to ThePrimordialOrderedPair. | May 7, 2022 at 4:52 pm

They’re in a cult, it’s that simple. An argument can be made that that most religions are cults, but except for one religion, established religions are not sinister in their goals or in their practices. Then again, there is the Catholic Church during its child molestor days, and its present day with a lunatic communist as Pope.