One protester thought Coney-Barrett doesn’t have any idea what it is like to have a pregnancy full-term. 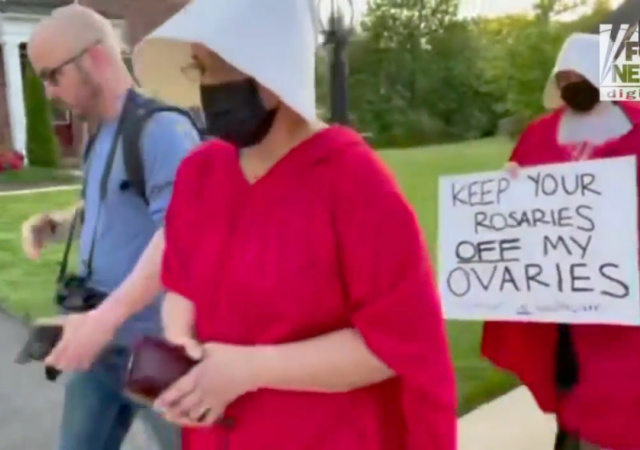 A bunch of ladies dressed as characters from The Handmaid’s Tale protested outside of Justice Amy Coney Barrett’s house because of Justice Samuel Alito’s leaked opinion overturning Roe v. Wade.

One protester said ACB doesn’t know anything about a full-term pregnancy. The justice has five biological children.

When someone told her about this the protester said, “Not everybody wants to have five kids or four kids or one kid.”

Isn’t she a smart one?

Another one had a sign, “Keep your Rosaries off my ovaries.” She does not have a problem with Catholicism, but doesn’t think religion “cannot dictate how they carry out their job as a public official.”

Someone tell these bright young people that science backs up the Catholic teaching on abortion.

Protestors outside Supreme Court Justice Amy Coney Barrett’s house. They recognized me and tried to taunt me. pic.twitter.com/WCF11iCCWg

Pro-abortion protester tells me America will be like The Handmaid's Tale of Roe v. Wade is overturned. pic.twitter.com/F3ygVIFIGS

Spoke with one of Justice Barrett’s neighbors. He says the protestors should “Go home and get a family.” pic.twitter.com/wBWLWOJfAt

Handmaid's Tale has finished their pro-abortion protest at Justice Barrett’s house. It lasted about 10 minutes. pic.twitter.com/luBMNGi9Eb

Justice Amy Coney Barrett is literally the feminist dream come true. It's so funny to me to see these so called feminists cosplaying as sex slaves, acting out a dystopian fantasy to protest an actual feminist icon because she happens to be conservative. https://t.co/nhPXdVBnEM

Were it not for sensible women like Miss Slippers, I’d like to see the 19th Amendment reconsidered at the Convention of States.

Who cares about sensible women when they are so outnumbered? Isn’t Hester wearing her apron a bit high? The scarlet A would be quite an appropriate addition to the ensemble.

I didn’t realize that head lice was so common with liberal women and that measures to prevent scratching were necessary,

Nonsense. Me, I’m just pleased as punch to see all these enlightened liberal women appropriately honoring their spiritual kinship to the contributions of Giovanni Battista Bugatti.

They stole the word, debased it, then fled the ruins they made of it.
Let them wear it now as an albatross around their necks… or dogshit on their shoes.

I would like to have this debate – as in a Lincoln-Douglass debate, not a “soundbite” debate. As a woman who attended a women’s college near Seneca Falls, I am well-versed in the early Suffragist movement. I have many supporting reasons for believing that the 19th amendment was a good move for our country; I have many opposing reasons based on the direction of the country since then.

I have shocked people wordless when I have questioned the 19th amendment. Both those who know my personal historical study of the issue, and those who just see a woman.

I think a debate would be a healthy exercise to see what is and is not useful. I *think* that women having the right to vote outweighs not, but I would welcome the discussion.

For example, without the vote, women could not own property in their own names, have bank accounts, lobby for their businesses (certain exceptions did, of course, apply), leave an abusive husband or father.

Perhaps a better voting would be property owners or tax payers or (clutch-my-pearls) a civics test.

“ Perhaps a better voting would be property owners or tax payers or (clutch-my-pearls) a civics test.”

How about requiring a HS diploma or GED along with a requirement to be a productive citizen? Productive defined as:
1. If working age and not disabled then be employed
2. A. If unemployed be on short term unemployment (less than 26 weeks)
OR
2 B. be fully financially independent; not in receipt of any unearned benefits.
3. Residency 60 days from first early voting day
Defined as establishing primary domicile; the location where you sleep when you are not at work. Students still claimed as dependents for federal income tax would be domiciled at their Parent’s address. Military continue to use ‘home of record’. Shift all other govt employees to same HOR system. Same for working or living abroad long term but temporary.

Just want to add that men voted for the 19th Amendment. And as you’re acquainted with the suffrage movement, you must be aware of the exceptions to women voting in some states and holding property, etc.

Reasonable people can be persuaded unless we speak about delusional leftists.

without the vote, women could not own property in their own names, have bank accounts, lobby for their businesses (certain exceptions did, of course, apply), leave an abusive husband or father.
Ummm, history shows otherwise. Majorly otherwise.

Things changed in early America. Women slowly started to have those rights, usually as widows first. And like I said, there were clear exceptions. Americans on the frontier were much more likely to ignore the law against women because there were so FEW women. But as an area became “civilized” women’s rights declined. One of the reasons women in the American west gained suffrage before the eastern states. Yes, history shows otherwise, but it was a slow process.

For example, without the vote, women could not own property in their own names, have bank accounts, lobby for their businesses

Is that true? Women owned bars (publik houses) during the Plymouth Colony.

True, when Plymouth was a colony. Also, were these woman married at the time, or widowed or never married? In colonial Virginia, women – mostly widows – owned land, slaves, equipment, etc. By the time that frontier came into statehood, many of those rights were restricted. It is actually fascinating to watch the rights of women when a settlement was struggling to survive and then 80 years later when it was a civilized city/state; this pattern traveled west with the American Frontier. 200 years after Plymouth, Elizabeth Cady Stanton could not own property in her name – her father or husband had to have control of it.

It’s ALWAYS the women who have a slim-to-none chance of getting laid who crow the loudest about ‘abortion’.

I have a lot of women relatives and not one of them, even the crazy ones that might engage in a protest like this, would make such shoddy sad looking Handmaid’s dresses. These dresses are a simple design and should be easy for even a novice seamstress to make well but nope crappy looking and ill fitting.

Expecting them to know how to sew is sexist! /must I?

So the poorly constructed costumes are a subtle part of the message. I didn’t pick up on that..

On the other hand I could also make a better one of these dress/cloak things.

Actually, they probably bought them from a maker in China. Hence the shoddy workmanship. I doubt they know which end of the needle to put the thread through.

Probably grabbed them at the 50% off, post Halloween sales….

Nothing says loser like thinking fiction is real, or making fiction real, i.e. using 1984 as a manual vs. a warning.

Or sex education, otherwise they would’ve learned how to prevent contraception instead of being “forced” to have babies.

You’re talking about people who couldn’t be bothered to learn to cook beyond Hamburger Helper and Duncan Hines. Then again, most of them don’t have anyone else to cook for anyway.

Handmaids bray a handmade tale while strutting and fretting with strawmen.

ACB may have borne 5 children, but has missed out on aborting a full term baby, the policy position of the Baby Killer Party. /s

I mentioned this on a another site with this story.

Who the hell is that one that’s literally like a foot and a half taller than the others!?!?!?

Oh, and OF COURSE.

Every single one is wearing masks, and some of them are wearing doubles.

Maybe time for the States to return to enforcing the anti KKK laws that prohibit covering your face? Outdoors there really isn’t n much justification for wearing a mask for health reasons. Even it there was none of the images appear to show N95 masks being worn which is the minimum level of PPE that shows any benefit.

It’s against federal law! Arrest every one of these lunatics and send them to a Turkish prison for a month, or five.

Highest incarceration rate in the world yet so many criminals running around out there, especially those whose crime is failing to uphold the rule of law.

We know the Federal government is AWOL on this because Brandon has chosen to violate his oath of office. Where though is the state government on this matter?

Isn’t it appropriate that they confuse a movie with reality?

I would like to have that guy as my neighbor.

Black (antifa-chic) face masks..a stunning match for the ensemble. Don’t they know that their next abortion will be a mixed vacation-procedure funded by their leaders. This is the Handmaids Tale doppelgänger…instead of having babies… aborting them.

If only she were on the school board, then the FBI could start cracking skulls.

Yes the Bee went there already, but this point has to be hammered.

“Keep your rosaries off my ovaries” is a feminine rhyme.

To the extent that such a protest is for the photo op, it would be hysterical (to me) to deploy a counter protest of Harpo and Groucho look-alikes to chase them around, groping wildly while chomping cigars, honking horns, and especially if Harpo does his legging routine … if they stage a die-in, bring in a truck filled with sand and men with shovels start burying them …

It just seems like there ought to be more counter protests intended to embarrass the $h!t out of them, turn their photo-op into a laughing stock, and dissuade them from further …

Maybe through dismembered doll parts at them?

Those outfits are not too different than burkas. Just change the color to basic black and they are good to go. Take the next step toward oppression ladies. I’m sure you’ll love it. It’s totally rediculous.

Think I’ll get a Handsmaid Tale outfit and stuff it with straw.

Your garden will thank you.

How many plants working on orders from Garland are in the crowd?

They accused Trump of insurrection for saying the word “fight.”
Groot just issued a “call to arms” against the Supreme Court.

The brain-deadedness of this country’s “progressives” is as astounding as it is rampant. How do these individuals manage to make it, unscathed and in one piece, on a daily basis?

That’s why they need the government to do everything for them. The “progressive” colleagues I’ve had have always been complete trainwrecks when it came to handling simple, basic life tasks. Their clothing was always wrinkled and stained, their cars were barely running and held together by their bumperstickers, none knew how to cook so they were always overweight loads from all the takeout they ate. But boy they sure knew how the entire globe and the economy should be arranged and operated – just put people like them in charge!

Spoke with one of Justice Barrett’s neighbors. He says the protestors should “Go home and get a family.”

I have met the enemy and she lives alone on my cul-de-sac.

As a traditional Christian with German Jewish ancestors and who has lived in places where the whole idea of female literacy was introduced by Christian missionaries, I find Attwood’s _Handmaid’s Tale_ to be the kind of hate- and fear-mongering that would make the d—-d soul of Julius Streicher smile in the depths of Hell. I even let my local classical music station know that I would be withholding a yearly donation for their sponsorship of a theater production based on it.