100 Year Old WWII Vet: “I was in the company of better people, way better than myself”

100 Year Old WWII Vet: “I was in the company of better people, way better than myself”

Benny Chelo was the honored guest at the Memorial Day Ceremony held by the Barrington (RI) United Veterans Council, the group removed from running the town Memorial Day Parade by a vindictive Town Council in retaliation for objecting to the BLM flag flying over the Veterans Memorial. 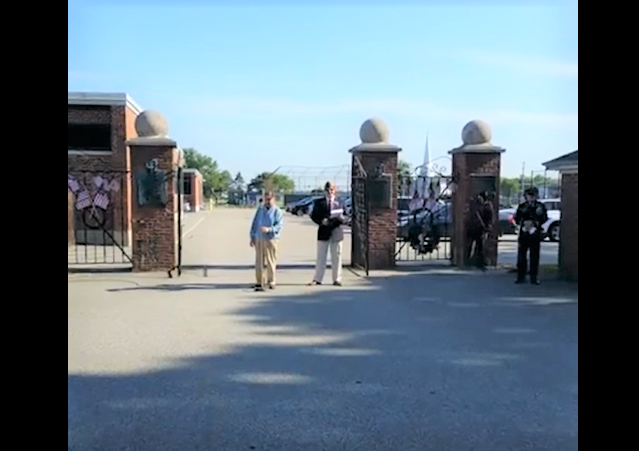 Memorial Day in Barrington, Rhode Island, where Legal Insurrection is based, was taranished by a gross and vindictive politicization of the holiday by the progressive Town Council.

The Memorial Day Parade had been run for 68 years by the Barrington United Veterans Council (BUVC), but that leadership was pulled in retaliation for the BUVC, particularly its President Retired Lt. Col. Paul Duchilos, objecting to the Black Lives Matter flag being flown on the town flagpole over the Veterans Memorial. The BUVC opposed all political cause flags in that location, but the Town Council was particularly obsessed with the BLM flag. We covered the dispute in great detail in March 2022, Veterans Group Alleges Retaliation For Opposing Flying BLM Flag Over Barrington (RI) Veterans Memorial.

The BUVC nonetheless honored its tradition of holding a Memorial Day commemorance, but the town went ahead on its own using a special extra budget allocation and town employees to organize a parade to start right after the Council’s event. I didn’t attend the town parade, but from videos posted online it seems that some of it was inappropriate for a Memorial Day parade, including throwing candies to passers-by,  blowing bubbles, and theme t-shirts. Not having organized a Memorial Day Parade before, perhaps the Town Council confused it with the 4th of July.

The BUVC event was dignified and very appropriate for the solemnity of the day. There were over 100 people present, and the ceremonies included what you would expect: The raising and lowering of the American flag, the reading of the names of Barrington residents who died in various wars, and various statements and reflections. 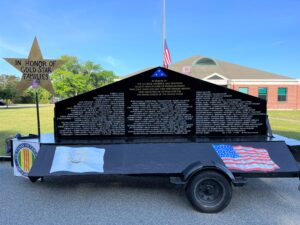 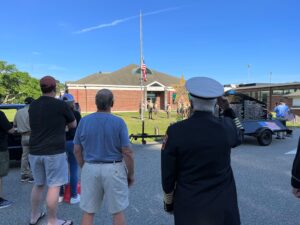 But by far the star of the show was World War II veteran Benny Chelo, who turns 100 this week.

Lt. Col. (Ret.) Paul Dulchinos, President of the Council, made the introduction, followed by comments from Chelo:

Dulchinos: “… The Barrington United Veterans Council was formed in 1954 and has faithfully led Memorial day observances for the past 68 years, rain or shine. However, before you proceed this [wreath laying] ceremony today, I’d like to pause for a moment to recognize a distinguished special guest. He is a World War II, Coast Guard Navy veteran, who will turn 100 years old on June 4th. He was assigned to the USS LST 202 tank landing ship and participated in several combat landing missions and support of U.S. military operations in the Asiatic Pacific theater during the war. A Barrington resident since 1972. Ladies and gentlemen, Mr. Benny cello, please come forward ….

Benny Chelo: “…. Let’s just say I’m Albanian, mother and father Albanian came here to America. Couldn’t even talk English. Okay. Now born and raised in the Rhode Island, never been out of it and along came the war… I’ve never been out Rhode Island. Can you imagine going across America by train all the way across the Pacific above Australia, New Guinea from south all the way up the coast, all the way to the Philippines ending up and I saw Hiroshima, you won’t like it all. And then back home. I’m here because I was in the right place at the right time. And I was in the company of better people, way better than myself.”

As we do on every Memorial Day, we also remember Mike Spann, Roslyn Schulte, Jonathan Porto, Billie Taylor Presson, Christopher David Horton, the Cornell Class of 1944, and the other fallen, known and unknown.

Indeed – I am grateful my parents (“greatest generation”) and grandparents (immigrants around the time of WWI) are not around to witness the shambles of this once great nation.

May our honored dead of Tarawa, Normandy and Hue haunt their sleep.

They let it happen. They had the power to stop and they didnt. They thought the happy ride would last forever. They had won the wars abroad. Nothing to see closer to home. Bullshit!

Agreed. The “greatest generation” changed our immigration laws to the cluster we have now, and passed affirmative action. They screwed their own grandchildren, and all the rest of us.

One of my uncles was killed in action in WW2. Another was wounded. They surely didn’t fight for a BLM flag. These far-left nut jobs (this town council) should have no votes in running this nation, unless their families paid the cost of defending this country.

I visited a rural County historical museum, in a County with no history of Blacks. So, I couldn’t help but roll my eyes, when seeing 1/3 of the museum devoted to Black history. These far-left effeminate grovelers are everywhere. The historical exhibits showed black history in other areas of the country. This infatuation among these far-left scolds with everything Black is beyond weird. It’s psychotic. Maybe, we should provide free one-way tickets for them to Africa, where they can grovel before 1.3 billion Blacks. It would be like hog heaven, to these self haters.

Agreed
So went to DC for the First time 6 years ago and every exhibit every museum was all slave crap all day
By the 5th day I was sick of it
I’m pretty sure Obama had a lot to do with that
Hope Trump makes
Major changes in 2024.
By the way, saw President Trump and his escorts including ambulance going by Trump Tower. I was jumping up and down like a kid

It’s 24 hours per day * 7 days per week, on TV, schools, corporations, etc. You just can’t escape their groveling. Only white people seem to feel the need to grovel 24 hours per day 7 days a week, before these 3rd world stone-age rejects. They demand our children and everyone else grovel and feel guilty. They have no sense of pride or self respect. Even the Blacks, seem annoyed with it. But, these psychotic far-left scolds seem to get a high from groveling. I guess all the brave whites were killed off in wars, leaving us with only these effeminate mistakes.

By the way, the Black history museum is just God awful, didn’t go in but looks like an African hit, a real eye sore

the only “privelege” i’ve ever had in this life is being raised and taught by these men and their women and, of course, their parents

no matter the guise of their detractors, whether politicians, lame miscreants like antifa/blm, etc. or even foreign nations, nothing will ever diminish the honor of their efforts and sacrifice

My uncle served in the Navy during WWII and my father-in-law in the USAF. What impressed me most about both of them is, they went, did what had to be done, then returned home to raise a family. Good people – God fearing – and neither ever talked about the war that I heard. In fact, they were both the kind of men who you would never guess had been to war from their post-war lives and conduct. It was in my father-in-law’s honor I wrote a song, called “On the Mantel”. It’s here if you care to give it a listen. My wife and I used to sing it at the high school annual memorial day assembly.

Amazing appearance and remarks. I love hearing from vets and active servicemembers of all ages and from all eras. They always bring a unique perspective, dare I call it “wisdom,” to the table.

By the way, “Black Lives Matter” is a manifestly partisan, racist, subversive, hate-filled and anti-American domestic terrorist organization. These terrorists don’t represent anything American or unifying — to the contrary, the group represents the antithesis of American values and ideals.

To have “Black Lives Matter” flags flying anywhere, much less over veterans memorials, or, over U.S. foreign embassies (as was done by the U.S. State Department, under dotard Biden) is morally indefensible, appalling and contemptible.

All they can do is destroy…followed by putting an “out of order” sign on what has been ruined.
I’ll change my mind when they prove me wrong.
South Africa comes to mind.

“I was in the company of better people, way better than myself.”

Imagine some woke grievance studies undergrad saying something like this.

That is a common sentiment among WWII survivors. It only emphasizes the fact that these were just regular guys doing what was needed. They never thought of themselves as anything else, much less as heroes, but they were in awe of their comrades in arms whom they saw doing heroic things every day as a matter of course – even as their comrades saw them in turn. Definitely the Greatest Generation.

Thank you to all Rhode Islanders, Americans, and our Allies who gave their lives to secure and protect these United States.