Mariupol commander: “We will not lay down our weapons.” 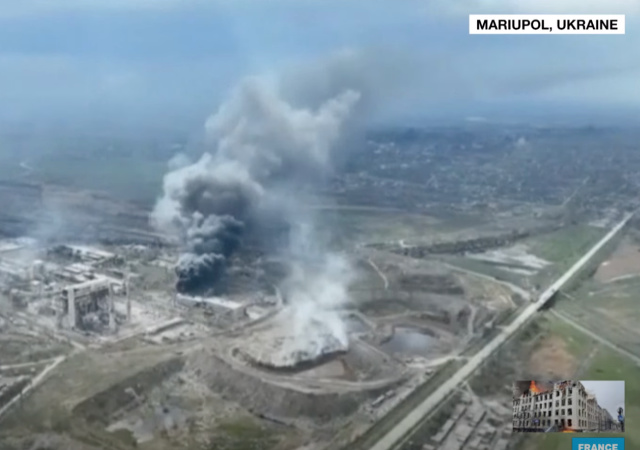 I love Wimbledon so much. I reported from it live two years in a row for Breitbart Sports. But the oldest and grandest tennis Grand Slam has taken the collective guilt route.

The Pentagon said that we have not given Ukraine any jets:

The US said on Wednesday that a previous announcement that it had supplied Ukraine with aircraft was inaccurate, as it had actually supplied the country with aircraft parts rather than whole jets.

Pentagon spokesman John Kirby retracted his statement from Tuesday that Ukraine had received fighter jets from an unnamed ally.

While fixed-wing aircraft have been offered by an unidentified country to bolster Kyiv’s defences, “they have not received whole aircraft from another nation,” Kirby told reporters.

“I was mistaken. They have not received whole aircraft from another nation,” Kirby said.

“That said, Ukrainians have received through United States coordination and provision enough spare parts and additional equipment such that they have been able to put in operation more fixed-wing aircraft in their fleet than they had even two to three weeks ago.”

Russia gave Ukraine of a new deadline to surrender Mariupol on Wednesday afternoon as Kremlin-backed troops continue to struggle to gain control of the strategic port city.

Moscow has failed to take any major cities in Ukraine and was forced to retreat from Kyiv, instead sending troops east to the Donbas.

Ukrainians remained defiant in the besieged city on Tuesday as a deadline for that day passed without surrender.

“We will not lay down our weapons,” Mariupol commander Major Serhiy Volyna told the Washington Post, adding they “may be facing our last days, if not hours.”

The collective guilt only punishes regular people. Vladimir Putin and Aleksandr Lukashenko do not care who gets punished and banned.

Statement regarding Russian and Belarusian individuals at The Championships 2022.

Russia invaded Ukraine in 2014. Russia annexed Crimea. Why now? This is stupid:

The decision would exclude a number of highly ranked players. Four Russian men are ranked in the top 30 on the ATP Tour, including No. 2 Daniil Medvedev, who is the reigning U.S. Open men’s singles champion, although he is currently recovering from a hernia operation. Russia has five women in the top 40 of the WTA Tour rankings, led by No. 15 Anastasia Pavlyuchenkova. Aryna Sabalenka of Belarus is ranked No. 4 and was a Wimbledon semifinalist last year. Her compatriot Victoria Azarenka, a former No. 1, is ranked No. 18.

After the war began in February, professional tennis organizers were quick to bar the Russians and their Belarusian allies from team events like the Davis Cup and Billie Jean King Cup, both of which were won by Russian teams in 2021. The sport’s seven governing bodies announced that ban collectively on March 1. And the men’s and women’s tour events in Moscow later this season were canceled, as well as a number of lower-tier events in Russia and Belarus. The International Tennis Federation also announced the suspension of the Russian Tennis Federation and Belarusian Tennis Federation from I.T.F. membership.

But Russian and Belarusian players have been permitted to continue competing on the professional tours as individuals albeit without any national identification. There are no longer flags or countries listed next to their names on scoreboards, in draws or in the published computer rankings.

Those Russian tennis players are definitely to blame

Not just the tennis players. Before invading Putin was very careful to consult not only with the Russian component of the International Tennis Federation (ITF), but also with the Russian members of FIFA, as well as FIA, The latter, if you’re not familiar with it, is the Fédération Internationale de l’Automobile, the governing body for international motorsports.

The latter gave the thumbs up despite the risk of FIA cancelling the Russian Grand Prix. Sure enough FIA did exactly that.

This is going to set back the booming Russian supercar manufacturing years if not decades. But for every loser there are winners. Ferrari, Mercedes Benz, Honda, er al, can breath a sigh of relief knowing that their Russian competitors won’t be breathing down the back of their necks.

By the way, Hitler convened a similar consultative meeting with German members of the 1930s equivalent of those very same international sporting bodies before invading Poland.

By all means punish those individual Tennis players. German and Russian athletes are the clearly the most evil people in the world, having been complicit in most of the greatest crimes against humanity in history.

Putin used Sochi as propaganda to show his people how great he was. He loved being on the podium handing out trophies for the camera. Look at the videos of him shaking hands with Sir Hamilton. To him it was worth the $30 mil hosting fee and the yearly $8 mil setup costs to be on the world TV feed for 2 minutes.

More of the west’s selective sanctimony.

Yes indeed. Banning athletes because their Nation’s leadership decided to invade another Nation based on a flimsy pretext. It’s not as if the US has ever done that./S

Biden sends US emergency oil reserves to the EU.
https://www.bloomberg.com/news/articles/2022-04-18/texas-port-sends-strategic-u-s-oil-to-europe-amid-supply-crunch

What’s in it for The Big Guy? Ah, yes… “Leading From Behind”… Leaving the American People Behind to preserve the WEF.

That’s the Easter Bunny pushing him.

That aint the Easter Bunny

Mariupol is Ukraine’s Alamo. These freedom fighters will go down in history like Davy Crockett and Jim Bowie.

No. At the Alamo the Mexican army blew “No Quarter”, announcing they would not be taking prisoners. Here the fighters have been offered safe passage for laying down arms and surrendering. At the Alamo the women and children were family members. Here, reports are that many civilians are hostages, and shot by Ukrainian forces if they try to surrender. You defame the honor of Davy Crockett, Jim Bowie, and all the brave defenders of the Alamo, and the honor and legacy of Texas. You beclown yourself, and obviously speak with a great, and grave, knowledge deficit. Go educate yourself.