“This is probably the most destructive single weapon on earth.” 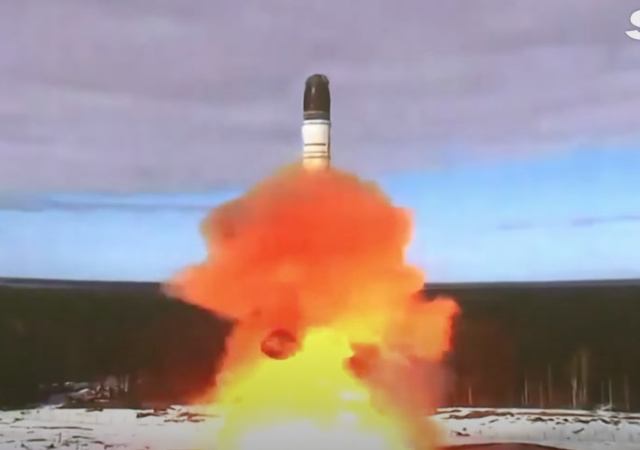 Inflation began before Russia launched its full-scale attack on Ukraine. But the invasion has not helped matters, especially with food. The World Bank acknowledged we could have a human catastrophe on our hands if the food prices continue to rise.

Biden also announced Ukraine will get $800 million in aid:

President Biden on Thursday announced another $800 million in military aid for Ukraine, including heavy artillery and ammunition, for Ukraine as the country continues to fight to defend itself against Russia’s multi-front war.

Biden, who spoke from the East Room, said the assistance would include heavily artillery weapons, dozens of howitzers, 144,000 rounds of ammunition for those howitzers, and tactical drones.

And he added: “To modernize Teddy Roosevelt’s famous advice, sometimes we will speak softly and carry a large Javelin, because we’re sending a lot of those in as well.”

The US will accept up to 100,000 Ukrainian refugees under a new programme that is set to be announced by Joe Biden on Thursday.

President Biden is expected to launch a programme that will begin next week that will allow Ukrainian refugees to stay in the US temporarily if they are sponsored by an American citizen.

The US will launch a programme next week that allows Ukrainian refugees to stay in the US temporarily if they have American sponsors, officials said on Thursday.

The “humanitarian parole” programme will offer qualifying Ukrainians the ability to stay in the US for up to two years, one official said on a call with reporters.

However, unlike the US refugee resettlement program, it does not provide a path to citizenship.

Any American citizen can apply to sponsor Ukrainians seeking refuge in the US but must show financial support and pass background checks, the Department of Homeland Security (DHS) said.

Russian President Vladimir Putin ordered troops to not storm the Azovstal steel plant, the last Ukrainian holdout in the besieged post city of Mariupol, on Thursday, opting instead for a blockade.

He claimed in a televised meeting that breaching the plant was “unnecessary,” claiming he was concerned about the welfare of Russian troops. He also urged Ukrainian fighter holdouts in the city to surrender, according to Reuters. Several deadlines imposed by Russia to surrender the city have passed.

Russian Defense Minister Sergei Shoigu said the rest of the city had been “liberated,” prompting Putin to declare “success” in the devastated city.

Leaving the plant in Ukrainian hands, however, robs the Russians of the ability to declare complete victory in Mariupol. The city’s capture has both strategic and symbolic importance.

Around 1,000 Ukrainian civilians and 500 wounded soldiers are sheltering inside the plant and on Thursday the country’s deputy prime minister demanded Russia open up humanitarian corridors for them.

Putin is laughing at everyone. The Kremlin said the missile, known officially as Sarmat, should make Russia’s enemies “think twice” before doing anything:

Putin said on Russian television that it was “capable of overcoming all modern means of anti-missile defence. It has no analogues in the world and won’t have for a long time to come”.

The Russian president added: “This truly unique weapon will strengthen the combat potential of our armed forces, reliably ensure Russia’s security from external threats and provide food for thought for those who, in the heat of frenzied aggressive rhetoric, try to threaten our country.”

He has previously claimed the missile would be able to hit a target anywhere on Earth. It can be fired over either pole, creating difficulties for ground and satellite-based tracking systems.

In a statement, Russia’s defence ministry said: “Sarmat is the most powerful missile with the longest range of destruction of targets in the world, which will significantly increase the combat power of our country’s strategic nuclear forces.”

The missile reportedly has a range of 18,000km (11,000 miles) and can deliver between 10 and 15 nuclear warheads at hypersonic speeds.

“This is probably the most destructive single weapon on earth,” Ian Williams, a fellow at the Centre for Strategic and International Studies think tank, told The Telegraph. He said it “could destroy 10 cities with one missile” as the warheads it carries can be “independently targeted”.

Image via The Telegraph. 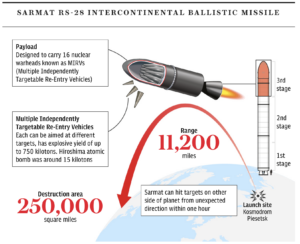 The US Treasury said the Russian commercial bank Transkapitalbank has been sanctioned, as well as a global network of more than 40 people and entities led by the Russian oligarch Konstantin Malofeyev and the holding company of Bitcoin miner BitRiver.

Treasury under secretary for terrorism and financial intelligence, Brian Nelson, said in a statement: “Treasury can and will target those who evade, attempt to evade, or aid the evasion of US sanctions against Russia, as they are helping support Putin’s brutal war of choice.

“The United States will work to ensure that the sanctions we have imposed, in close coordination with our international partners, degrade the Kremlin’s ability to project power and fund its invasion”.

At 10 years old, Vanda Obiedkova survived the German occupation of Mariupol. Vanda was 91 when #Russian army invaded her city. 81 years after Nazi regime, she died. Dying in a basement, freezing, pleading for water, Holocaust survivor asked: “Why is this happening?”#SaveMariupol pic.twitter.com/yO9Gn18bJZ

Ukraine and Russia are top suppliers of wheat, maize, and barley:

The world is facing a “human catastrophe” from a food crisis arising from Russia’s invasion of Ukraine, World Bank President David Malpass told the BBC.

Malpass warned that record rises in food prices were pushing hundreds of millions of people into poverty.

“It’s a human catastrophe, meaning nutrition goes down. But then it also becomes a political challenge for governments who can’t do anything about it – they didn’t cause it and they see the prices going up,“ he said in an interview with BBC economics editor Faisal Islam.

The World Bank calculates there could be a “huge” 37% increase in food prices, which is “magnified for poor”.

“It’s affecting food of all different kinds – oils, grains – and then it gets into other crops, corn crops, because they go up when wheat goes up,” he says.

The focus needed to be on increasing supplies across the world of fertilisers and of food, alongside targeted assistance for the very poorest.

Is Russia systematically burning the grain fields of Ukraine?

It seems to me that the western response to the invasion has caused the food shortage far more than the invasion itself. Kinda like how it was our response to covid that crippled us, not covid itself.

We can’t wait until Russia has these fully operational. Time to do what should have been done 70 years ago- All out Bolt from the Blue- Preemptive Nuclear Strike.

I vote against pre emotive nuclear strike.
Have you forgotten that Russia has nuclear missiles with mirv warheads on submarines?
They will retaliate after our unprovoked nuclear attack.

I’m not saying we wouldn’t get out hair mussed, but we would win.

We are outgunned but are strutting around on the stage in accordance with the way things were 50 years ago.

Leftist enemies of America are now within and in control of our government, within our intelligence services and within the Pentagon as the shameful withdrawal from Afghanistan revealed. I’m afraid that many Americans are woke and smugly asleep.

Not even a blinding flash of nuclear light will awaken the woke.

We can’t fight Russia without commitment from multiple Nuclear Allies.

At least not without casualties that the mainstream US pop is willing to accept.

The key to beating these countries is allies that will all retaliate together (in other words, you have to have the threat of a serious counterpart in a world war to try and prevent a world war from occurring)

Russia has far surpassed the US in nuclear capability: “The Russian RS-28, also known as the Satan II, has been in development since 2014, and has been described as ‘capable of wiping out parts of the earth the size of Texas.’ It has a range of 6,385 miles and carries a warhead jam-packed with Multiple Independent Reentry Vehicles (MIRV) that has a combined destructive yield of 50 megatons. In other words, the RS-28 carries a destructive yield greater than 35 times that of the US Minuteman III.”

Bet pResident Potatohead and his string-pullers are tickled pink.

Man, it’s a good thing we started our inclusive woke military….perfect timing to be focused on those things.

Something tells me that the Pentagon is not exactly concerned about this latest Russian propaganda effort.

Of course not. They know Russia isn’t their enemy and have no intention of fighting them. The only people our rulers will ever see as a real enemy are people like us who love the founding ideals of our nation.

Congress should approve the additional amount in aid to Ukraine with an equal amount to finance the completion of the southern border wall and additional funding for the Border agency patrol!

Iran must be confused as hell right about now.

“He said it “could destroy 10 cities with one missile” as the warheads it carries can be “independently targeted.”

So then: DC, Baltimore, Philly, Trenton, NYC, Boston, Hartford, and maybe a stretch to Atlanta… with two left over for mulligans.

This is the same Putin that thought he’d have Ukraine nailed down in a few days.

That said, I’m not confident our military can respond even to Putin’s clusterfrack keystone cops. They’re way too worried about being woke than about winning wars.

I find it amusing that just a few short weeks ago, Biden gave his blessing to Putin to invade Ukraine. He practically begged Putin to invade.
And nobody remembers back that far.
This could have been so easily avoided.
And, here we are.