“Critical Race Theory has no place in our South Dakota public education.” 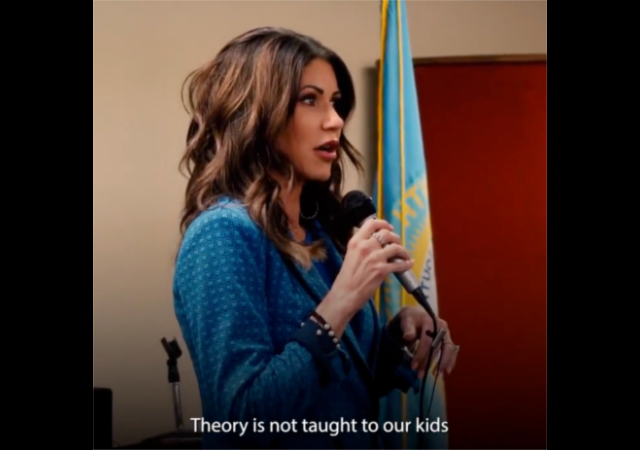 The legislature passed the bill that bans Critical Race Theory in universities.

Enjoyed visiting Mobridge this morning to discuss pertinent issues with South Dakotans and how I can continue our work in making our state one of the best states in America to live. pic.twitter.com/pWAhIxsaRs

Critical Race Theory has no place in our South Dakota public education.

That’s why yesterday I announced I will be signing an executive order to ban the teachings in our K-12 schools. pic.twitter.com/nPYye6E4oT

In March, Noem signed HB 1012 into law banning Critical Race Theory in universities and colleges under the South Dakota Board of Education.

The state Senate defeated the K-12 portion of the bill with criticism coming from Republicans and Democrats:

“No one is more opposed to critical race theory [than me],” said Sen. Jim Bolin, R-Canton. “[But] we should not be putting requirements both for Board of Regents, the Board of Technical Education and our K-12 system [into the same bill].”

Ultimately, the amendment failed on a close 18-15 vote. It was a different story for the standalone bill, however.

Democrats and a few moderate Republicans did attempt to dissuade colleagues from adopting a measure they painted as extreme. Sen. Reynold Nesiba, D-Sioux Falls, characterized the measure as akin to what “they do in Russia.”

“So a professor has free speech in his or her classroom,” said Nesiba, noting the measure excludes “content or conduct” of a classroom from its strictures. “But if you walk across campus and happen to be doing an orientation, you lose that free speech?”

Sen. David Wheeler, R-Huron, also cautioned against codifying a list of “divisive concepts” in state law, as a potential abuse of power.

“It’s a bad power that we should not be in the habit of using,” Wheeler warned.

If she wants to make a real long term difference her state legislature is waiting.

Noem seems to have this habit of leading from the rear… and even then occasionally misreading the flow of traffic.

She read it correctly here, CRT and other social issues are the important issues of our time.

After fumbling the ball badly with the men-in-women’s-sports issue last year.

I agree, but in this case she finally learned to read. We should hope she remains literate at this because a governor is a very powerful and important person.

Overall, South Dokata has many tings going for it. I am considering retiring to South Dokata and setting my disabled, now adult chid there.

CRT is straight up Marxism. Read Race Marxism by James Lindsay, he goes through where it came from and their no end in sight but a Race dictatorship

She wants to be put on the ticket so bad

As we’ve learned, either you’re all in or you’re unreliable.

Compare this to the Florida bill, which actually tries to get CRT out of the classroom.

As always, Noem is a pale imitation of DeSantis, a day late and a dollar short, passing weak bills that check the box while defending “academic freedom” … the freedom to force every teacher to indoctrinate kids in racist Marxist teachings.

RINOs keep hoping these battles will go away and things will return to “normal”.

They won’t. Fight or retire.

She’s squarely in the GOPe column and will not get my vote in the 2024 primary. Keep her in SD if you like her.

Agreed. She’s proven she isn’t worth a vote on the national level. Keep her at the state level where her stupidity is limited to SD. Poor SD, though. I suppose they can do much worse.

Sure, all of your criticisms are valid but she’s still the only Governor I’ve ever wanted to kiss.

And not Gov. Palin??

Even after all her sh_t? Would you want to still kiss a stripper or a prostitute if you found her attractive? Low standards I suppose.

When it comes down to it, the existence of public school, itself, is the key to the problem. Too much government in the wrong place. It is not a popular opinion, but public school really needs to be done away with. It is far more harmful to society than helpful, and even if one fixes it, somewhat, now … it will always devolve back into this same destructive state, because it is too much government involvement and control (total control) in the wrong place.

This seems like too much work. Why not just allow taxpayers to use their money to send their kids to their school of choice?