It’s for the common good, you guys. Because, you know, prohibition has such a winning record in history. 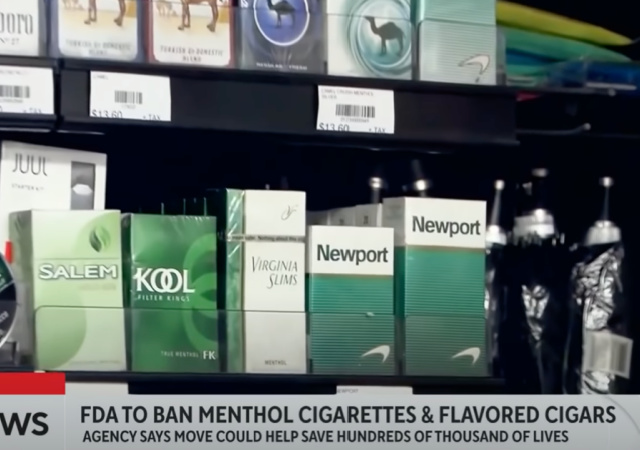 President Joe Biden’s administration wants to ban menthol cigarettes. It likely won’t happen until 2024, but the FDA took another step forward when it published the rules.

We’re not stupid. We all know this is a movement toward banning tobacco. You know that’s what Big Brother wants to do.

It’s for the common good, you guys. The government wants to help you:

The policy could save hundreds of thousands of lives, FDA Commissioner Robert Califf said Thursday. He said in his career as an intensive-care cardiologist, he had seen many people die of smoking-related diseases.

“We know the majority of smokers want to quit,” Dr. Califf said on a call with reporters. Prohibiting menthol in cigarettes, he said, will give them “a better shot.”

The Wall Street Journal buried an important detail: “In the U.S., 81% of Black smokers and 51% of Hispanic smokers used menthols in 2020, compared with 30% of white smokers, according to the National Survey on Drug Use and Health.”

Big Brother: We’re going to help you guys by banning something you enjoy.

They’ll likely go to regular cigarettes. They’re addicted to the nicotine, not the menthol.

If you don’t know by now that smoking is bad for you and could give you lung cancer, then…I have no words for you.

I’ve been smoke-free for over 16 months! I have friends who still smoke. They know the risks, and it’s their choice.

The move to ban menthol cigarettes all started in…you guessed it! 2009 with President Barack Obama in the White House. But, as you will see, President Donald Trump’s administration was no better. His FDA commissioner wanted to go through with it, and Trump supported him.

But Trump’s administration put away the idea when the commissioner left in 2017.

Obama gave the FDA regulatory authority over the tobacco industry in 2009 when he signed the Family Smoking Prevention and Tobacco Control Act:

The law banned candy, fruit and spice flavorings in cigarettes because of their potential appeal to children, but left unsettled the question of menthol. The law stipulated that the FDA could prohibit menthol cigarettes only if it could demonstrate that a ban was a net benefit to public health and took into account unintended consequences such as an illicit market.

The agency concluded in 2013 that menthols were harder to quit and likely posed a greater health risk than regular cigarettes. But the Obama administration didn’t move the policy forward after that. In 2017, Scott Gottlieb, then commissioner of the FDA, sought and obtained support from the Trump administration to advance the menthol-cigarette ban as part of a broader regulatory plan for the tobacco industry. When he left the agency in 2019, Trump administration officials shelved the plan, according to people familiar with the matter.

When big brother goes crazy, it almost always wants to make me do what they’re trying to ban. I feel better being smoke-free, though.

Big government and sports make me petty. Go away.

Repeat after me: PROHIBITION NEVER WORKS. The war on drugs is one of the worst policies and a waste of money we’ve ever had.

I wonder if this would make the government change its mind. They might lose a ton of tax money with the ban. *gasp*

Definitely not Kool. What’s next, Colt 45 malt liquor? This smacks of institutional racism.

Don’t tell the Queen, she drinks fortified wine (Dubonnet) each morning at 11am. It is mixed with vodka, I think.

That’s different. Doo Bonnet has a classy name and likely is not sold in skid row stores.

As for the menthol cigarettes, I can see the major brands going away. But, somewhere in that bill will be an exemption for custom tobacconists like Dunnhills and some of the others. After all, laws don’t apply to the people that can afford such places.

“As for the menthol cigarettes, I can see the major brands going away.”

I am a nonsmoker and don’t understand the habit but I do have a theory about this decision and it MIGHT NOT be as nefarious as many suspect.

A problem arose when Indonesia, the main source of these clove cigarettes for the US complained about this new rule to the WTO. They claimed it violated the Technical Barriers to Trade (TBT) agreement because of the violation of the National Treatment provisions. Specifically, Indonesian cigarettes were being given different treatment than “like products” produced in the US market (ie menthol flavoured cigarettes) and so this was discriminatory treatment which violated the TBT.

Ever since this case was decided I have been waiting to see if the US would ban menthol flavoured cigarettes. So I was not surprised by this news.

So, little though I want to give the Biden administration any benefit of the doubt, it seems possible that this step is simply an effort to reduce smoking by young people and to do so while complying with the decision of the WTO Appellate Body in the Indonesia v US (Clove Cigarettes) case.

Sorry, but no one starts with clove cigarettes and then moves on to regular ones. Well, no normal people, anyway. Kids who start smoking start with real cigarettes.

The government pulled this same asinine crap with candy cigarettes. It was ridiculous and stupid. But, that’s how government works. I remember reading an interview with a sheriff who was lecturing people on how LSD was put on blotter paper with cartoon characters in order to attract children. It was beyond laughable … except for the sad fact that people who made policy actually believed shit like this. The government is making the same bullshit case against menthol … about how it makes cigarettes smoother and more “addictive” (nicotine is habituating, not addictive), which only showed that the morons who thought that stuff up never actually smoked any menthol cigarettes.

The menthol ban is a classic, though … it’s pretty much only blacks who smoke menthol cigarettes and the dems can’t win anything without blacks. Pretty funny.

Did anybody in the Biden Braintrust examine the demographics of menthol cigarettes?

…while they are handing out crack pipe and needles for drug use in “safe Injection Sites.”

We all know this is a movement toward banning tobacco.
Not a CHANCE! They won’t kill the goose that lays the golden egg. Taxes on tobacco are YUGE! They would never give those up!

Of course they would. Because they are incapable of thinking two moves ahead.

Over the past 20 years, how many examples can you think of where blue cities and states imposed or raised some sin tax, burbling about how important the new income stream was going to be to assist hospitalized minority bisexual babies with tardive dyskinesia, only to see both their new AND old revenue streams tank when the “sinners” either dropped the habit or found some workaround way of indulging in it? I seem to remember at least two in the PNW alone.

Cigarettes are easy to black market where they are MUCH cheaper. There was a lot of black market toilet paper here in Pasadena during the original shutdown.

Tell your black friends that Biden is taking away Kools and Newports because he doesn’t think blacks can make good choices, and that the Democratic party is worried about the health of their slaves.
Have fun with it!

He also thinks they’re too stupid to get a free govt id.

I enjoy flavored cigars. I don’t see what the problem is

You’re the token white Biden needed to be the beard for his racist regulation.

“I don’t see what the problem is”

Well, I don’t see what the problem is will drilling our own oil, or enforcing our borders, or treating all races equally. But Biden sees a problem with all those things.

Pretty soon they’ll have to sell Halls cough drops from behind glass when those dastardly freedom-lovers start crushing them to roll their own menthols.

The price of Vick’s nasal inhalers went through the roof.

That, or crushed urinal cakes.

You don’t have to buy those. you can pick them up in the mall restoom on the way to smash and grab—two birds with one stone.

Hopefully not the ones with pictures of Jane Fonda on them…..

Paternalism and it will not play well with voters.

Indian reservations sell tons of cigarettes. Probably be rolling them
In Menthol now.
I have a nephew in Wisconsin that buys them cause no taxes

I think federal law and regulations apply on reservations. If not that then manufacturers will not be able to ship menthol cigarettes across US territory.

Well, that’s about typical for a racist like the pedophile-in-chief, isn’t it?

It could be that they do not care about micturating in the Wheaties of their supposedly captive voters because they believe that they have mastered the art of creating and delivering sufficient artificial “votes” to “win” as needed anywhere in the country.

“Micturating”. Hey, it’s Sunday. Do I really have to look up words on Sunday?

I don’t smoke. My parents smoked like chimneys when I grew up. That said, menthol cigarettes aren’t more dangerous than regular cigarettes. If menthols are so bad, ban all of them.
People don’t need big nanny government to tell them what they cannot do. If you want to ban cigarettes, you have to look at alcohol. Letting people be adults means they can make poor choices.
What’s Biden going to mandate next? Prevagen for memory loss? Maybe not a bad idea.

Why should any unelected bureaucrat get to ban anything?

crap I deal with here in janet mills playground. shes the older version of harris.

If Fanny Farmer candies are still around, their assorted chocolates should be banned. Trying to figure out which ones were grape jelly-filled was like walking through a minefield. How many family Christmas dinners were ruined when the box went around at the dinner table and you picked the wrong chocolate? There oughta be a law.