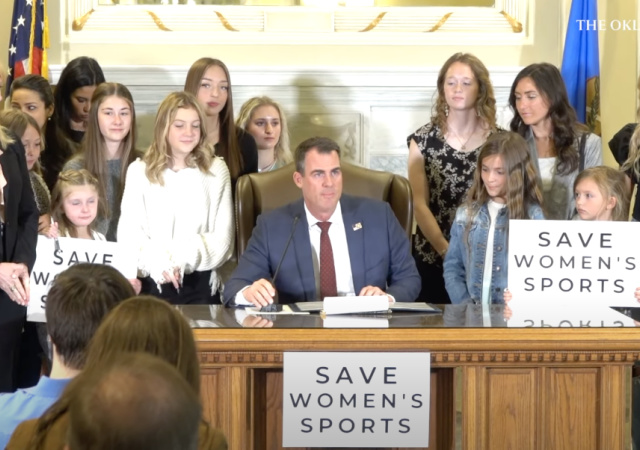 Oklahoma is the fourth state to enact a law banning biological males from female sports. This bill applies to high school and college

Stitt said, “This bill, the Save Women’s Sports Act, to us in Oklahoma is just common sense.”

Levi Gladd, a distance runner on the University of Oklahoma’s track and field team, agreed with Stitt.

“I’m behind this because I believe that all young women deserve the opportunity to excel at whatever sport they choose to be passionate about,” Gladd said. “I don’t think it should be taken away from them, especially for biological reasons they can’t overcome.”

OU released a statement saying they will “continue to embrace diversity and inclusion and is committed to creating an environment of belonging where those who play for us, work for us and support us are welcomed as their true, authentic selves.”

Oklahoma State University athletics spokespeople said they were aware of the bill.

The Oklahoma Secondary Schools Activity Association never received a complaint about transgender females in sports, but will comply with the law.

“The only emergency here is that transgender, two spirit and gender non-conforming kids in Oklahoma are trying their hardest to survive in conditions that are so unwelcoming they are not sure they can live through another day of it,” Freedom Oklahoma executive director Nicole McAfee said.

The ACLU of Oklahoma said it is exploring legal recourse.

It has come to the point where you have to pass a law to force schools to follow what is otherwise just common sense.

No, this is about sports. Women’s sports. And the attempts by lunatics like you to erase biological women from women’s athletics. So just quit with attempting to establish a victim narrative here. The only victims of this obscenity are the biological women who must now accept second class athlete status all for the benefit of mentally ill men who think they are women. Disgusting. Simply disgusting.

With increasing velocity the last couple years, medicine has wondered into absurdity. Right now, the stakes are reasonably low; Girls being pushed off the podiums by boys competing on girl teams. This is all enabled, as you point out, by a collection of moronic doctors deciding that mental delusion needs to be indulged as ‘treatment.’

But, what happens when these same doctors decide they’re going to adjust other traditional social norms – and government regulations and civil RIGHTS – in other ways? It won’t be too long until they come up with Self-Defense Psychosis; simply wanting a firearm to defend yourself and your family is a indicator of troubling mental health issues and disqualifying for gun ownership. I think we’re naive and a bit silly to not believe that’s a possibility, probably sooner rather than later.

Biden is apparently going to amend the CFR and use Title IX to preempt these state laws. That will surely be challenged in court and then we’ll see how conservative Gorsuch, ACB and Kavanaugh really are. I’m not hopeful.

There is a very real possibility this bill will be declared unconstitutional as written based on the overall wording.

Some ACLU lawyer is going to run with that.

In many sports, females can compete with males today particularly if the school doesn’t offer a feminized version of the sport. If a girl wanted to try out for the boys soccer team, in many states (maybe all states, I’m not sure), she likely could and absolutely could if there wasn’t a girl’s soccer team available.

That’s true and I personally agree with it in truth and sentiment but in the eyes of the law what they may “need” or what I personally think isn’t a subject for discussion. ( or common sense, right v. wrong, good v. evil or any other way to look at it)

They just passed a law that “in plain language” establishes a “protected class” without equal protection of the “other” class.

Some lawyer is going to take that eventually to SCOTUS if the state Supreme Court doesn’t take it out first.

IANAL, but I see your point.

I learned a long time ago that your case is only as strong as the adverse side’s ability to shoot a hole in it.

This one ( the way its worded in plain language) has a BIG hole built into it.

It makes me wonder if it wasn’t deliberate.

The “other” class has ever opportunity to participate in sports activities as their actual gender.

Irrelevant as to their opportunity ( or even choice)

Pay attention to the following and take special note to the emphasized.

No state shall MAKE or ENFORCE any LAW which shall abridge the privileges or immunities of citizens of the United States; nor shall any state deprive any person of life, liberty, or property, without due process of law; nor deny to ANY PERSON within its jurisdiction the EQUAL PROTECTION of the laws.

1. Title 9 has allowed that since it was put into law, if there is no female team females could participate in male sports.

2. The difference between men and women is one that Oklahoma state law recognizes as does federal law so no even without title 9 this wouldn’t be overturned because men and boys don’t need protection from women and girls.

As always Danny, you are totally wrong and devoid of any legitimate subject matter knowledge.

The law in question doesn’t exempt or specify any title considerations or special cases- its a statement in “absolute’ outright universal ban without equal consideration so your item 1 doesn’t apply.

Your #2 is simply non sequitur and totally stupid on the merits with no value or meaning whatsoever.

Go back to Politico and tell them you took another spanking.

1. There is no non-sequiter in the post you are attacking but being both idiot asshole and cultist you are getting one now

2. You are an idiot who responded to something I did not say you fucking moron. I said Title 9 permits girls to compete on male teams in some circumstances and it is true

3. You did not even try to debunk point 2 because you know I am right and you are just an asshole

No again Danny and all of your incessant whining and denials do not change what’s written above- it just makes you look even more idiotic when you deny the obvious and plainly written. I know none of that matters to you or your Politico puppeteers and I doubt you even comprehend the obvious lack of intelligence your posts show but that’s OK.

I still own and control you and influence all the emotional stimuli to prompt you to react as I see fit so lets do it again my little minion drone.

First, I have not attacked any post. I stated clearly and concisely and your point 2 is completely non sequitur ( check your spelling too) relative to the subject and context. ( although I legitimately doubt you understand what that is or how it applies)

Danny, “correcting” you (as I have done) IS “debunking. Get your Politico handlers to explain that to you

There are no ‘biological’ males. There’s just males and females. ‘Biological’ is redundant.

Those pretending otherwise are either mentally ill or perpetrating a fraud, a crime. Choose wisely, and the law needs to act accordingly in response.

Agreed and there is no such thing as trans-gendering either. ( or turning lead to gold, wood to ivory, chicken sh!t into chicken salad etc.)

Reminds me of Sir Mix-a-lot “silicone parts are made for toys”.

Oh so you no longer feel men and boys need to be protected from women and girls, and no longer feel Oklahoma’s laws recognizing the difference between the sexes is unconstitutional? Great.

No try not to return to being a squish

You must be in training for the Kamala Award for the most word salad non answers on Earth.

There are those born transvestigial (having both male and female genitalia). It’s an unfortunate birth defect.

The exception, and a band in the transgender spectrum disorder, which can be reasonably tolerated, but with no redeeming value to society or humanity, there is no cause for anthropogenic normalization a la modern family… model. That said, if they can normalize the wicked solution, the progressive path and grade is wide yet stunted, indeed.

In the conventional, traditional equal and complementary standard model, there is a belief to normalize a favorable juxtaposition of the sexes based on equity and physiological contrasts.

With that said, then create a Competitive and Non-Competitive classifications and establish divisions where the competition is equal among like kind. They want inclusive sports programs, give them their own division and title it. Leave the current division status of competitive and non-competitive sports alone.

Just what we need – another way for bureaucrats to waste our taxes.

Maybe, but it would also be the best way to take away their argument. Give them what they want and be entertained by their howls of protest. Should be fun.
.