Children died because inspector who could have identified fire hazards was reassigned to a restaurant to enforce covid-control rules. 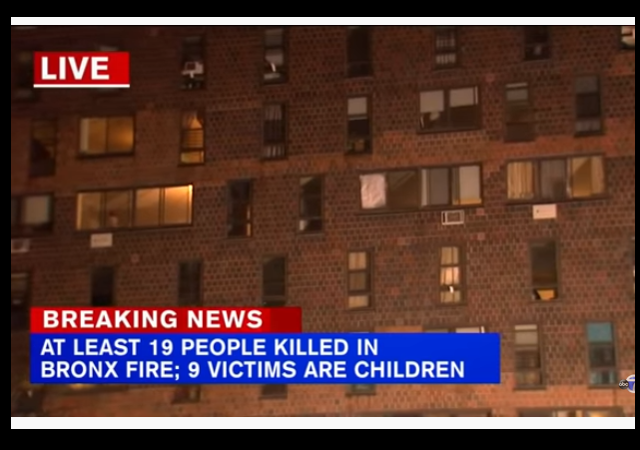 In late December, New York City experienced its deadliest fire in 30 years when a malfunctioning space heater caused a blaze that filled a high-rise Bronx apartment building with thick smoke and killed 17 people.

An investigation into the event shows that the apartment complex was scheduled to be examined by a New York City Fire Inspector several months beforehand. However, the critical check that could have identified fire hazards was canceled.

Why? The inspector was reassigned to conduct COVID restaurant inspections.

The troubling account came from Oren Barzilay, president of the union that represents paramedics and fire inspectors who testified Wednesday at a hearing held by the City Council’s Fire and Emergency Management Committee.

“It’s terrible,” he told the Daily News after his testimony. “I’m not blaming Eric Adams. I’m blaming the previous administration for not thinking it through.”

During testimony to the Council on Wednesday, Michael Reardon, the FDNY’s deputy chief inspector, noted that during the course of that initiative, about 90 fire inspectors were diverted from their normal responsibilities to perform COVID-related duties, like inspecting restaurants to make sure they checked vaccination cards and were distributing masks. Overall, there are 450 fire inspectors citywide.

“They were downsized to the point that some units were unable to do all the inspections they needed to do,” he testified.

“We’re looking forward to making sure these wrongs are righted,” she said. “It should be investigated.”

NYC Mayor Eric Adams has since rolled back the restaurant policing by the FDNY inspectors.

We are now at the 2-year mark of “2-weeks to flatten the curve”. I assert that the response to the coronavirus has likely killed more people than would have occurred without the lockdowns, social distancing, and forced vaccination programs.

Whatever that increased death toll is, the 17 people who died in that fire (many children) should be included in the number. Children may have been burned to death because the inspector who could have identified significant fire hazards was somewhere else, enforcing covid-control rules that ultimately proved ineffective.

Yes, that MIGHT have been prevented, but FOR SURE there were several people who DIDN’T WANT TO WEAR A MASK that were set straight!!

NYC used to be called the “Big Apple” – have no idea why – never seen any apple trees or anything that would make ME think of an apple.

NOW, NYC should be referred to as the “BIG A HOLE”! It’s only a matter of nicer weather before the streets of NYC are the same as SF or LA! It’s too cold out there to drop your pants and take a crap in Times Square! But SPRING is just around the corner!!!

RFK Jr.’s book explains it all. Our kleptocracy puts the Russians to shame. Mind boggling that medical doctors and civil libertarians all fell into line for the money whores.

Although I agree with your point. The chances of the inspection finding something wrong and having the apartment correct the discrepancy are something that can ever be known.
The horse got out of the barn long ago, too late to close the gate.

While the chances of inspecting that individual heater are low, it’s possible that the inspector would have spotted a few opportunities that, while not preventing a fire, might have sufficiently slowed its spread to allow people to escape.

No: the fire inspector would not have seen the heater because it was in an apartment.
The linked article makes clear that the missed defect was fire doors that did not automatically close completely: The hydraulic closers needed to be either adjusted or replaced.

Plausible, perhaps probable attribution of risk and mitigation. All they need to do is identify the cause of the failure, correlate with inspection protocol, and reach a conclusion.

As we begin to gather more information and develop a more complete picture of the costs of the tradeoffs made by govt in their single minded focus on Covid the wider public’s appetite for a repetition of Covid hysteria policies is going to diminish. This was a classic example of how the pursuit of optimisation fails. The govt at every level turned over the reins of power to a subset of the public health community with a myopic view of Covid to the detriment of every other factor.

If they aren’t up in arms over crime, this is nothing.

Driving home the other night I narrowly missed getting hit by a guided missile (drugged out homeless behind the wheel of a car built by junk yard Johnny Cash). Crimes that used to be once a month or a few times a year in our town (armed robbery, kidnapping) are now occurring 2-3 times a week.

“Children may have been burned to death because the inspector who could have identified significant fire hazards was somewhere else, enforcing covid-control rules that ultimately proved ineffective.”

COVID… which, as you may recall. doesn’t kill children.

The only answer: defund the fire inspectors!