The Science™ that killed COVID19 was political science. 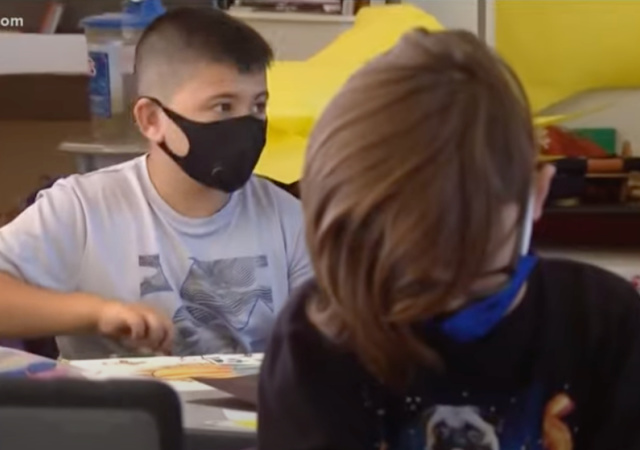 It was just a few, short weeks ago I reported on the outcry related to pandemic policy hypocrisy when California politicians attended the Super Bowl and went unmasked for large portions of the game. These actions were taken despite Los Angeles County’s very strict masking policy.

Of course, school children were forced to still don face masks despite indoor masking rules being dropped for vaccinated people through the state.

Clearly, the preference cascade toward ditching the mask continues in the deep blue states. California is slated to end mask mandate for school children by mid-March. And, as an additional bonus, unvaccinated individuals can now be mask-free indoors.

Indoor masking will no longer be mandatory at California schools and child-care facilities after March 11, a long-debated and much-anticipated move that comes as the state continues its steady emergence from the Omicron wave of COVID-19.

Though Monday’s announcement is just the latest move to loosen California’s formerly strict face-covering policies, it may wind up being the most significant in the near term — allowing potentially millions of K-12 schoolchildren to go maskless in the classroom for the first time in at least 10 months.

In another major move, California officials also said masks will be strongly recommended — but no longer required — for unvaccinated individuals in most indoor settings starting Tuesday.

“Today is an important day for California, one that is driven by the data and the science,” said Dr. Mark Ghaly, California’s health and human services secretary.

But California isn’t the only Blue State ditching the school mask mandate. Oregon and Washington state are doing so as well.

Oregon is ending its requirements on March 12, weeks earlier than initially slated and nearly full two years after “two weeks to flatten the curve”.

Oregon Governor Kate Brown and the Oregon Health Authority have once again updated their masking guidance as COVID-19 cases, rates and hospitalizations continue to decline.

The OHA announced Monday that the rule requiring masks in indoor public places and schools will be lifted after 11:59 p.m. on March 11. The governor’s office said other state and federal requirements, such as those for health care settings, public transit, and other specialized settings, will remain in place for a period of time.

Made in conjunction with the governors of Oregon and California, Monday’s announcement comes as the number of cases and hospitalizations due to the new coronavirus in Washington continues to decline.

As the virus’s omicron variant wanes, conversations are sparking everywhere — from classrooms and homes, to retail shops and executive suites — about when and how to return to a pre-pandemic modes of life.

Impact Research, a Columbia, Maryland, political science laboratory, sent a memo to Democrats: “After two years that necessitated lockdowns, travel bans, school closures, mask mandates, and nearly a million deaths, nearly every American finally has the tools to protect themselves from this virus. It’s time for Democrats to take credit for ending the COVID crisis phase of the COVID war, point to important victories like vaccine distribution and providing economic stability to Americans, and fully enter the rebuilding phase that comes after any war.”

I suspect that the Democrats’ pandemic extravaganza of power-grabs is not going to be forgotten by voters anytime soon…and maybe not even the young voters-to-be.

Here in Pasadena, our officials have decided to ditch all mandates, including for us non-vacinnated.

LA County is still going to isolate the non-vaccinated and those who can’t present paperwork to prove they are vaccinated. And the teachers unions are going to refuse to obey the new masking rules. So we finally get to the nub of the problem: government employee unions. Let’s see what happens after next November. It is unlikely but a possibility that the days of teachers unions are numbered.

Well, that’s mighty white of them to drop the mandates that did absolutely nothing to protect public health.

Took the Stasi no time to implement them.

It can’t be a coincidence that the entire Left Coast takes this action just before the SOTU can it? Look for Presidementia to cite this news as proof of victory over COVID. Like others, though, I question the need for any delay.

Too soon to drop mask requirements. Preliminary studies have shown that hot air leaving your mouth may contribute to global warming. Anthony Fauci says that wearing a mask mitigates this and as a result could slow global warming by one tenth of one degree over several thousand years.

Let’s keep in mind that no one, not Brandon, not any governor, is giving up their emergency powers. Masks will be back right after the November elections.

LAUSD made a deal with the city before the school year started that kids would be masked all year. They are the biggest power around here and will certainly get their way, unless shamed to change.

Captain Kirk asked Dr. McCoy when the Pandemic would finally be over. McCoy replied – “Damn it, Jim. I’m a Doctor not a politician!”

Captain Kirk told Dr McCoy that Scottie had a solution.

What works: D supplementation during “flu” season, self-quarantine by sick people, early outpatient treatment comprising zinc plus a zinc ionophore for 5 days. We’ve known this for quite a while.

Also, the MMR vaccine works as well as the Pfizer vaccine did in its first real-life clinical trial.

Our children are already vaccinated against COVID-19.

Study of children in India, MMR vaccine effectiveness was 87%, and the safety record for the MMR vaccine in the US is less than 1 severe adverse event per million. This data strongly suggests that children in the United States are insulators against COVID-19, neither catching it much nor passing it to adults, because they’ve already been vaccinated against it.

With midterms looming, Obama has signaled and all of the kooks are falling in line.