The whole speech was incoherent and filled with gaffes. A spokesman said troops will not go to Ukraine. 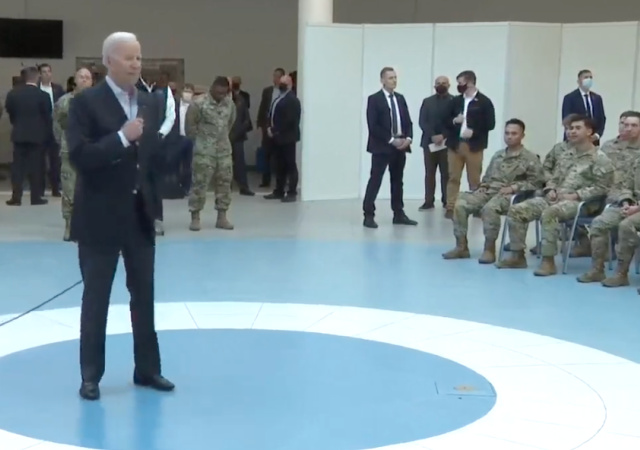 Can we bring back Trump? As much as his rambling got on my nerves he was at least coherent.

Biden gave a speech to the 82nd Airborne Division in Poland that would make my 9th-grade oral communications teacher faint. Filled with gaffes, pauses, and unnecessary information.

The worst gaffe is when he told the soldiers they will go to Ukraine. At least, I hope it’s a gaffe. Who knows what they’re actually planning to do:

A Biden spokesman told The New York Post, “The President has been clear we are not sending US troops to Ukraine and there is no change in that position.”

Biden tells the 82nd Airborne they're going to Ukraine:

Her name was Madeleine Albright:

And, you know, the woman who just died — the Secretary of State — used to have an expression. She said, “We are the essential nation.” It sounds like a bit of a hyperbole, but the truth of the matter is you are the organizing principle around which the rest of the world is — the free world is moving.

So what’s at stake — not just in what we’re doing here in Ukraine to try to help the Ukrainian people and keep the massacre from continuing — but beyond that, what’s at stake is: What’s — what’s — what are your kids and grandkids going to look like in terms of their — their freedom? What’s happening? The last 10 years, there have been fewer democracies that have been formed than we’ve lost in the world.

Biden, while in Poland: “What we're doing here in Ukraine…” pic.twitter.com/hmpru9O8lJ

“The worst gaffe is when he told the soldiers they will go to Ukraine…
A Biden spokesman told The New York Post, “The President has been clear we are not sending US troops to Ukraine…”

This. Right here.
The Leader of the Free World something, clear as day.
Some coat-holder then clarifies that he meant exactly the opposite.
President Puddinghead.
America’s Potemkin President.

Biden’s Plan is to force Russia into having too much food and oil while the rest of the world goes without. Seriously. That is his plan.

We are screwed, but we knew that already

Our goose is cooked.

This doesn’t come as any sort of surprise. The big surprise would be if that dementia-ridden, retarded pedophile ever told the truth or kept his word.

I would like to think of something to say that would add to that but I can’t.

Or turned down a kickback.

If there’s a country on Earth that *isn’t* laughing at us, I’d like to know its name.

Laughing at us, or remembering he has his hands on the nuclear codes. Then rather than laughing, they’re scared to death.

He cannot remember the codes due to his poor memory so he keeps them on a sticky note on his desk. At the bottom of the note is says, “the end.”

Someone needs to pay for allowing Sundowner to run around with gasoline and a match all over the world.
Lock him up in Delaware for God’s sake

Well, his wife seem to try to lock him up there every weekend that she can. My problem is determining whom I think would be worse, Brandon or the VP.

Well, Kamala wears the pants in her family whereas Joe asked Dr Jill, “What are pants?”

Biden, trying to swagger by saying he hopes THAT man runs.
Puh-leese.

I keep picturing this in my mind: he’s on a stage, and, Vodville style, someone wields a shepherds hook from stage right and pulls him away.

This is the only part of his speech where he was saying what he really meant to say.

Send our Vegetable-in-Chief to Ukraine and the 82nd back here. Call it even.

That fool could drop trow and leave a doodie on the floor and the press would make it look like he was being super Presidential.. And Nanshee would say he was a perfect President. Obviously that is an exaggeration, but, it keeps happening again and again, with his ridiculous rambling responses..

“Obviously that is an exaggeration”

Every time I see Biden speak I am reminded of this piece from years ago:

“Biden is a notorious flapjaw. His vanity deludes him into believing that every word that drops from his mouth is minted in the golden currency of Pericles. Vanity is the most conspicuous characteristic of US Senators en bloc, nourished by deferential acolytes and often expressed in loutish sexual advances to staffers, interns and the like. On more than one occasion CounterPunch’s editors have listened to vivid accounts by the recipient of just such advances, this staffer of another senator being accosted by Biden in the well of the senate in the week immediately following his first wife’s fatal car accident.”

imagine being a career officer in the armed forces, pledged to defend our country and our constitution, and hearing a demented fool like biden speak

” and this is our commander-in-chief? “–jeezus

I don’t need to imagine it. I lived it. Want to see my retiree ID card?

Obviously I’m speaking to the choir here. No serious country would ever contemplate electing this vile, hateful dementia patient to any public office. Therefore, we are not a serious country. There are so many voters I want to slap around.

I am hoping that in both the US and Russia that some “more sane” people have disconnected the respective red buttons in front of their leaders from actually doing anything. There is a chain of command, and also a “chain of getting things done,” and both Putin and Biden are powerless if those below them refuse to go along with the insanity at some point. It isn’t like either are a Tony Soprano who is capable of going out and getting the dirty work done themselves in person.

Unlike Joe Biden who has done absolutely nothing his entire life except talk about Joe Biden, Putin actually had a real job before he became defacto Czar of the New Russian Empire. Unfortunately for us, that job was KGB operative and apparently, he was very, very good at it.

I wouldn’t bet the farm that the career KGB officer who once blew up an apartment building full of – checks notes – RUSSIANS – in order to fabricate a casus belli for a previous conflict, is going to put anyone other than a loyal sycophants in charge of two things: His personal security and the nuclear launch apparatus.

Make no mistake, if we’re lucky enough to live through all of this, I suspect historians will look back at this moment in time and declare that this is the closest we’ve been to nuclear annihilation. We have an egotistical mad man with short man’s disease that would make Napoleon blush who is in charge of Russia and a babbling imbecile who wears diapers and remember remember his previous meal in the Oval Office. Pray. We’re going to need it.