The handout also tells children how to get to a “women-owned sex toy boutique.” 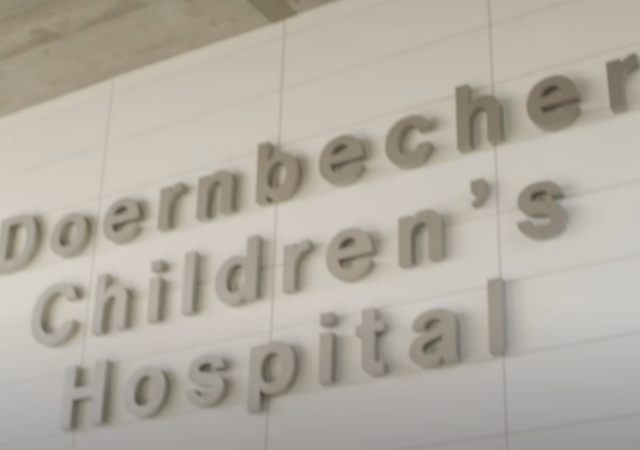 The Oregon Health & Science University’s Doernbecher Children’s Hospital has a handout for children of all ages on how to tuck away male genitalia to make your area “look smoother and flatter.”

The handout also tells children how to get to a “women-owned sex toy boutique.”

It states that “tucking is moving the penis, testicles, or both out of the way.”

“Tucking can reduce any concerns you have about your body, how your clothes fit and how safe you feel in public. People of all genders can tuck,” the handout states.

The handout goes into several “methods” of tucking, and states that individuals can do this at home.

“There are two main ways to tuck: with tape and without. You might find that simply wearing tight underwear smooths things out enough. Or you might want to use tape for as smooth a look as possible,” the handout states.

The handout from the children’s hospital points individuals to a self-described “women-owned sex toy boutique” store in Portland, which has gender-affirming clothing items as well as sex toys, videos and more, and states that while the store is for people aged 18 and older, it offers appointments before or after hours for “younger shoppers.”

A spokesperson for Oregon Health & Science University told Fox News Digital that it “proudly offers gender-affirming healthcare to patients of all ages, including children and adolescents.”

“Providers follow established, evidence-based medical standards, and employ a thoughtful, multidisciplinary process that involves both patients and their support systems,” the statement reads.

This story is unfairly presented. The headline creates the impression that the hospital is advocating “tucking” for boys generally. That’s not the case. The handout is targeted to patients who are already seeking “gender-affirming” treatment. (Presumably, young males transitioning to female. Nothing to tuck if a patient is going in the other direction.)

Your story also contains the sentence, “The handout also tells children how to get to a “women-owned sex toy boutique.” That might seem outrageous – except that the handout goes on to say the boutique doesn’t admit customers under 18, but patients can make appointments for PRIVATE consultations after regular business hours. Which presumably would be confined to apparatus appropriate to flattening male genitalia – not the sex toys. And why would the hospital recommend the boutigue? Well, you aren’t going to find “tucking” aids at your local CVS.

Gender dysphoria is hard enough to live with – for adolescents AND their parents. Presumably the hospital is treating trans patients with their parents consent. Not helpful to have contempt heaped on them by articles like this one.

Maybe they can add quotes from Buffalo Bill next time too?

Catering to mental illness is not the way to treat it. People with “gender dysphoria” cannot solve their problems by mutilating their bodies to supposedly match the mental image they have of themselves. True compassion would address the root cause of their dysphoria, not treat the symptoms by making cosmetic adjustments. Little wonder the suicide rate among transgenders remains high even after “sex reassignment” surgery – because problems with root causes that are mental cannot be fixed with a surgeon’s knife. Honestly, it’s reminiscent of the attitude that led to lobotomies as prescribed treatment of mental disorders, and it’s equally as cruel.

> … not treat the symptoms by making cosmetic adjustments
Tucking is not treating the symptoms either. And mutilating is CERTAINLY not treatment!

Don’t allow yourself to be pulled into their abuse of the language.

Read it again. The article says they have a handout, a brochure for anyone to read.

How would you feel if the same article replaced it with ‘gay conversion therapy?’

I have not properly read all of the prophesies in the Old Testament but I believe there are apocalyptic predictions the the effect that Good and Evil will be reversed. It’s been creeping in to America since the 1930’s.

You left out the part that was in another report that states that the flyer explained to young boys how to push their testicles back into their body’s via the inguinal canal. Doesn’t sound very healthy to me. In fact the natural condition of an undescended testicle requires surgery to correct. Nice suggestion coming from an alleged Childrens Hospital for obtaining a “smooth look”.