The timing of Sloly’s departure is so weird. 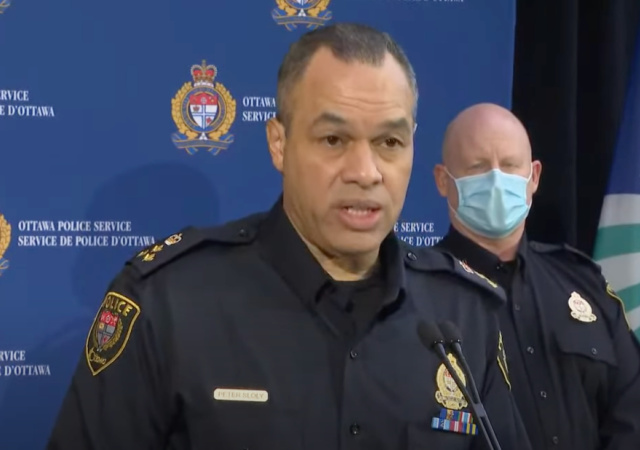 It’s weird. Trudeau invokes the Emergencies Act and then Ottawa’s police chief loses his job. I saw people say Police Chief Peter Sloly resigned, but it looks like the city was going to fire him.

Diane Deans, chair of the Ottawa Police Services Board, said the board and Sloly “reached a ‘mutually agreeable separation.'”

The Emergencies Act gives the federal government powers to help stop those pesky truckers in the Freedom Convoy.

The Associated Press reported that Ottawa Police Chief Peter Sloly lost his job because he could not handle the Freedom Convoy.

Please see my statement below. pic.twitter.com/2tfUDPiKTI

Sloly’s resignation comes as sources tell CBC News he’s been accused of bullying and volatile behaviour that has damaged relations with senior leadership and compromised the force’s ability to cope with the truck protest.

Multiple sources have told CBC News that Sloly allegedly belittled and berated senior Ottawa Police Service officers in front of their colleagues, and has failed to put forward a solid operations plan to end the crisis.

Sources say he allegedly has come into conflict with members of the OPP and RCMP tasked with assisting the city’s law enforcement efforts during the crisis.

Bizarre how all of this is coming out now and not before. If everyone had problems with Sloly you’d think they’d leak out this information at least last week.

Everything is strange about this move, especially the timing.

Interim Chief Steve Bell told CTV News “that with new resources flowing in from other police forces and new emergency tools from upper levels of government, he believes police have reached a turning point.”

However, Trudeau didn’t think “Ottawa has exhausted its tools and resources.” But then he invoked the Emergencies Act that provides the city with more resources.

But still. If Ottawa didn’t use all of its resources as Trudeau claimed then why give them more?

Just last week Sloly said he did not have plans to resign: “I came here to do a job and I’m going to get that job done all the way through.”

It sounds like Sloly did not want to start a war because it would lead to the loss of life and property. He considered everything a success because “there was no major violence.”

Then again, Trudeau’s declaration could have been too much for Sloly because he knows it has the potential to cause an outbreak.

I just cannot get over the timing, which is why I waited all day to write about Sloly’s departure. I wanted to get as much information as I could before saying anything.

Weird. Odd. Strange. Bizarre. I wonder if this will be the last we hear from Sloly.

Peter Sloly is connected to the #Plandemic.

Peter Sloly, the Jamaican-born police chief in Canada’s capital city of Ottawa, worked for the multinational consulting firm Deloitte before he took over the Ottawa police force. Deloitte operates the vaccine tracking system for the Canadian federal government and also for the Centers for Disease Control and Prevention (CDC) in the United States. Peter Sloly collected years of income from Deloitte, and now he is trying to use the power of government to force the Freedom Truckers out of Ottawa.

Whatever the timing and whether it was voluntary or not, he’s gone because he would not or felt he could not do what Justin Castro and radical bloodthirsty leftwing Karen Deans wanted done. She’s been calling for the use of force on the unruly disobedient impudent peasant truck drivers for awhile.

NYT is reporting Castro Jr may now order the arrest of tow truck drivers who refuse to tow trucks out of Ottawa. Canada’s Il Duce wants to use federal government dictatorial power to force tow truck drivers to work for the government and do something they do not want to do and have previously refused to do.

How many LEO’s will obey their new self-appointed Führer and grind their fellow citizens under their boots?

Hell no, he’s a Obama FBI trained creep. He’s gone because his force was in an uproar over his hatred for the Canadian citizens

So just a coincidence that the rank and file forced him out, at the same time Fidel’s pride and joy invokes the Emergencies Act? Possible because we’re talking about only a few days here.

The force doesn’t want to force.

It’s more than that. His frame of reference has been Castro, Mao, and Lenin since long before Obama. He isn’t trained, he has probably seen himself as a legacy destined to do great things.

I keep trying to get into his mindset. He is a dictator. Has no patience for people who ask questions or challenge him. He is possibly going through the paranoid stage that all of his heroes went through as they were consolidating their newfound powers. He is in a purge mindset right now and he is revealing it too early to succeed. He needs help from somewhere. He is clearly responding to Biden and is probably talking to China.

It’s up to the Parliament, particularly his own party, to stop him right now before he gets too far with this. Canadians will die if this deranged ego-maniac isn’t stopped.

According to the Daily Mail,
“Trudeaus’ Liberals, with the support of the New Democrats Party, have enough votes to ensure passage of the motion.”

“How many LEO’s will obey their new self-appointed Führer and grind their fellow citizens under their boots?”

I think that is the key to all of this. Just as provinces are ending the mandates, Trudeau seizes dictatorial powers. So for Trudeau, it is not about the mandates so much as it is to punish citizens who were engaging in lawful protests. Trudeau apparently is determined to destroy a lot of people. Someone needs to revisit all of his pro-Castro and pro-Mao comments from the past. There is something going on in this guy’s head that suggests blood-lust and he needs to be confronted point-blank.

Police Chiefs are politicians not cops. Further, there are only so many cops. If they pull in cops from other parts of Canada, those other parts will be in a great place to make things interesting. Government force will escalate this out of control. Sloly may have been smart enough to see this was a no win so he went out with an agreement. What if the new Chief talked tough to gain control of the police and will then side with the citizens? This is all uncharted territory with an agenda being driven by not the smartest of the people. We really do live in interesting times.

Since we will be fed information, we need to ask if it makes sense and ask why are we being told what we are being told right now.

Sloly but Shirley, things are heating up.

Upvoted, but really deserves 100 downvotes. Shame on you!

I am genuinely sorry, but, I just couldn’t pass that one up. It was just too, too, easy.

That wasn’t a softball, it was a Tee-Ball!

Can’t wait until Poopy Pants has to show Trudope how it’s done when the US convoy gets rolling. Poopy Pants is a lot tougher! Just ask CornPop.

I thought he was Rock Hudson’s knob polisher.

Speaking of free speech. Earlier today, Spirit Airlines removed a ticketed passenger from a flight for the heinous crime of – checks notes – wearing a ‘Lets’ Go Brandon’ mask. I know that while the Court has stopped short of applying 1A protections to private enterprises in the same way they do to government. But, they have also extended some 1A protections. Does anyone know if a case similar to this has ever been litigated, a case where a private business censors political commentary in this way?

It’s possible this is just a one-off incident of an employee who’s lost their mind and Spirit may be publicly apologizing, soon. But, if they do, we’re entering a period of American history that is likely not going to end well.

I can still remember those “Shit Happens” t-shirts back when that was considered very rude and offensive.

Since the federal government is mandating these stupid masks, it seems problematic (1A) for there to be restrictions (no obscenities) on speech attached to them.

That’s an interesting observation. Since I posted my comment, I’ve learned that this wasn’t an isolated incident. Over the pat several weeks, there were at least two other incidents where Spitit flight attendants made people remove similar masks.

I’m honestly surprised this isn’t a bigger story. Imagine how the media would react if they made someone remove a BLM or NAACP mask.

Spirit is a strange imitation of an airline. I recommend not dealing with them at all based on an inability to perform the basic function of flying from point A to point B on a pre-set schedule. I certainly would never do so again. But them being a Leftist enterprise explains much.

So as I read the evidence, “conscience” plays little to no role in this resignation. In that case, bad cop, no donut.

Why is this bullshit not hitting the news wires????