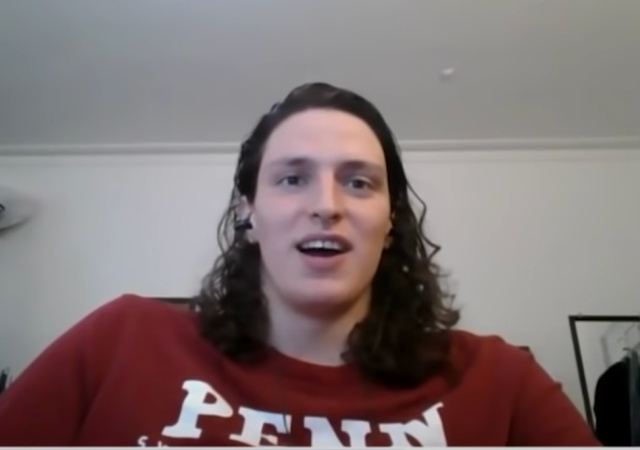 This is exactly what the left is counting on. Fear. Fear of being labeled a bigot or a transphobe, even though parents disagree with what is happening.

Lia Thomas, the transgender University of Pennsylvania swimmer who has smashed college women’s records since early December, was the high-point scorer and the only swimmer to win three individual events at the Ivy League Swimming and Diving Championship last weekend.

Thomas is “a totem in the culture wars,” Weiss wrote, embodying abstract and divisive debates about the meaning of male and female. Parents who wish to support minority rights — or simply align with the progressive elite — reached the limits of their liberalism as Thomas dominated their Ivy League daughters.

These parents helped get their children into the most competitive colleges in the world.

“They have opinions about everything,” Weiss wrote. “They will explain how there’s a $400 swimsuit that you can only wear once, but that might be worth it for the tenth of a second.”

“But as history unfolds in front of their noses,” Weiss stated, “they refuse to comment.”

One anonymous Penn dad at the competition addressed the issue directly: “No amount of hormone suppression will ever roll back the advantages Lia possesses because of male puberty.”

He and his wife said their daughters have received “veiled threats” from the university to discourage them from speaking out.

Says another Penn mother, “They haven’t asked our girls how they feel about any of this.”

Parents need to ask themselves, “Is this the country you want to leave your children? One where you’re afraid to stand up for them?”

The longer the parents delay in speaking on behalf of their children, the more my derision to them increases.

It’s not rocket science, they know it’s an issue. Yet, they’d rather keep their mouth shut and keep up appearance rather than rock the boat.

If that was my daughter, I’d put the school on notice and would be complaining-very loudly-to any media outlet willing to have me on.

It is working for CRT. Why not this leftist abomination? Why do we have to kowtow to such a tiny minority?

If you have a daughter, the left has just put her in the back of the bus. Or swimming lane, if you prefer.

if you won’t stand up for your children when they’ve been so blatantly wronged, what the hell sort of parent are you?–they are your flesh and blood–lord

“This is exactly what the left is counting on. Fear. Fear of being labeled a bigot or a transphobe, even though parents disagree with what is happening.”

“We love the Emperor’s new robes!”

Neither the swimmers nor their parents need to identify themselves to voice their displeasure here. And it need not be confined to UPenn’s people. Others (swimmers and parents) can and should—and indeed, in order to make this work, must—join the protest. All they have to do is turn their backs on him. He’s already severely disrupted the team and championships, and sport itself. His scoring and “record-setting” have destroyed the institution. There’s nothing left to this violence, except more and more of the same. The stated goal—and yes, they should issue a carefully-worded statement (“carefully-worded,” I say, in order to avoid or at least minimize the media and institutions’ distortions) focusing on questions of fundamental fairness, privacy, safety, biological disparities born of puberty, and related Title IX issues—should be obvious. Then say nothing. Silence and backs will speak volumes. There are already (reportedly) 15 or 16 Penn women who have spoken. A silent protest will give others courage to join them. The schools and league (and NCAA) won’t be able to oppose or stop them. 100% participation is unnecessary. Just do it!

Sure they do. Because they have been coerced into making public statements of support.

All that has to happen is for every biological female swimmer to line up on the blocks and ignore the starting gun. This ain’t a mommy and daddy issue. It’s a “big girl” issue. Act on your own and stop crying.

Someone said on another site: “If the cis-genders don’t like it, then they should start their own group.“

I said: “This IS their own group!”

The bottom line is that the transgender issue is dead. The NCAA made the initial mistake of adopting a single 12 month rule to apply to all sports without regard to physiology or hormone data. The NCAA wisely voted to get out of this issue and follow the rules of each sport’s national governing body. In this way, the same eligibility rules apply to colleges, national championships and Olympic teams. The Olympic movement has more money to hire experts in order to develop meaningful standards for each sport. They also have the money to test for hormone levels and possible performance enhancing drugs. The NGBs are geared to promoting fair competition, not quick swim meet victories.

Donations to Penn or its academic credibility do not depend upon its swim team. In contrast, USA Swimming would quickly lose its credibility and sponsorships if they pulled a cheap stunt regarding eligibility.