“While our prior databases on higher education and elite private schools served as educational tools for students and parents making application decisions, the medical school database serves as a wake-up call for the public to pay attention to the damaging racialization of medical education.” 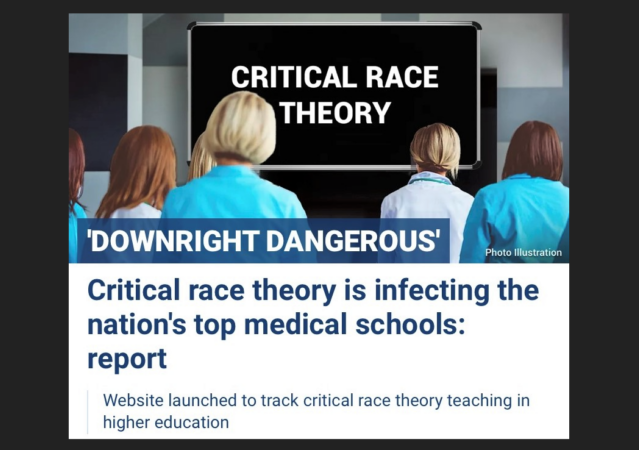 Today we rolled out a new database on the Top 25 Medical Schools.

At least 23 of America’s 25 most prestigious medical colleges and universities have some form of mandatory student training or coursework on ideas related to critical race theory (CRT), according to CriticalRace.org, which monitors CRT curricula and training in higher education.

The schools examined were based on the rankings by U.S. News’ rankings of America’s top medical schools. Of the top 25 colleges and universities, 23 had some sort of mandatory training and 21 have offered materials by authors Robin DiAngelo and Ibram Kendi, whose books explicitly call for discrimination, according to Jacobson….

“When a patient presents for treatment, that person needs to be treated as an individual, not just as a member of some larger racial or ethnic group,” Jacobson said….

“While our prior databases on higher education and elite private schools served as educational tools for students and parents making application decisions, the medical school database serves as a wake-up call for the public to pay attention to the damaging racialization of medical education,” Jacobson said.

I was pleased to see that we had good placement near the top of the Fox News home page this morning. 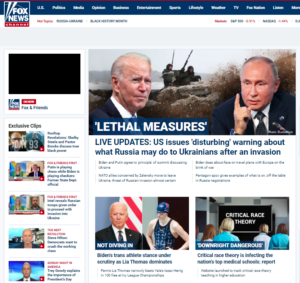 Head over to the Fox News article, which has many specifics on school programs, and of course to the Medical School database itself.

And here I thought these schools would focus on health care?

Critical Race Theory and the Hippocratic Oath are mutually exclusive.

Physicians are gods! If they say whitey gonna pay, then whitey better pay and like it.

Physicians also move in mysterious ways. If they turn a woman with a limp into a woman in a wheelchair, and still send the invoice for the operation, it was done for a reason that you can’t fathom.

1. Contact a fortune teller to see what the future holds
2. Ask Fauci for a vaccine
3. Call Orkin to fumigate
4. Tear everything down and call Psaki to build back better

When med schools make asinine statements like natural immunity is no longer science, or a persons sex is not defined by God’s biology, and now this bravo sierra…they’re toast. Good riddance.

The Left debases and wrecks everything it touches.

One would think that a medical/race/ethnic class would be of great benefit. Medical diagnosis and some therapies can be assisted by learning about the predisposition of certain populations to some medical conditions. This is certainly true in Hawaii where, for example, high blood pressure is common among the Japanese and Type 1 diabetes among Pacific Islanders.
However I hardly see what good it does teaching whites are supremacist which leads to the inference blacks are less capable . This is sociology, fabricated sociology at that, and has no place in a medical setting.
But it does make one think of the current mindless incompetence of physicians during the covid pandemic.

Part of the problem with CRT in med schools is that we are now being told that it is racist to consider those inherent differences. So being extra careful to monitor your black patient for diabetes or high blood pressure, and maybe starting treatment even earlier to head damage off is obviously unfair to blacks, or unfair to whites, or whatever. Likewise treating a patient by what they are rather than what they identify as is being racist or transphobic, or whatever. So if you have a male to female transition and they still have a prostate, you better not ever check them for prostate problems, because everyone knows women can’t have them.

This is not what is going on, LibraryGryffon. The goal is not to ignore conditions that genetically hit black (or other minorities) hardest but to find a way to “fix” past discrimination with present discrimination. This is political ‘science,’ not medical science. Period.

I know that what I was saying has been the case, and I’m sure what you are talking about is happening too. So we’re getting the worst of both versions together. The race/hate mongers want medical professionals to discriminate against those of European ancestry while avoiding looking at the real genetic differences (which would actually help reduce outcome disparities) and making sure that no one gets decent medical care anymore.

Instead of trying to improve the health care for those groups who have previously been discriminated against, they want to bring everyone else down to the worst level of care.

Well, yes, this is what leftists always do. The goal is that everyone not among the elite ruling class is equally poor, equally miserable, and equally hopeless.

Progressives envision and want to fundamentally transform America into a dystopian nightmare of fearful citizens, barely existing on the brink of starvation.

History is full of these stories, of these truths, of these crimes against humanity. These are bad, evil people.

Even Medical colleges have turned into Leftist Seminaries.
But then they mostly have fallen into the Covid scam and bowing to Big Pharma.

The worm has turned: trust no one UNDER 30!

Question: If CRT is steadily marching through the institutions does that mean the rights arguments against I are not as good as perhaps the right claims they are

If I must visit the ER, I shall apply shoe polish to my kisser first. I want to get me some of this equity stuff.

How is this possible? The Democrats keep telling me that CRT is not taught in schools!

Sadaat Shamille Johnson, 27, [not a physician] originally from Georgia but residing is the Salt Lake City area of Utah,…is well aware of CRT….well, you know the rest.

So, not a Koch brothers dark money conspiracy?
The National Education Association said it was.

My son will be starting medical school in the fall at University of Colorado. After 6 years in Boulder, (BA, year off for army basic and advanced, then MS) he still has not drank the Koolaid. I’m hoping this will not change.

I am saddened to see that my medical school, Albany Medical College, is not in the top 25 medical schools.
I would like to tell the L I readers that medical school students are adults.
A conservative medical student will not be influenced by this drivel.
If they are smart enough to make it into med school, they are smart enough to keep quiet, sit through the nonsense, and finish their training.
Once in practice, they will be among mostly conservative doctors.
We all want lower taxes and don’t want our cities burned down.
And lots of docs are gun enthusiasts.