Meanwhile, American sailors move in to the Navy’s newest base on Poland’s Baltic coast. 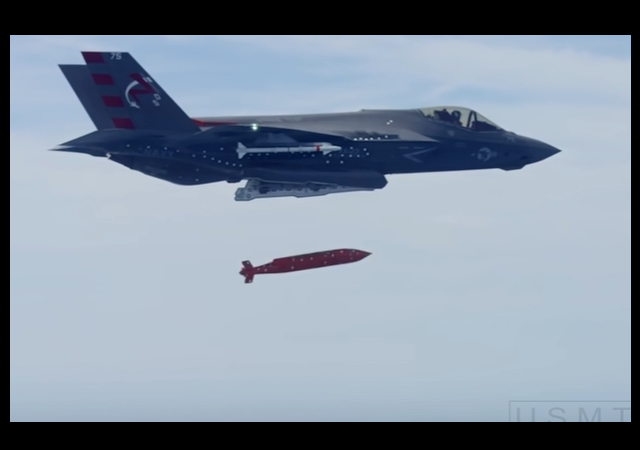 Earlier this week, a US F-35 stealth fighter pilot ejected as his jet crashed on the deck of the USS Carl Vinson aircraft carrier in the South China Sea, injuring seven.

The pilot was conducting routine flight operations when the crash happened. They safely ejected and were recovered by a military helicopter, Pacific Fleet said. The pilot is in stable condition.

Six others were injured on the deck of the carrier. Three required evacuation to a medical facility in Manila, Philippines, where they are in stable condition, according to Pacific Fleet. The other three sailors were treated on the carrier and have been released.

The cause of what the statement called a “inflight mishap” is under investigation.

Fortunately, it appears the injured are on the road to recovery.

Three of the injured sailors were taken to a medical facility in Manila, while the other four we​re treated aboard the ship.

Three of the four have since been released.

The F-35C is the world’s only long-range stealth strike fighter designed and built explicitly for US Navy carrier operations. However, that may not be true if China beats us to retrieve the downed aircraft.

The U.S. faces a race to beat China in recovering an F-35 stealth fighter that plunged into the South China Sea on Monday after what the Navy termed a ‘landing mishap’ aboard the USS Carl Vinson.

…The $100m warplane, customised for naval operations, plunged overboard – making it the second time in three months that an F-35 has been lost at sea.

The U.S. Navy is making recovery operations arrangements for the F-35C aircraft involved in the mishap aboard USS Carl Vinson (CVN 70) in the South China Sea, Jan. 24,’ a spokesperson for the US 7th Fleet told DailyMail.com.

‘We cannot speculate on what the PRC’s intentions are on this matter.’

It leaves the Navy with a complex salvage operation if it is avoid its most sophisticated warplane, crammed with futuristic technology, falling into the hands of the People’s Republic of China.

After American and Japanese forces recently completed a joint naval exercise in the Philippine Sea, China has been busy in the region.

The flights by the People’s Liberation Army aircraft came a day after the United States and Japanese navies put on a massive show of force in the Philippine Sea, putting together a flotilla that included two US Navy aircraft carriers, two US amphibious assault ships and a Japanese helicopter destroyer, essentially a small aircraft carrier.

Meanwhile, on the other side of the world, the Navy recently moved sailors aboard its newest base, a strategic installation in northern Poland that will support NATO’s European missile defense system.

Personnel completed their move Thursday from off base into a $50 million multipurpose residential building at Naval Support Facility Redzikowo, U.S. 6th Fleet said in a statement Friday.

It integrates the systems of Navy destroyers based in Rota, Spain, and the Aegis capabilities at Naval Support Facility Deveselu, Romania, the Navy said.

We have China Joe at the helm, anyone want to place a bet?

“The pilot was conducting routine flight operations when the crash happened. They safely ejected…”

With the new Navy my suspicions are on the alert. Did AA have anything to do with this?

The F35 is pretty new. Did H1b engineering have anything to do with it may be a better question.

Sounds like the Navy is in full blown CYA mode. This is the 5th major incident in 2 months. Any chance it’s a female pilot who has had issues before landing on a moving flight deck, that over shot the arresting cables and slid off the back? In a couple of years we may find out.

I have no expertise in flattop operations but based on my memory of Top Gun and Hot Shots, it sounds more like short or maybe wide at landing. Missing long includes the option of jamming the throttle and taking off again. The sailors in immediate danger of a botched landing would be at the short end of the deck and an overly steep or slow descent would be more difficult to recover from.

Just remember, the F35 also has a VTOL option. Wires wouldn’t be involved.

Yeah, but I don’t think they exclusively use that. My guess is that it’s not the primary mode of launch and recovery if the more traditional method is possible as it would be on the Vinson. Certainly possible though. Either way, it’s all idle speculation.

You’re thinking of the F-35B (mostly used by the Marines). These are mostly used on the smaller carriers where their VTOL is needed.
The lost one was F-35C, the standard carrier version with beefed up landing gear and frame with a tailhook. No VTOL fan.

I’m thinking a snapped arresting cable, with the cable snapping once the aircraft was moving too slow to regain flight. That would account for both the numerous injuries on the deck, as well as the loss of the aircraft.

This is one of the reasons why you got (when I was in) an extra $110 a month in hazardous duty pay.

Rumor is it was a female pilot, who drove the jet off the deck trying to parallel park….

Kidding aside, there are excellent female pilots – if they’ve been hired on merit, not ‘Kamala Harrises”.

The great thing about military combat aircraft is that they don’t work if you can’t fly them.

Female military pilots are in my experience thus entirely capable and often have a size advantage over the men.

Yeah, FJB is arranging for the Chicoms to recover it.

Susan Rice probably slipped the coordinates to Hunter Biden, who sold them to the ChiComms.

What’s up with the US military? The other children seem to be able to keep track of their toys.

China has the blueprints anyway, thanks to Clinton, Obama and just about every US university.

More important; China, with democrat help, is using Russia to shift our military focus and resources to Eastern Europe. It’s incredible how easy it’s all been.

Secession is our only hope to.preserve our way of life.

At the end of WW II, the allies left massive amounts of arms that the Red Chinese used to gain control of all of mainland China.

Mao won due to Chiang’s incompetence.

I think it is a BS cover story to hide something inept.

The amount of funding the U.S. Navy gets a year is not consistent with these major incidents.

Defective planes, damaged submarines…..congress is literally borrowing from multiple generations yet unborn to make the U.S. Navy by far the best funded navy in military history what exactly are we paying for?

The best equipment still needs personnel. Concentrating on woke interferes with that.

The government just finished spending 10 billion dollars to build a 500 million dollar space telescope and got it 15 or 20 years late. The funding is very consistent with what we get for our money.

There was an expose about the utter incompetence of the Naval bureaucracy in allocating money and negotiating with Congress. Most of the money is poured into building new ships and weapon systems while existing ships are not given necessary repairs and are overburdened with pointless political missions to please some ally country.

“what exactly are we paying for?”

I’m saying this as a former Naval intelligence officer. If it is so f***ing secret, why are you flying it? Right off an adversary’s coast? Or, it’s mature. field it.

So stupid, isn’t it?

But them, looks who’s in charge.

WWII. Bureau of Ordnance. Torpedoes. They don’t f***ing work. I’ll relive the whole sweet, uhh, business of they don’t (blanking) work like it was just yesterday. It shouldn’t take a submarine skipper walking into the war room to demand action.

But, now, we have good feelz becuase napkins.

always you think it was a woman and she is incompetent

Sally Ride comes to mind as extremely competent as do others…

Not because it “was” a woman, but because of the history of affirmative action hires creating disaster in our country.

We are not a meritocracy.

Because the pilot was called “they”. Are any Siamese twins piloting Navy jets? If so, Asian pilot error.

What are those red dots?!?!

WTF are you talking about? Rear Admiiral Grace Hopper.

Thank goodness Trump had the foresight to open bases to Poland to counter-balance the Russian desires. Also, Germany is proving to be an unreliable NATO ally.

Six of one. Half a dozen of the other.

“The great thing about military combat aircraft is that they don’t work if you can’t fly them.”

They can still blow up. One thing that will never leave Explosive Ordnance Disposal divers short of work is crashed military aircraft. Just the fuel load is bad enough. They’re often armed. Somebody had to dive on them and disarm them.

You have to fit into a certain size range to fit into a cockpit. Consequently a flight suit. There’s really no difference. On the other hand, women seem to have a slight natural advantage resisting G forces.

I used to hang out with the EOD guys on the carrier. Lots of work for those guys on aircraft carriers as we tend to lose stuff. My brush with greatness. They talked me in to converting from intelligence to EOD. So while on cruise I took the diver physical fitness test. They were aching for officers. So I get back from cruise and call the SPECOPS detailer and ask, “How soon can you pick me up?” He asks for my designator. 1630, intel. Then he tells me no way am I going to be EOD.

Salvage and EOD divers have to be surface warfare qualified. Because at some point you have to command a mine sweeper or submarine rescue boat or some s***, Good news was that if you went SPECWAR as opposed to SPECOPS, combat swimmer i.e. SEAL, it just didn’t matter.

Long story short, I started swimming a mile a day because while I blew away the competition when it came to push-ups, pull-ups, whatever, my swim times were a bit off the mark. No way I was going to drown, but I used to brag that my 500 yard swim times looked like I was dragging Rhode Island to North Carolina.

I blew out my shoulders. One fine Saturday, thank God it was the weekend, I woke up and I couldn’t move my hand six inches to reach the remote. I’m watching something god awful and I want nothing more than to change the channel. And I can’t reach the remote.

On Monday I went to work.

Another guy who didn’t think things worked out like he would have liked.