The blast, which dwarfed nuclear tests, sounded the alarm for Tong’s residents. 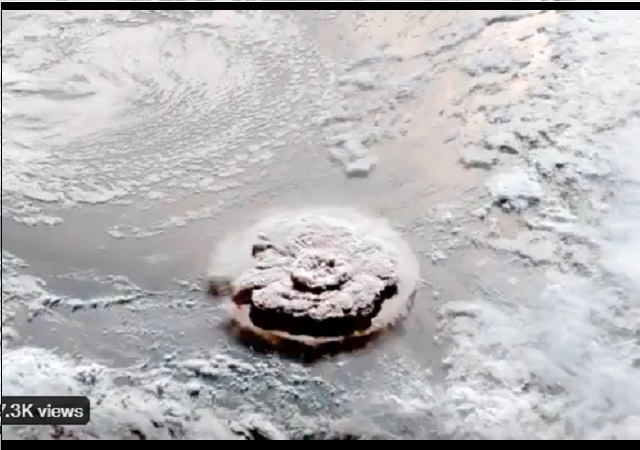 The damage assessments from the Kingdom of Tonga are now being reported.

Miraculously, the current death toll on the island chain is only three. The main impacts appear to be the ash-contaminated water and the damage to infrastructure.

In its first update since the eruption, the government said Tuesday it has confirmed three deaths — two local residents and a British woman. Concerns remain over the fate of people on two hard-hit smaller islands, where most houses were destroyed, it said. Communications have been down everywhere, making assessments more difficult.

But on Tonga’s main island of Tongatapu, perhaps the biggest problem is the ash that has transformed it into a gray moonscape, contaminating the rainwater that people rely on to drink. New Zealand’s military is sending fresh water and other much-needed supplies, but said Tuesday the ash covering Tonga’s main runway will delay the flight at least another day.

The limited death toll may be attributed to Tonga’s emergency preparedness planning and drilling. The boom from the final eruption acted as a tsunami warning for the residents, who headed to higher ground promptly.

Tonga is frequently battered by tropical cyclones and was also affected in 2009 by a tsunami that was centered on Samoa. Debris carried by tsunami waves also can kill.

Government officials and humanitarian organizations say this familiarity with natural disasters and continued preparedness likely contributed to the rapid reaction and saved lives. Despite being spread over dozens of islands, Tonga’s population is also tightly knit together by religion, extended family and respect for its monarchy.

The sound of the final eruption that triggered the tsunami was “like a bomb exploding,” said Marian Kupu, a reporter with radio station Broadcom Broadcasting.

“Our ears were ringing, we couldn’t even hear each other,” she said. “Personally I wasn’t scared,” she said. “The only thing that kind of scared us was that the disaster was different from the previous ones, which is always tropical cyclones.”

There is frequent conjecture in disaster, academic and wider circles about the effectiveness of tsunami warnings, said Ms. Greenwood. But in this case it seems clear that training and preparation in Tonga has reduced the catastrophic effects, she said.

To assist with the restoration of the region’s internet, SpaceX CEO Elon Musk offered Starlink terminals to Tonga residents.

In response to a Reuters story reporting that Tonga’s internet won’t be fully restored for at least a month, Musk tweeted: “Could people from Tonga let us know if it is important for SpaceX to send over Starlink terminals?”

His tweet brought to light a letter written by Shane Reti, a New Zealand parliament member. The letter was shared by another user. In it, Reti requested “urgent Starlink internet communications,” for Tonga.

According to NPR (take that as you will), a nuclear-test monitor calls Tonga volcano blast ‘biggest thing that we’ve ever seen‘.

The explosive volcanic eruption in Tonga on Saturday appears to dwarf the largest nuclear detonations ever conducted, according to a global group that monitors for atomic testing.

The shock wave from the blast was so powerful that it was detected as far away as Antarctica, says Ronan Le Bras, a geophysicist with the Comprehensive Nuclear-Test-Ban Treaty Organization in Vienna, Austria, which oversees an international network of remote monitoring stations.

In total, 53 detectors around planet Earth heard the low-frequency boom from the explosion as it traveled through the atmosphere. It was the loudest event the network had detected in more than 20 years of operation, according to Le Bras.

“Every single station picked it up,” he says. “It’s the biggest thing that we’ve ever seen.”

The violent eruption a few hours ago of the Hunga Tonga-Hunga Haʻapai volcano captured by satellites GOES-West and Himawari-8. pic.twitter.com/kCg5h7vfvS