Paul’s response comes in wake of C.D.C. admission that cloth masks do not protect against the virus “as effectively as other masks”. 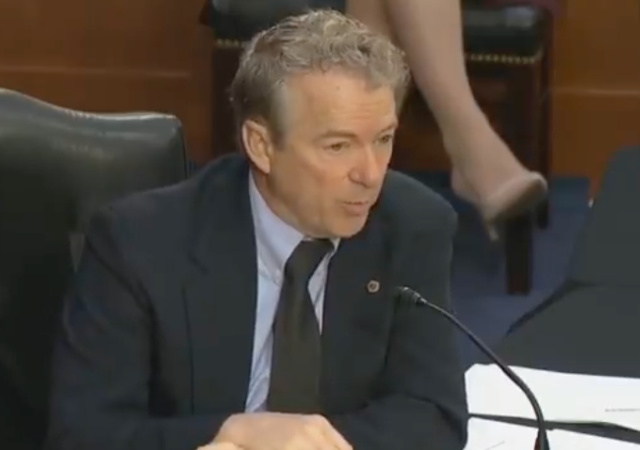 Of all the failed pandemic policies, perhaps the mask mandates have been the biggest losers.

They have especially proved useless during the recent surge of the Omicron variant.

The Centers for Disease Control and Prevention on Friday clarified its stance on various kinds of masks, acknowledging that the cloth masks frequently worn by Americans do not offer as much protection as surgical masks or respirators.

While this disparity is widely known to the general public, the update marks the first time the C.D.C. has explicitly addressed the differences. The agency’s website also no longer refers to a shortage of respirators.

Los Angeles mandated masks for all in July with 95+% compliance and has imposed incredibly strict vaccine passports, while Orange County’s had no mandate for 6 months & never had vaccine passports

Relatedly, cases in LA are ~95% higher than Orange County, cause none of it works pic.twitter.com/5fD96tgeeY

Despite the numerous reasons that the use of masks by the general public is destined to fail, the Centers for Disease Control and Prevention (CDC) is bitterly clinging to their use. Agency officials are recommending new and better ones.

The Centers for Disease Control and Prevention has updated its guidance to encourage Americans to use the best-fitting mask possible to limit the spread of COVID-19.

While the guidelines stopped short of recommending N95 or KN95 respirators, it dropped its language indicating concern about possible shortages of the face coverings. In the early days of the pandemic, public health officials feared a shortage in such masks typically used by healthcare workers.

In its latest update Friday, the CDC “clarified that people can choose respirators such as N95s and KN95s, including removing concerns related to supply shortages for N95s.”

In August, YouTube suspended Senator Rand Paul over a three-minute video questioning the effectiveness of cloth masks. He is now wondering if the Big Tech censors will offer him a much deserved apology.

U.S. Sen. Rand Paul hit back at YouTube “censors” on Saturday after the Centers for Disease Control and Prevention acknowledged that cloth masks do not work as well against the coronavirus as N95 makes.

The Kentucky Republican wondered if YouTube would be apologizing for suspending him earlier this year for saying the same thing.

“Does this mean snot-nosed censors at YouTube will come to my office and kiss my … and admit I was right?” Paul wrote.

Does this mean snot-nosed censors at YouTube will come to my office and kiss my … and admit I was right?https://t.co/0BZ2HZHiZW

I think the chances of him getting an apology from progressive zealots are between slim and none. But it never hurts to ask!

The is some good news to be had, related to the Omicron surge. It appears to be peaking in the US as COVID cases flatten in New York, New Jersey, Maryland, and Los Angeles.

Statistics from Johns Hopkins University shows that New York, New Jersey and Maryland have all seen seven day-average cases drop in recent days. Deaths have spiked by 20 per cent in a fortnight to around 1,820 a day, but still sit far below the peaks of winter 2020, even though more COVID infections are being recorded.

In neighboring New Jersey, seven day average cases peaked at 31,090 on January 8. But Garden State cases have since dropped too, and sit at 25,060 as of January 12.

Over on the West Coast, Los Angeles has also seen a sharp drop in COVID-19 diagnoses after a recent record peak. LA County hit an all-time high of 52,200 cases on January 4. But on January 10, the most recent date for which figures are available, cases had slumped to just 9,300.

The shape of each area’s peak mirrors infection curves seen in South Africa – where Omicron was first detected – as well as the United Kingdom, which was hit by rocketing new cases weeks before the US before seeing a near 40 percent drop in cases this week.

I suspect that when this particular variant wave ends, the Biden administration will declare victory thanks to the new recommendations. Should there be another wave, then the Kabuki theater of pandemic response will continue…complete with masks that have failed to stop the spread every time they are tried.

I would not recommend Rand Paul to hold his breath waiting….

When I clean the pellet stove, I wear a mask. Same when prepping the bottom of the boat for new bottom paint. Those masks do a great job. Same thing when using my soda blast abrasion but I use a respirator and a hood–that stuff goes everywhere and even with the respirator and hood I still can tell when the dust has gotten past the filters.

Those face masks I see at the grocery store do NOTHING short of making a lot of unattractive people less unappealing, bless their little hearts.

I actually drive about 20 miles away to shop for groceries from the same chain that is located in the community where we live. Same food, same company, but the local domestic terrorists are different.

Sure would be amused to watch Biden get a king size serving of Wuhan Delight.

He’s out of the public eye for long stretches so often, how would you know?

I have long thought that masking is the best thing that ever happened to ugly people, whether they are ugly on the inside, or on the outside, or both.

This is the real reason why masking will not go away any time soon.

For his unlawful election interference, Mark Zuckerberg belongs in prison.

As does George Soros

“Statistics from Johns Hopkins University shows that New York, New Jersey and Maryland have all seen seven day-average cases drop in recent days.”
not surprised – they’re all coming down to Florida

What is he doing? Trying to get us to all wear N95s?

There is nothing special about the size or “slipperiness” of the Omicron variant of COVID 19. All of the variants have equal ability to slip through masks. However, it does seem that Omicron can cause a noticeably symptomatic infection with a lower viral load. That’s why it is merely amplifying the failures of the masks for all to see. Filter masks are slightly tighter and protect you a little longer but eventually fail…only N95s that have been properly fitted to the face are actually effective. That said, I think a poorly fitting N95 would work better than a cloth mask or a neck gaiter.

If what you say is true, that is helpful information to have.

If you wonder why I am questioning, it is because recent history has renewed a personal penchant for not accepting statements as true simply because they are uttered. Old-timey, I know.

They’re still lying. They offer no statistically significant protection whatsoever, for the wearer or others, from respiratory viruses. Neither did N95s in surgical settings, in studies conducted before covid.

The last serious (clinical) study I saw of masks v. COVID said exactly that. The 5.4% effectiveness of cloth masks was within the study’s margin of error, and therefore considered statistically insignificant. Surgical masks were a little better than twice as “effective” (anything that around 90% ineffective should never be called “effective” in any way), but considering the margin of error could be only about 6% “effective.”

Watch when they use relative terms like “twice as effective” or “four times as many pediatric COVID hospitalizations”. That’s usually an indication that the numbers wouldn’t have an impact. Something “twice as effective” as something that is nearly completely ineffective is nearly completely ineffective itself. “Four times” a very small number of children in hospital is still a small number of children in hospital.

If you have any gap at all along the perimeter between your face and the mask, air is gonna do what electricity does and take the path of least resistance.

“I suspect that when this particular variant wave ends, the Biden administration will declare victory thanks to the new recommendations”

This is EXACTLY like what the pagans would do after the days would begin to lengthen again after they performed their Winter Solstice rituals. They were convinced that the reason the sun would ‘start moving’ again was because they did such a great job of sacrificing that goat or whatever.

It’s not just YouTube. It’s every platform that choose to ignore the existing data re mask efficacy and every member of the media who read or published the talking points they were handed instead of doing basic research and then piled on to support censorship.

LA’s case curve is straight up, then it looks like straight down. It took us 3 weeks to go from flat to a peak of over 55,000 (LA actually does their stats right: they move the initial announcement of a case to the actual day the person got covid. They do the earliest of symptom or test date. That’s why the number is different than above.) Then cases dropped off by 40% the first week, and are still going straight down. Looks like the whole surge will be 6 weeks.

Senator Paul should likely occupy himself with other tasks while awaiting an apology from any tech platform, let alone the gargantuan YouTube.

Yet is it not the case that we can all count ourselves fortunate that not only do we have censorship outsourced from the government to the private sector, insulating it from Constitutional challenge, we also have federal agencies and officials who will redefine words to suit their ends whenever they have been perceived to have gone awry.

For example, the Covid-19 vaccines are not vaccines. Rather than acknowledge this, federal agencies have changed the definition of ‘vaccine.’