“It also says one has ‘privilege’ if they are a ‘Military Kid,’ drawing shock from parents” 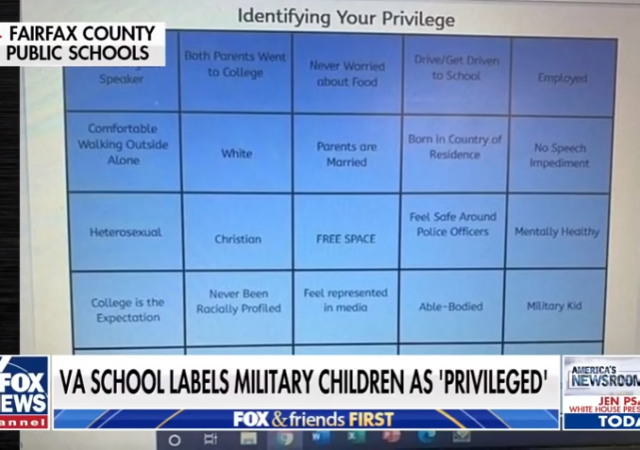 Public schools in Fairfax County, Virginia, have students doing a classroom exercise involving the game of Bingo with a “privilege” card.

The Bingo card reportedly singles out children of military families as being privileged.

Fairfax Schools Tell Children Of Military Members That They Have ‘Privilege’

A Fairfax County (Virginia) Public Schools curriculum has students play “privilege” bingo, giving them privilege points if they are white, male, employed or “involved in extra curricular [sic] activities,” or “feel represented in the media.”

It also says one has “privilege” if they are a “Military Kid,” drawing shock from parents who pointed out that children of military members must move away from their friends constantly, not see one of their parents for months on end, potentially deal with post-traumatic stress disorder, and risk becoming orphans.

Parents who complained received a note from Assistant Superintendent Douglas A. Tyson that said:

The screen shot you reference comes from an approved FCPS English Curriculum lesson that is centered around students selecting a “choice” test and examining in detail the author’s perspective on a wide-range [sic] of issues. Students are asked, in the lesson, to read critically and think critically about the author’s perspective on several fronts including the author’s privilege that may or may not be present in the work. Students are then asked independently and self reflectively to juxtapose their thoughts regarding any perceived privilege they think they may have and how they would potentially rewrite portions of the text. Students are not asked or required to report out their self-reflections. This lesson is an adept vehicle to push student thinking to challenge the author’s thoughts/conclusions and to sharpen their ability to critically read selected texts.

This is the first time that I’ve ever heard that military kids are somehow privileged.

You can see a copy of the Bingo card below:

This "approved English curriculum lesson" from Fairfax County Schools cites being a military kid as having privilege.

The whole activity is awful. The claim that military kids have privilege is grotesque. https://t.co/vrB7KXtJ89 pic.twitter.com/29T1aovvxs

A disabled veteran named Joe Mobley appeared on FOX News yesterday to react to this and called it absurd and offensive.

“Everyone involved in “approving” this racist crap should be imprisoned.”
I prefer Drawn and Quartered

The true privilege will be the ability to avoid any real consequences from this situation by those that designed, promoted, approved and implemented this farce.

I think we can all agree if you live in Fairfax County, Virginia color isn’t w2hat your privilege comes from.

Comically ‘military kid’ is one of only two boxes on there that I tick.

Being a ‘military kid’ comes with privileges like having a parent serving overseas in a warzone, not seeing them for months with the risk of them never coming back, being shot at, being targeted by terrorists, having your school bombed, being moved away from friends multiple times through your childhood, having your education fragmented, getting guns pointed at you and having adults you know die young.

I guess they forgot all that and focused on the lower crime rates in military housing, shit though it is.

Military kids are privileged because they only have to spend 2-3 years at their bullshit school.

I looked at the card scored multiple BINGO, horizontal, vertical and diagonal.

Only thing keeping me from a “blackout” card (another word which needs to be removed from the Herero-cis-privilege dictionary) is the for “Never Worried about Food”.

I’m always worried about
Food – does the chicken have salmonella, did the waiter spit in my soup, is this really beef or is it road kill…

The one box Dems CANT select is third down on the far right.

How about native English speaker, Doc? If you were born here you have a big advantage over somebody who just got off the boat.

You have clearly never met natives of India, just off the boat. They speak better English than native English speakers.

Sweet Sister Josephine! They’re probably are mentally healthy too, able bodied, feel safe around police officers, parents are married, will soon be employed and have their own bedroom.

And what is wrong with road kill?

Fairfax County has a rather large military installation in the southern part of the county: Fort Belvoir.

That being said, the entire card is offensive.

Not to mention the Pentagon, Navy Yard, DIA, and similar military installations an even shorter drive towards the river, where most of the military breadwinners in that area work.

Hilariously, I can’t get a single complete line. Ha! Wait, does that mean I win or lose?

It means you are at serious risk of “sudden-onset privilege.” See a social worker immediately. One with pink or purple hair, of course.

You’re improving. I actually understood that one.

Oh, I was discussing some of the hard times I experienced and the response from a Leftist .. “oh.. so you want everyone to suffer just like you did? “

Remind hir that that’s the very definition of Marxist equity.

The FF County school board is just asking for it. Sow/reap gang.

I hate these people so f’n much.

Ah, the dreaded PMS. No wonder they are so bitchy.

Being mentally healthy counts as privilege? So anyone normal is now special.

How about tall, dark and handsome?

There are clearly discrepancies with the bingo card. There is no block to check for being an illegal. That is the greatest privivlege of all. All the rules that apply to everyone don’t apply to you.

Also I did not see a block to check if you have ever pulled the race card or benefitted from affirmative action.

Or if you live in government housing, receive welfare and foodstamps, have never worked a day in your life, yet you smoke, drink, wear new clothes and own a smart phone.

How ironic they included “never been racially profiled” in an exercise that labels being “white” as an automatic indicator of “privilege.”

Immortality privilege is a thing?

How about being privieledged if you had parents that didn’t make one bad decision after another. The problem with the ghetto is that they make bad decisions but expect, err, demand good outcomes. Until they accept some responsibility for their actions, nothing will change. They are no different than the alcoholic who picks up the bottle and wonders why everything stays the same.

I like the square “parents are married.” Unlike many of the other boxes, that’s one you can qualify to check, with some elbow grease. But I bet you fail at it. And that should teach you something.

Are having parents that are married a priviledge ?

Yeah, it’s a real privelege to talk to a stranger on the phone and have him tell you how your parent died. Vietnam was a long time ago, but I still remember how it felt to answer those questions.

The Rise of Karen.