Because she has so much more grifting to do 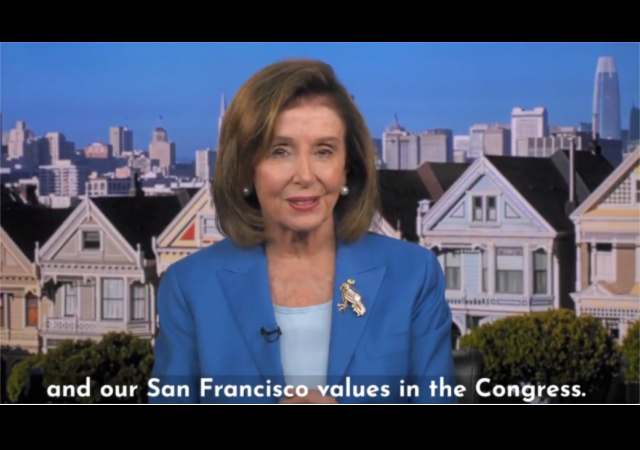 Pelosi announced she is running for reelection.

While we have made progress much more needs to be done to improve people’s lives. This election is crucial: nothing less is at stake than our Democracy.

But we don’t agonize-we organize. I am running for re-election to Congress to deliver For The People and defend Democracy. -NP pic.twitter.com/ojwFPOdRs3

She promised term limits for Democratic House leadership roles. That means if she wins she won’t be speaker again, right? Right?!

Sources told CNN she isn’t ruling out another term as Speaker. Why would she? The woman loves power.

The Pelosis also love their money. They’ve raked in millions since she joined Congress.

Both parties are guilty, but Pelosi is the top Democrat in the House and in making excellent stock movements.

I have just released the full trading report on politicians in 2021.

In short, many beat the market.

They traded more than ever before.

And they made numerous unusually timed trades, resulting in huge gains.

The purchases occurred from Dec. 17 to Dec. 21 — just days after Pelosi insisted in a press conference that members of Congress should be allowed to trade individual stocks despite often being privy to insider information that can move markets.

“We’re a free-market economy,” Pelosi told reporters, adding that members of Congress “should be able to participate in that.”

They sure love the free market when it helps them out!

She’ll still be getting elected when she’s in an iron lung. She’ll be the first 110-year-old House Minority Leader in history.

The Crypt-keeper on her throne,

I was thinking “Borg Queen” myself. But the opposite of sexy.

She doesn’t look a day over 90 but she consider that when she is no longer SoH she will not have a free government provided jet airliner to scurry about from one debauchery, to the next.

Here’s to an aneurysm or some ischemic incident. Foghorn Clyburn could eulogize her.

She can manage the cover ups as the minority leader.

She know minority. She be white lady and [stuff].

Why on earth would we want those “values” in Congress? $3K one bedroom apartments, homeless people on every street openly using drugs and defecating on the sidewalk, rampant theft and vandalism that goes completely unpunished.

To be fair, DC has most of these values already.

I saw that story about SF’s open-air drug market.

However, nothing but nothing,

Lots of videos on youtube. The scene/s are staggering!

If there’s a Republican in her district to run against her, the campaign ads almost write themselves. 15 second video of San Francisco streets covered in homeless people, used needles, human filth, tent cities, and other assorted squalor, voiced over by Pelosi talking about bringing San Francisco values to Congress.

I lived in the Bay Area a long time ago. I used to take the BART over to The City, go to the Castro where there was a very good barber shop, then hang around with my fellow beard-os a a coffee shop nearby.

One fellow I knew was “living” in the corner of a basement. Two burner hot plate, a toaster oven, army-bunk size bed, and his bathroom consisted of a toilet and pre-fab shower behind a curtain. Along one wall was a bank of electric meters for the apartments upstairs. In 2001 he was paying close to a grand a month for this, all for the privilege of living in a “gay friendly” city.

I pointed out that there are plenty of other places to live where, unless you are running around flaunting your homosexuality loudly and obnoxiously (he did not), things were just as safe, and far better.

He just didn’t understand. He also, like so many others I knew there, was a miserable, sad man.

The only happy ones I knew were those who got great places to buy before the market went completely insane, and had great jobs.

Of course she is going to run – her broker told her how bad her portfolio would tank if she didn’t stayed dialed in on the insider info.

In her case: let them eat Breyers.

She’s only at 35 years. Going for 5 decades so she can run for president.

More importantly, she may have some explaining over her Jan 6 and witch hunt roles.

Xi called.
He left a message.
“I’ll tell you when you can quit.”

Will anyone even try to give her token opposition?

California uses a “jungle primary” system nowadays, which ensures that her token opposition will be another Democrat even more loathsome than she is.

Welllll… I did say token…

Yet more proof that herpes lasts forever. Be careful who you vote for commies.

Great. Then there are these too useless rinos (McConnell and McCarthy) looking to hog OUR victory:

Heard they raised the capital dome to accomodate those brows.

Her running again is for impeachment and prosecution insurance.

In similar vein, I saw an interesting comment about Biden and the Ukraine. IF the US doesn’t defend them from Russia, might Ukraine go public with the goods on the Biden crime family?

She can’t be impeached, so she doesn’t need insurance against it. And if evidence of her committing a crime ever surfaces she can be prosecuted regardless of whether she’s still in congress. So running doesn’t help her with that either. If anything, retiring would guarantee that everyone would lose interest in investigating her.

She is impeachment insurance for Biden and Harris as Pelosi is 3rd in line.

There are places in CA that are already charging $6.79 a gallon for premium. Does anyone think that when it goes to $10-12 a gallon anyone will want to hear anything a Democrat has to say? 10 more months folks, then it’ll be (as Uncle Sam’s Misguided Children say) time for some “payback.”

I’m sure most of them will be happy as long as they can find enough gas to fill the U-Haul.

WHAT U-Haul? I left for good in 2005. People were already bailing, but the real rush had not started yet.

I had a trailer on reserve weeks in advance to make sure I could get one. Even then, the place I reserved it (Moorpark, which is Kraproom spelled backwards) didn’t have it. “Oxnard has one; I called for them to hold it!”

I went there, and people were lined up three deep at the counter clamoring for trucks and trailers.

No, they had no trailer after all. A local search found nothing, but after I called the main office in Phoenix, they magically found one. In Paso Robles!

I was slated to vacate my apartment two days later, and so I had no choice but to drive all that way.

They offered me a truck of similar capacity for trailer price, but I asked if they’d pay air fare back from Tennessee to get my pickup truck because they had no car haulers to go with the little truck. This was not to mention the extra fuel and meals and hotels.

When I got there, no trailer, but before I lost my temper, the young man at the counter explained that his dad was on his way up to another place to get one. An hour later, dad pulls in with my trailer.

This twatwaffle should be in a retirement home, not congress

If anyone bothers to even click on that link (doesn’t look like it), the Republicans are even worse than the Dems when it comes to insider trading. And there is Dan Crenshaw again. He makes every single corruption list I’ve seen and says the most stupid thing but is still known as a conservative. Now add Tuberville. The masks are still dropping but we know plenty already.

So don’t celebrate yet about these upcoming elections. Voters blindly switching to the Republican party might just further entrench the Uniparty if we don’t destroy the Stupid Party with the Democrats. We desperately need to allow Trump to clear the landscape this year. He is our last chance to get this done.

Victor Davis Hanson calling for the GOP to declare a new Contract With America:

At least SOMEONE is paying attention.

Unless, of course, you remember what happened to the original Gingrich version. We got like two points out of ten, the rest went fallow. And Gingrich’s excuse was that he never promised us it WOULD happen, only that they’d TRY to make it happen. And even that was a highly charitable claim.

She’s not going to be happy when she’s not the power.

Like shitting up the place and stealing with no consequence? Oh wait, you do that already, Nancy.

I thought she just bought a place in Florida?

Source for that? I thought it was just some random person’s speculation.

But of course even if she did, there’s no reason a wealthy Californian shouldn’t buy property in Florida if she wants to. It wouldn’t mean she intends to move there.

Right. She could make good money renting it out to some of her SF acquaintances through AirBnD.