Respondents overwhelmingly rated Biden’s mental and physical fitness for the job of president as “poor” (9%) or “very poor” (41%), compared to 18% who rated this category at “very good” and 15% as “good.” 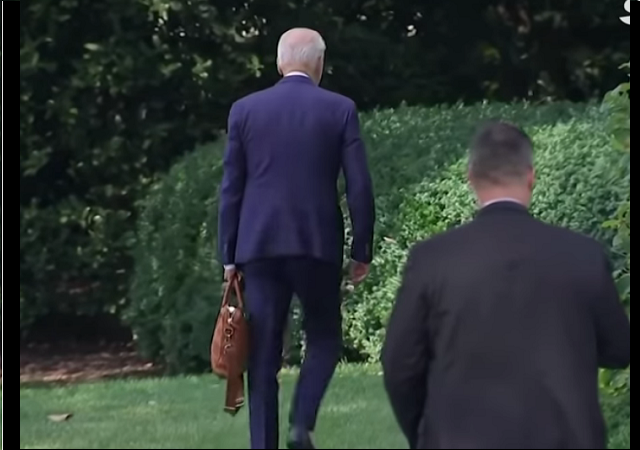 After only a year of Joe “I am the Democratic Party” Biden in office, the radical left is receiving still more disturbing news from one of its own. A new NBC poll confirms that no amount of gaslighting or fawning propagandistic coverage can hide Biden’s lack of mental and physical fitness from the American people.

His best marks came in being knowledgeable and experienced enough to handle the job, with 44 percent of respondents giving him either a “4” or a “5” on a 5-point scale — although that’s down from 55 percent who gave him high grades a year ago.

His worst marks came on being competent and effective (51 percent gave him either a “1” or a “2”), on being able to handle a crisis (52 percent) and on uniting the country (53 percent).

In between these high and low points, NBC polled on Biden’s mental and physical fitness for the Office of the President. The response was bleak, so bleak that NBC News didn’t even refer to it in their write-up.

Respondents overwhelmingly rated Biden’s mental and physical fitness for the job of president as “poor” (9%) or “very poor” (41%), compared to 18% who rated this category at “very good” and 15% as “good.”

Imagine if the media (other than Fox) actually reported on what everyone can see with their own two eyes? pic.twitter.com/ci5g1JImvX

The question I found endlessly amusing concerned the “presidential quality” (?!) of being “easy-going and likable.” This category seems to be an attempt to get Biden’s numbers up given that he is perceived on the left as being both. He’s neither, of course, and this poll bears that out in an even split—the hope, undoubtedly, was that it would be sky-high—among respondents: 23% rated this throwaway category as “very good” and “very poor,” while 15% rated it as “good” or “poor.”

Another indicator of presidential success, or in this case lack thereof, is the “right track/wrong track” question. A full 72% of respondents in this poll said that America is on the wrong track:

According to NBC News (linked above), the dismal numbers across the board are seen as such by both Democrat and Republican pollsters:

“This poll would have to be described as bleak, discouraging and truly terrible,” said Republican pollster Bill McInturff of Public Opinion Strategies.

Added Democratic pollster Jeff Horwitt of Hart Research Associates: “A year into his presidency, Joe Biden’s standing with the American people is diminished, and he is a smaller figure than he was when he entered the White House.”

I’m not at all sure what Biden can do to turn this perception of his mental and physical unfitness for office around. I do think it is wise for his team to keep him out of sight because this minimizes the chances of him getting handsy or sniffing little girls’ hair, saying “you ain’t black” if you don’t vote for him, telling gigantic and laughable lies about his personal history, dozing off in meetings with foreign leaders, doing that weird lean-in whisper thing that is beyond creepy, getting lost on the White House grounds, or calling his own voters lying dog-faced pony soldiers.

Oh, and definitely no more rambling stories about letting little black children play with his leg hair or shouting that everyone who does not support his policy ideas (including his fellow Democrats) is a racist of the ilk of Bull Connor

In short, the only way to make Biden appear likable and mentally fit for office is to keep him hidden away . . . because he is neither.

Hell, I’m just surprised his poll numbers are as high as they are….

Me, too. But he has no base (like Obama and Trump have), so there is no limit to how low his numbers will go. He’s not changing course, so they are headed into the 20’s. Or even lower. No one is enthusiastic about Biden, a Biden supporter. Right now he is being propped up because he’s a Democrat (i.e not an ebil Republican), but that won’t last as his disastrous policies continue to destroy American lives.

There are a lot of lefties bailing on him . . . because of mandates, inflation, culture crap. And there will be many many more (as long as he refuses to change course; if he pulls a Bill Clinton “the era of big government is over” ‘triangulation,’ all bets are off, Americans would eat that up and his numbers would skyrocket. Sadly.).

Fuzzy, if he does the “big government” triangulation, who would he get to believe him? He couldn’t articulate it, even if he tried.

Besides, the committee of puppeteers would never do that sort of thing. They’ve gotta be totally beholden to the Lefties.

Because of his incompetence and titanic corruption, Biden was stuck where he is to finish the destruction Obama began.

And destroy he is doing. That half-wit slut Harris was put in place to do the same: only she is going to be disposed of too. “They’re” already floating (as if that beast could float) Michelle Obama.

The left’s/swamp’s/Islamic/Red Chinese powers that be laid out a plan that even they – but for the speed bump of Trump -are shocked how well it’s working.

His improvised base was always built around unification and leaving people mostly alone unless absolutely necessary.

He has not done that in the slightest so it’s no surprise how quickly his support fled.

33% believe his mental/physical fitness is either very good or good? Who are these people? Are they suffering dementia themselves so they see themselves in Biden?

People who would vote for a confirmed dead Joe Biden (or Eastwood’s empty chair) over any living moderate or conservative. It’s scary how many of them there are but hopefully they are oversampled.

I think it’s Obama who is behind Biden, pulling the strings, and Biden is too stupid to see that he is being played–it won’t be Obama who will go down in history as the worst president this country has ever seen.

And who has their hand up Obama’s bottom (that is, aside from recreation): Soros.

There’s simply no way to polish this turd.

When is CNN going to trot out the psychiatrist and diagnose Biden from afar?

Those same shrinks need to diagnose those on “our side” who are still on the fence about Trump.

There are good reasons to be on the fence about Trump. His polarizing demeanor can cost him significant votes…there’s no denying it, even if you and I would vote for him.

Hmmm…Where is Mind-Reader Psychiatrist Brandy X. Lee on the issue? Have her masters in China told her the diagnosis yet?

They fired her, didn’t they? CNN probably hasn’t found the right massage parlor yet.

Would you trust Biden to correctly deliver mail for a single day….after a week learning the route? How about walking a child across the street? Maybe cooking a 3 course dinner?…..

He’s president in name only.

Obama had bad ratings throughout 2010, he lost congress, kept the senate then went on to win re-election in 2012.

The reason is approval doesn’t always measure who you will vote for.

The anti-capitalists who don’t like Joe Biden because he is a capitalist who hates socialism are not voting Republican.

There is also 2 more years for Biden to turn things around.

He is down but not out, same as Obama at the same time in his presidency

“The reason is approval doesn’t always measure who you will vote for.”

Another reason is that you can count on those GOPe folks you suck up to to always be able to find some stultifying pissant to nominate who is worse than whoever the Democrats are running.

So Romney was worst than Obama? His policies are identical to Trumps glad you liked Obama’s second term however.

Bernie Sanders voters hate capitalists including Biden but are going to vote for Biden.

When do you think the MSM will start pushing for VP Harris to move into the oval office?

My guess is sometime following the midterm election results.