US Army is now struggling to lure soldiers into certain critical jobs, so is offering $50,000 elistment bonuses. 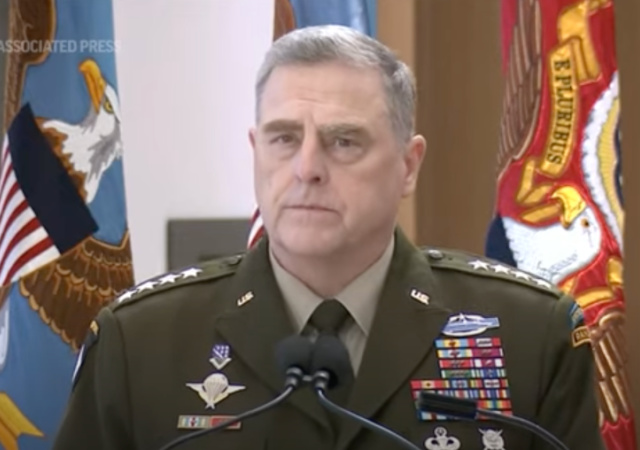 How It Started: The Department of Defense dutifully enacted Biden’s vaccine mandate and had what eventually morphed into “zero tolerance” policies for service members requesting religious exemptions or who had already had COVID19.

Gen. Mark Milley, chairman of the U.S. Joint Chiefs of Staff, has contracted COVID-19 and has isolated himself following a positive test, military officials said Monday.

Milley has experienced “very minor symptoms” and will be to perform all of his duties while working from a remote location, Joint Chiefs spokesman Col. Dave Butler said in an official statement.

All seven other Joint Chiefs “except for one” were negative for COVID-19 in tests performed Sunday, Butler said.

Another of the “sophisticated and vaccinated” is now added to a growing list of those who have been infected, most likely with the Omicron variant.

Despite the big vaccine push, the virus is surging through the ranks.

The military has been seeing a sharp uptick in cases among service members in recent weeks, continuing a trend that began during the holiday season.

The DOD reported last week that there were 32,912 Covid-19 cases in service members around the world, marking a dramatic increase from one week earlier, when there were 13,940 cases across the military. Just before Christmas, the number was a far lower, at 5,285 cases.

We wish all our service members, including Milley, a swift recovery and a return to robust good health. We hope everyone enjoys their newfound and likely more effective natural immunity.

Meanwhile, between the Biden administration’s mandate and national defense decision, the US Army is having a challenging time meeting its recruiting goals. It turns out the decision to essentially shut down everything in 2020 had unintended consequences.

They are now offering a reasonably hefty bonus for signing up.

The U.S. Army, for the first time, is offering a maximum enlistment bonus of $50,000 to highly skilled recruits who join for six years, The Associated Press has learned, as the service struggles to lure soldiers into certain critical jobs during the continuing pandemic.

Maj. Gen. Kevin Vereen, head of Army Recruiting Command, told AP that shuttered schools and the competitive job market over the past year have posed significant challenges for recruiters. So heading into the most difficult months of the year for recruiting, the Army is hoping that some extra cash and a few other changes will entice qualified young people to sign up.

“We are still living the implications of 2020 and the onset of COVID, when the school systems basically shut down,” said Vereen. “We lost a full class of young men and women that we didn’t have contact with, face-to-face.”

The Covid policy may be an issue, but Afghanistan and transgender shows at military bases are likely contributing factors. It will be interesting to see if $50,000 is enough to make America’s young men and women forget the complete ineptness of Biden and his political choices for our military.

$50,000.
Remember when a $100 bribe from a local politician was enough to get the “hesitant” to take the jab? I told youse guys to hold out. You can thank me now.

The whole ABSCAM scandal wasn’t about Congressmen taking bribes but about how little money it took to buy one.

“We are still living the implications of 2020 and the onset of COVID”. Ad to that the onset of Bidenism and leftism.

So the only troops not getting covid are those kicked out for not being vaxxed? Got it.

Maybe someone should check his VAX papers.

I mean, the vaccine is so good and all that everyone must get it, we may suspect that he failed to take the vaccine. If he has papers declaring he took the vaccine, I think these should be closely inspected under suspicion of fraud.

In any event, another failure from the nation’s senior military officer.

The 3x vaxed CJC getting Rona is going to make the lawsuits more intriguing. They DoD can’t simply argue he is above normal normal age range. Doing so highlights the fact that the bulk of service members are 18-40 and the bulk of those under 30. IOW the Services are comprised of young, fit, healthy people who face little to no risk from Covid.

He probably got it in a consciousness-raising seminar. That’s what the ribbons are for.

All those medals and ribbons and pendants and buttons are a real COVID hazard. I hope he can continue to inhale with all that weight on his chest.

The reason this great man has so many medals is that he was very Brave Sir Robbin.

Gee, I counted 49 medals and badges (you have to look at the ribbons and count all the oak leaves, stars, clusters, and so forth attached to them) and NOT EVEN ONE “V” device for valor, so I do not think any of those 50 medals are for bravery though earning more than one per year since being commissioned.

Just pointing that out for accuracies sake.

Oh, I’m very sorry. I made a mistake. I went to his Wikipedia page, and there saw he has 59 badges, ribbons, and medals. The man is practically buried in them, and yet not a single one for valor.

My point is not really to disparage him. My point is that all this medal and ribbon awarding is simply a form of vanity on display.

I just recently saw a phot0 of a US general standing next to a Russian general, a phot taken during these Ukraine de-escalation talks, and the American general actually had more ribbons, medals, etc., than the Russian. There was a time we used to make fun of the Russians all festooned in medals covering nearly the entirety of the front of their uniforms, but now it’s us who do that.

We also used to say how you can judge the competency of a military by how many badges, buttons, awards and medals they march around in, and that it was directly inversely correlated. Incompetent militaries spend more time covering over their incompetence with medals than actually trying to get better and win wars.

Even in my time, this was becoming a problem in the US military, and I started to refuse “end-of-tour” awards, the so called “goodby kiss.” After sitting on promotion boards where very slight things on an officer’s evaluation could tank them, medals and awards were simply not looked at or considered at all, even for guys who had earned a Silver Star, which IS a medal for bravery in combat, who were passed over because they decided to extend their combat tour in country rather than take that major staff position on time. I came to understand that medals and awards meant nothing at all. Even then it was difficult to avoid them, and by the time I retired, if I put on my dress uniform and all the medals, I still looked like some sort of tinhorn third world dictator. I found it to be, frankly, embarrassing.

He received them for his Lewinsky skills

After much research I learned that he got four ass kissing awards, three ribbons for being a rabid never trumper. And and two more for taking his covid vaccine and a star for the booster.

“The man is practically buried in them, and yet not a single one for valor.”

If you’d dug a little deeper you would’ve found he has a religious exemption for valor.

“I found it to be, frankly, embarrassing.”

Good for you. You were obviously deserving.

That’s not possible. He got the jab…

I wonder if a fired service member can get the vax and get the 50k to come back.

Ahem. I hope Gen. Milley recovers with no adverse affects, and that his improved immune status prevents him from catching any more Covid variants. (and also that this experience will make him realize how dumb it is to fire employees and service members who already caught and recovered from Covid, which makes getting a vaccination worthless, i.e. all of the risks with none of the benefits.)

I hope unicorns are real.

I didn’t say I expected it to happen, just that I hoped for it. (Much like I hope unicorns are real also)

Your wish is more likely than georgefelis’s.

$50,000? Well, they DO cover the gender change operation too. Besides, this will bolster the performance levels of the women as real women are replaced.

The DOD reported last week that there were 32,912 Covid-19 cases in service members around the world, marking a dramatic increase from one week earlier, when there were 13,940 cases across the military. Just before Christmas, the number was a far lower, at 5,285 cases.

You’ll note they don’t say “deaths”. 60% of active duty are under 26, less than 10% over 40. And- no (actually few) comorbidities, as you can’t join up with one. And if height/weight standards are actually followed- no obesity, the biggest comorbidity noted in covid deaths.

He probably sucking down the Horse Paste as we speak.

I am sure the Army veterinary corps has a large stockpile.

Administration would be appropriate as Miley is a horse’s ass.

Hopefully, Great Leader Biden will be able to replace him with someone as aware of “White Rage”, not to mention, equally willing to inform America’s enemies we’re going to attack them, before we do so.

Given what we now know about US involvement in the Biolab in Wuhan, it puts a new spin on Milley’s closeness with the Chinese.

One thing keeping many from signing up is poor living conditions for those living off base especially those with families. Many stories out there about substandard housing with little oversight and follow up in keeping that housing stock livable.

so you wish Milley, one who advocated pushing vaccines onto service members, a speedy recovery?
I don’t.
I hope he has a painful lingering death for what he has done to service members.
I’m just honest about it.

Ditto. I hope he suffers just as I hope all communists suffer.

I certainly hope that the $50,000 is not enough to attract enlistees. My children are not of the age group the military wants, but if they or any of my nieces or nephews made noises about enlisting, I would have a long talk about them about a) going into a job where there is a high chance they would be used to suppress their fellow citizens, and b) that they would themselves be openly detested by those in charge of them.

Well, it seems that military vax mandate has done a lot of good …. not!

The pandemic of the vaccinated rages on, knowing no bounds.

His IQ test was negative, however……