“…but the Catholic school experience really resonates with me, and the sense of community is like a family, and so tightly knit.” 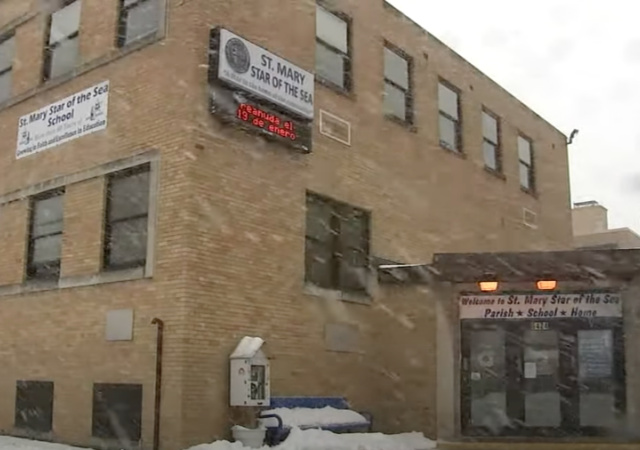 Catholic schools are the best. I’m not just saying that because I’m Catholic. They are literally the best.

I’ve chronicled the hell the Chicago Teachers Union (CTU) has put parents and students through for the past three years.

That’s when a lot of parents explored Catholic schools.

Christina Castro, 36, said she enrolled her three children in Catholic schools where they’re thriving. From The Chicago Tribune:

She enrolled her two youngest children at St. Ann School, just a two-block walk from their home, and transferred her eldest daughter, a junior, to De La Salle Institute, a private Catholic high school on the city’s South Side.

“We received financial aid — my older daughter earned a merit scholarship — and all three of my kids are thriving in their new environment,” Castro said.

Chicago Public Schools (CPS) didn’t open until mid-spring 2021. One parent told The Chicago Tribune she took her kids out of school halfway through the school year and put them in a Catholic school:

As the mother of two students previously enrolled at Waters Elementary School, Angie McKinney said her family lived through both the 2019 CPS teachers strike and numerous pandemic-era interruptions to their children’s education.

“We all hated the remote learning, which seemed out of control, and when I had questions, I couldn’t get a response. … It was a mess,” said McKinney, 42, who transferred her children, now in sixth and eighth grade, out of CPS and into her neighborhood Catholic school, St. Matthias School in Lincoln Square, halfway through the 2020-21 school year.

Between financial aid and budgeting, McKinney, who is a stay-at-home mom, said the family has figured out a way to pay the children’s private school tuition bills.

“I loved Waters, and all of the families there, but the Catholic school experience really resonates with me, and the sense of community is like a family, and so tightly knit,” McKinney said.

CPS opened in August 2021, but a lot of people stayed:

Greg Richmond, superintendent of the Archdiocese of Chicago Catholic Schools, said it’s too early to gauge the impact of the latest CPS shutdown on enrollment at the 157 archdiocesan-run schools in Cook and Lake counties, including 85 Catholic elementary schools and high schools in the city.

But in fall, months before the latest standoff between CPS and the CTU shuttered city schools for five days, the archdiocese schools reported a 5% jump in student enrollment — the first increase the school system has seen in 40 years.

“I know from talking with parents that there’s a lot of frustration right now,” Richmond said.

However, The Chicago Tribune reported that enrollment in the archdiocese schools went down by 8.2% for the 2020-2021 school year.

That might change, though. The CTU caused a mess after winter break, canceling school and causing more headaches for families.

The Catholic schools had remote learning the first two weeks after winter break, but they announced that in October. CTU decided at the last possible minute to walkout:

Back in Pilsen, Castro said after the recent CPS shutdown, she is hearing from friends who have grown increasingly weary of the ongoing battles, and are considering enrolling their children at St. Ann.

“I think there’s a lot of frustration with CPS, because they really dropped the ball, and they still have not been able to get it together,” Castro said.

“I knew it would be expensive to send three kids to private schools, but I thought, with faith, hope and prayer, we’ll figure it out, and we have,” she said.

The archdiocese has done more to raise money to help families pay for school:

The archdiocese raised more than $11.5 million through the Illinois Invest in Kids Tax Credit Scholarship Program to pay full tuition for 2,100 children from low-income families this year, and more than 4,700 children remain on the scholarship wait list.

Signed into law in 2017, the Illinois Invest in Kids Act allows those who contribute to the scholarship program to receive a credit of 75% of their donation toward their state income taxes, and allows donors to choose which non-public school receives the scholarship.

The archdiocese offers financial aid to families based upon need.

This is not only happening in Chicago. I Googled “Catholic Schools Growth” and found numerous archdioceses across the nation boasting about growing enrollments.

New Hampshire’s Catholic schools saw a 6.2% jump in enrollment in the past year after two years of inconsistent public schooling during COVID.

The enrollment went up in the summer of 2020. The Diocese of Manchester launched a program to help parents pay for tuition after the immense interest in the schools. Even after public schools opened 80% of the students stayed.

Unfortunately, many Catholic schools have closed while others are losing students. I’m not going to pretend it’s all sunshine and rainbows everywhere.

But it’s great to see the good outweighing the bad. Catholic schools are fantastic and the small community ensures communication and vigorous learning.

My bride is the admissions counsellor for the largest Catholic school in the Diocese of Richmond (pre-K through 8). All of the seats are filled and most grades have a waiting list.

The other interesting thing about Catholic schools is that they’re routinely willing to cut deals to help multi-kid families.

As a graduate of twelve years of Catholic education, I will say that I’m very grateful for the experience. I tell younger engineers that most everything that I need to know to work in engineering was taught to me in high school chemistry class by a wonderful, Notre Dame educated Benedictine nun with a masters degree.

Well, they (Catholic) dioceses get millions from us taxpayers as they engage in illegal border crossings and housings of millions of illegal aliens…
Nice to see they cough up a “few” bucks to the little people

That’s a fair point. Most folks have no idea how deeply involved the Catholic church is in creating a system of housing, transport and claims assistance that combine to create perverse incentives to illegal immigrants. Nor do most realize how much federal tax money from grants and direct contracts for service goes into perpetuating this system.

I have read some negative things (on this Board and others) about the recent trends in Catholic schools, but I am a strong supporter of Jesuit colleges and Catholic schools.

I’ve read some similar things, but my perception is the woke invasion of church schools is the exception. Catholic people, Orthodox people, Jewish people, Baptist people – we’re all people and not immune to stupidity. Stupidity seems to be the rule, however, in government education.

The Catholic dogma at least has literary value as allegory, unlike SJW dogma.

I’m a Jewish parent who was so appalled by the state of the California public high schools that I sent both my kids to Catholic school. The sense of community and focus on true academics and proper behavior was what first attracted me and there was total respect for our religion. Both kids had great experiences, especially my son, who played football all 4 years, including being a starter his last two. The coaches were great mentors who viewed sports as teaching life lessons. He has never forgotten those lessons and neither will I.

I am a teacher who has taught in both public and Catholic schools. I will never go back to public schools, under any circumstances. They are moral cesspits.

Ditto – we are a Jewish family and sent our son to Catholic HS, he’s in his second year and is thriving. A great experience. Younger son will go there too.

Even my son’s Berkely mom has given up on the public schoolsand he graduated after K-12 at the local catholic schools.

This should be the optimal time to force school districts to give vouchers to students to be used at any school they want. If the district gets $18,000 per pupil through taxes, the parents should be able to use that money to educate their children where they like, not just the Goobermint schools.

“found numerous archdioceses across the nation boasting about growing enrollments”