Omicron rebranded for the fun new pandemic era in which we all find ourselves. 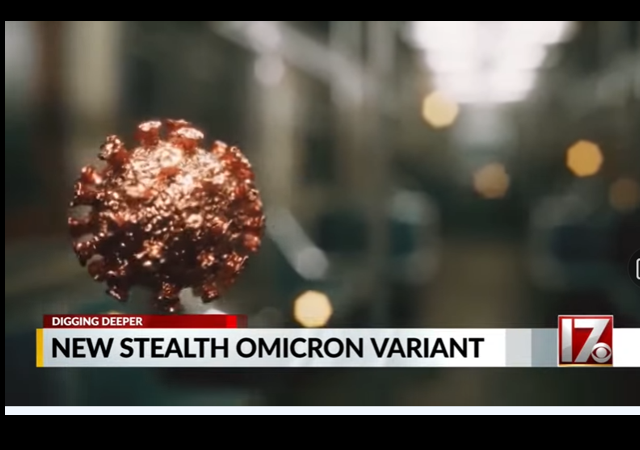 Another week in the “two weeks to flatten the curve,” so of course, another variant of the coronavirus causing covid has been identified.

The World Health Organization has just announced a new omicron variant, which is a sub-variant of the strain that is now surging across the country. Also known as BA.2, the sub-variant has spread to over 40 countries and 17 of the United States, with 10,000 cases recorded thus far.

It’s been given the click-bait handle of “Stealth Omicron” due to its ability to evade standard PCR tests that are used to identify which strain of the respiratory virus is involved in an infection.

…While BA.2 is still detectable through COVID testing, it’s harder to identify stealth omicron as an omicron variant in test results, per John Sellick, DO, an epidemiologist and professor of medicine at the University at Buffalo, in Health.

The efficacy of COVID vaccines against BA.2, its symptoms, and the chances of severe illness from contracting stealth omicron are still unknown as scientists investigate “the characteristics of BA.2, including immune escape properties and virulence,” per a WHO recommendation on its website. Stealth omicron is not cause for concern quite yet, as BA.2 isn’t listed on the WHO’s variants of concern list.

So far, cases of this sub-variant have been found in 26 states. Despite the challenges of detecting it, the sub-variant can still be identified using standard PCR tests.

It should be noted that BA.2 is still detectable, and the “stealth Omicron” nickname “doesn’t mean undetectable by our PCR COVID tests,” microbiologist S. Wesley Long tweeted last week.

It means that while a PCR test will still tell if someone has COVID, it may not tell them that they have BA.2 specifically and genomic testing would have to be carried out to determine that.

“It’s not that the test doesn’t detect it; it’s just that it doesn’t look like Omicron,” Long told ABC News on Tuesday. “Don’t get the impression that ‘stealth Omicron’ means we can’t detect it. All of our PCR tests can still detect it.

Another expert further challenged the new name. This analysis comes from Tom Peacock, a virologist at Imperial London College, who describes it as a sister lineage.

BA.2 is a sister lineage to BA.1. Currently both lineages are defined as the Omicron variant.

As @shay_fleishon shows – BA.2 shares a lot of mutations with BA.1, but it also has many differences https://t.co/MU5s54vVBZ

However, for a media still keen to milk as much drama out of the pandemic as it can, “stealth Omicron” was always going to be the handle to use.

If the cases in California are any indication, the subvariant will behave just like the dominant Omicron in terms of infection.

“So far we don’t really know how it behaves. My guess is it’s probably going to behave like the dominant omicron variant,” Cody said. “But we’ll see,” adding that she expects to learn more in the coming days and weeks.

Therefore, the sub-variant can cause headaches, fever, fatigue, sore throat, and muscle aches. In other words, for most people, it’s like a bad cold but rebranded for the fun new pandemic era in which we all find ourselves.

Meanwhile, clinical trials for vaccines (which are clearly leaky and do not prevent transmission) continue for children. Dr. Anthony Fauci predicts three shots will eventually be recommended for children under four…which is the population least at risk for the adverse effects associated with covid.

Two clinical trials of the Pfizer vaccine on children ages 6 months to 2 years old, and ages 2 to 4 are underway, but the older group hasn’t yet met standards, White House chief medical adviser Dr. Anthony Fauci said at a press conference.

“Dose and regimen for children 6 months to 24 months worked well, but it turned out the other group from 24 months to 4 years did not yet reach the level of non-inferiority, so the studies are continued,” Fauci said, referencing effectiveness standard comparison to adults.

“It looks like it will be a three-dose regimen. I don’t think we can predict when we will see it [approved],” he said — adding he can’t speak for the Food and Drug Administration.

If the vaccines can’t prevent transmission, degrade with time, and cause adverse reactions, why continue to press forward on these studies? By the time this trial has ended, I am sure there will be an even more stealthy sub-variant for the press to get excited about.

And here we go again.

I think the spell has broken to a large degree. Only the most neurotic and narcissistic will help keep it going.

The ultimate sub variant will be called ‘communism’.

This current path for our children and grandchildren is to eliminate liability to vaccine manufacturers without regard to efficacy or safety.

Geez…never said this for yearly flu or cold variant, yet now:

EVERYBODY PANIC!!! another minor cold virus.

Hey! That’s great! A stealth omicron variant to go with the stealth president.

That’s a pretty big place to be looking. That would make a needle in a haystack look rediculous in comparison.

It already does. Who puts needles in haystacks in the first place?

Were escaped monkeys on the highway involved?

They have no evidence of that so far, However, they were lead to it by a trail of banana peels.

If the vaccines can’t prevent transmission, degrade with time, and cause adverse reactions, why continue to press forward on these studies?

It’s All About The Benjamins
https://www.youtube.com/watch?v=0c58ppLPJcQ

Of course there is another variant, there will ALWAYS be new variants. It’s what viruses do…. they mutate.

This is nothing more than another panic-porn circle-jerk.

Don’t fall for it.

“It’s what viruses do…. they mutate.”

They’re not the only thing that mutates. Under the Biden administration the truth has mutated so far that it’s no longer be recognizable.

No, the truth is still just the truth.
Whatever these power hungry bastages claim is merely their “truth”. They corrupt the language first, then use that corrupted language to corrupt our minds.

It’s so hard to detect that not only does it evade PCR testing, but it evades the notice of 40% of the people who catch it because they are asymptomatic.

It’s also hard to detect anyone giving a damn outside of the Karen Cultists.

“ Meanwhile, clinical trials for vaccines (which are clearly leaky and do not prevent transmission) continue for children. Dr. Anthony Fauci predicts three shots will eventually be recommended for children under four…which is the population least at risk for the adverse effects associated with covid.”

… and this is evil. Kids are better off strengthening their immune system by actually catching a cold then being vaccinated against in them in most cases.

Google “Antigenic Original Sin” to understand the Hoskins Effect and see one way in which vaccinations can make things worse.

The negative impact of leaky vaccines in certain circumstances has been well documented with the flu – in one case in Canada the vaccinated did worse than the unvaccinated.

But not for 3 years. That is wrong.

It’s not that concerning, so let’s give it a scary name anyway to keep the panic alive and the governments an excuse to continue overstepping their bounds.

We’re seeing what would have happened if the common cold had suddenly appeared in 2019.

Per the White House Christmas greeting, we were supposed to be dead by Christmas. I know it’s a few weeks late, but singing this will make you feel better.

Christmas eve will find you
Vented and sedate
O You’ll be dead by Christmas
It’s science, no debate

You’ll be dead by Christmas
All who are unclean
The morgue is maxxed, you should have vaxxed
You’ll soon be 6 feet deep

the sub-variant can still be identified using standard PCR tests.

PCR tests have a massive, massive false positive rate. They’re useless for anything other than ginning up panic.

The province of Manitoba got hauled into court earlier this year and was forced to admit that when run at a cycle count of 18, COVID PCR tests showed a false positive rate of over 50% compared to the gold standard 7-day lab culture test.

They were then also forced to admit that they were running their public COVID PCR tests at cycle counts of 30-40. That puts the true false positive rate at somewhere between 50% and 93%.

There are anecdotal reports that other jurisdictions in Canada and the US are running their PCR tests are similar or higher cycle counts.

Any time you see case counts not accompanied by ICU admission and death counts, you’re being lied to.

Gearing up for the next Hair=on-Fire/Sky-is-falling pandemic excuse to rape-pillage-and-burn election laws/processes to the Dem’s advantage this coming November.

Never fear: we have Kevin ‘Boehner’ McCarthy to protect us.

Early news from Europe is maybe more contagious but not more severe than omicron ba.1

Another missing link in the highly surveilled SARS-CoV-2 Posterity.

Another scariant. Yawn. Wake me up when the “covid” nonsense is over.

Will do Nordic Prince van Winkle

My two daughters and then my wife had it last week. I was negative, but I sat with the girls for a few days on the couch watching the amazing world of gumball, like an old-fashion chickenpox party.

Well, I got it and felt terrible for a few days and I’m over it.

I’m a lecturer at a local university and I was telling a few of my colleagues, all liberal, about it, and you should’ve seen the horror on their faces! Pathetic p*ssies

May I just say hello and cheers to a colleague in the hidden minority of higher ed!

Are you in STEM too…there’s a few more of us here but still not many.

Did you bring your bell, so you could ring it as you moved around campus, screaming, “Unclean! Unclean!”??

Never mind that you shouldn’t be using PCR tests to diagnose disease in the first place, and the fact that PCR amplification levels are never disclosed so you can’t tell if they’re manipulating amplification to get the level of false positives they want.

People really start pushing back against covid measures, then by magic a “variant” appears. Indeed, variants seem to appear whenever politically useful. How do we know if they are real or fiction?

Just a reminder. B.A.1 has an estimated 99.5% of the COVID-19 infections right now. For B.A.2 to push out B.A.1 would require a significant evolutionary advantage. It might not have to be a significant advantage, if B.A.1 were at 10%, but is not. And almost always, the relevant advantages of the dominating variants are either greater infectivity and/or lower lethality. Lower lethality would be just fine, while higher lethality would put the newer strain at a competitive disadvantage.

So it evades the standard tests and is frequently asymptomatic…
I see…
These people aren’t right in the head.