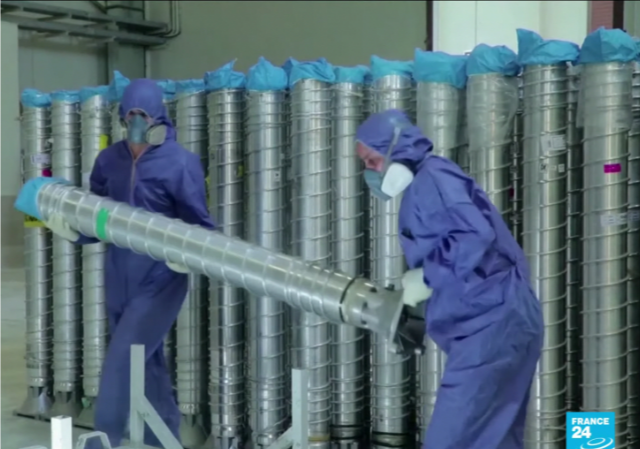 While the negotiators sent by the Biden White House are trying to restore the 2015 nuclear agreement with Iran during the talks in Vienna, Austria, the Iranian regime has stepped up the production of enriched uranium at an underground facility — bringing it steps away from building an atomic bomb.

The move brings Iran closer to acquiring a nuclear bomb. The IAEA “said Iran plans to enrich uranium there up to 20% purity — a short, technical step from weapons-grade levels of 90%.” The Associated Press noted.

While the Iranian regime rushes towards a nuclear weapon at breakneck speed, the Biden White House hopes to stop the genocidal Islamic regime in its tracks with the power of persuasion and diplomacy. “We continue to believe that diplomacy is the best way to deal with the challenges, the threat posed by Iran’s nuclear program,” Secretary of State Antony Blinken said at the onset of the Vienna talks.

Iran has started producing enriched uranium with more efficient advanced centrifuges at its Fordow plant dug into a mountain, the U.N. atomic watchdog said on Wednesday, further eroding the 2015 Iran nuclear deal during talks with the West on saving it.

The announcement appeared to undercut indirect talks between Iran and the United States on bringing both fully back into the battered deal that resumed this week after a five-month break prompted by the election of hardline President Ebrahim Raisi.

Western negotiators fear Iran is creating facts on the ground to gain leverage in the talks.

On the third day of this round of talks, the International Atomic Energy Agency (IAEA) said Iran had started the process of enriching uranium to up to 20% purity with one cascade, or cluster, of 166 advanced IR-6 machines at Fordow. Those machines are far more efficient than the first-generation IR-1. (…)

Until now Iran had been producing enriched uranium there with IR-1 machines and had enriched with some IR-6s without keeping the product. It has 94 IR-6 machines installed in a cascade at Fordow that is not yet operating, the IAEA said in a statement.

As nuclear talks proceeded further, the Israeli government urged the Biden administration to break off the negotiations in light of the latest revelations exposing the regime’s intent to build a bomb. “Israeli Prime Minister Naftali Bennett has called for an ‘immediate cessation’ of resumed nuclear talks between Iran and major powers in Vienna, accusing the Islamic republic of ‘nuclear blackmail,'” the French news agency AFP reported Thursday.

Unlike the Biden White House, the Israeli government has no illusions about the true nature of the Shia-Islamist regime. With President Biden White ‘engaged’ in diplomacy, the Iranian military threatened Israel with destruction. “We will not back off from the annihilation of Israel, even one millimeter. We want to destroy Zionism in the world,” the official Iranian military spokesman, Brig.-Gen. Abolfazl Shekarchi declared.

These are not merely empty words. The Islamic Republic is working on a detailed plan to realize its genocidal fantasies. A senior regime official linked to Iran’s rogue nuclear establishment recently admitted that the Mullah is running an active atomic weapons program. Fereydoon Abbasi-Davani, who is the former head of the Atomic Energy Organization of Iran, confirmed that the regime “has the ability to build a military nuclear weapon,” Israeli TV network Channel 12 reported over the weekend.

Time for a strongly worded letter….

But they told Obama it wasn’t for a bomb, only peaceful uses. I’m sure we can trust them.

Thanks, Ron Kline for the Iran deal that lead to this. sarc

Rub out Iran, at least enough of Iran that they will take centuries to recover.

Standing by while Iran creates a nuclear weapon is just one more indication of the collapse of Western civilization. As the US and the Euros submit, China and Russia will move in and basically control a lot of oil and shipping routes. The Saudis and others will get their own bomb, thereby making the US redundant and insignificant. As of today Israel is the first and last line of defense for the world.

If there is a nuclear conflict with Iran, I pray that Israel will destroy Iran. If the battle becomes existential for Israel, I hope she will drop a few big ones on the West fro good measure.

Israel and the Jews have been betrayed enough. Israel should not go down by herself.

Anybody who believes that Iran had not been enriching uranium all this time is a gullible fool.

The Democrats have known this entire time what the Iranians are up to. Those in charge of the left may be evil, but they aren’t stupid. By putting forward this deal that they then watch Iran violate with a wink and a nod is a feature, not a bug.

A logical progression from unconditional surrender, diversity, equity, inclusion, CAIR, and billions of dollars in state of the art military house warming gifts.

Has Biden surrendered yet?

Last time Biden waved a white pennant it turned out to be a false flag.

“Biden White House hopes to stop the genocidal Islamic regime in its tracks with the power of persuasion and diplomacy.”

Maybe sending a 747 to Tehran full of pallets of $100 bills might help.
Oh, wait. Obama already tried that.

About the only good option left is to call up Mossad and ask them exactly where and when they would like the smart bombs and bunker busters delivered.