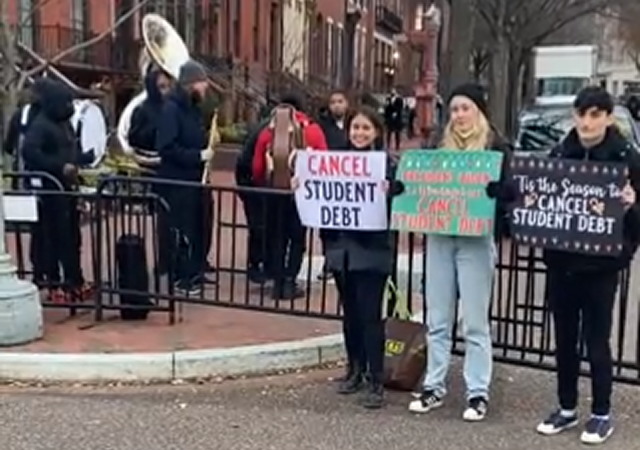 The Biden administration recently announced that the delay on making student loan payments is ending on February 1, 2022. Students protested at the White House this week but it looks like a pretty small crowd.

Hunger strike, singing: A day of college student protests at the White House

It was a busy day outside the premises of the White House as college students flocked to the nation’s capital to make their voices heard on a number of issues.

The Biden administration got a loud wakeup call this morning as a marching band accompanying a handful of college students jammed outside on the sidewalk of Pennsylvania Avenue to advocate against continuation of student loan payment.

Five students danced next to a marching band complete with a tuba, trombone, saxophone, and drums, while holding signs calling for President Biden to take action on student loan debt.

The other three include a clear-cut statement: “Cancel student debt.”

Campus Reform attempted to converse with the students, however was turned away by the event organizer. Although the students were willing, she ordered them not to engage.

A member of the band did tell Campus Reform that the protest was organized by MoveOn, a progressive public policy institute and political action committee.

A group of protesters urging Biden to extend student loan repayments/cancel them outright have brought a small marching band to the White House grounds this morning pic.twitter.com/Ux8Jd8UHyD

How many of the protesters took real majors?

Maybe they should all be in class, instead of protesting? Or at work? You ain’t gonna pay it off standing around outside the White House and tooting your horns.

So this is what they learned in college, huh? Make enough noise to annoy a poor senile old man, and then expect people to give you money to go away?

I’m beginning to suspect that that a college education isn’t all it’s cracked up to be.

Grow up and honor your word. You signed on to pay, now PAY.

If they’re not responsible enough to pay their debts … debts that they swore to repay … just what else are they irresponsible about?

What bothers me the most is not so much the money … it’s the disappointing and shoddy character of these people … and I see it in the human race ever increasingly these days.

Nothing says “Christmas” like a bunch of deadbeat students.

They signed the bottom line, now they have to pay up. Blame the colleges for useless majors and tuition prices that outpace inflation (maybe not so much now, due to Biden’s Bring Back Bankruptcy plan).

At minimum, they should have their names on a deadbeat list to be referenced when they apply for mortgages, car loans etc.

A better idea: cancel student-loan lending. Put this terrible scourge on a path to extinction!

… and watch how fast the problem disappears as the schools scramble to reduce costs to the point where students can afford to pay tuition without borrowing.