“Mr. Van Zile was intimidated, harassed, and assaulted by rally participants who turned on him after another participant identified him as a “rabid Zionist,” based on his knowledge of Mr. Van Zile’s editorials supporting Israel and criticizing its detractors. Mr. Van Zile informs us that he has not received more than a perfunctory response to either of his complaints.”

Last June 24, 2021, attendees at a rally organized by UMass Boston’s Students for Justice in Palestine (SJP) chapter harassed and assaulted a pro-Israel writer covering the event. The writer, Dexter Van Zile, reported on the incident, and it received coverage at the time, but the university has not sanctioned the students or SJP organization.

The assault took place outside Bank of America branch at 6 Tremont Street in Boston, half a block away from the Anti-Defamation League’s New England office at 40 Court Street. The ADL, whose CEO only subsequently acknowledged the existence of left-wing anti-Semitism, did not report the incident in its anti-Semitic incident tracker. 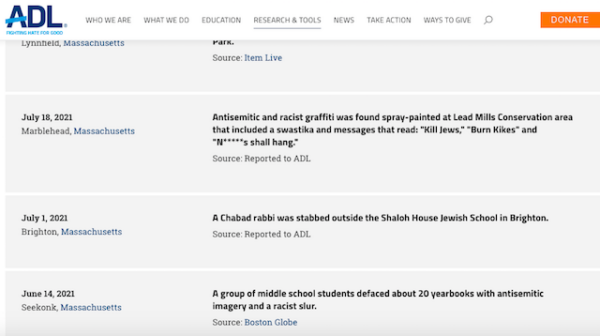 Enter the Louis D. Brandeis Center for Human Rights Under Law (LDB). In an October 26 letter to UMass Boston’s leadership, LDB argued that the perpetrators of the June 24 incident included UMass students, and that the incident violated both criminal law and the university’s student honor code.

We represent the Louis D. Brandeis Center for Human Rights Under Law (the Brandeis Center), a national public interest organization that works to protect the rights of Jewish and Israeli college students as required by law.

We are writing to follow up on complaints submitted by veteran CAMERA reporter Dexter Van Zile to this University regarding his experience at a June 24, 2021, rally hosted by a registered student organization eligible to receive funds from the University of Massachusetts Boston (the University)—namely, Students for Justice in Palestine (UMass Boston SJP). Mr. Van Zile was intimidated, harassed, and assaulted by rally participants who turned on him after another participant identified him as a “rabid Zionist,” based on his knowledge of Mr. Van Zile’s editorials supporting Israel and criticizing its detractors. Mr. Van Zile informs us that he has not received more than a perfunctory response to either of his complaints.

Because the University is aware of the misconduct that occurred at the UMass Boston SJP event, the University should investigate the incident and, to the extent it can identify students who were involved in conduct that violates the Code, appropriately sanction those students. Should the University fail to investigate as required, it will send a message to UMass Boston students that the Code has no teeth, and that students and student organizations are free to intimidate, harass, and assault individuals who attend their events, based on such individuals’ perceived support of Israel. Since Jewish students are most likely to be perceived as supporters of Israel, this affects every Jewish student on campus.

LDB also noted that harassment against Van Zile on the basis that he is a Zionist constitutes anti-Semitic behavior under the IHRA definition, which the Office for Civil Rights (OCR) essentially incorporated into its civil rights enforcement efforts under Title VI of the Civil Rights Act, after President Trump signed an executive order to that effect. The June 24 events thus violated the honor code’s prohibition against harassment on the basis of membership in, or association with, a protected group. (Van Zile is actually not Jewish, but the assault counts as anti-Semitic just as did the 2014 murders of non-Jews in Kansas City by a perpetrator targeting Jewish people and institutions.)

LDB explicitly asked UMass Boston to investigate Van Zile’s claims, sanction the students and student organizations responsible, and make a public statement deploring attacks on Jewish students and supporters of Israel. It also none-too-subtly cautioned the university that it “should also be prepared to deal with similar events if and when they occur again, on or off campus.”

From our prior coverage of SJP:

On the other hand, Mr. van Zile not hearing much from UMass may not necessarily be a bad thing.

It’s just as likely that if they did step in, it would be to target Mr. van Zile as the guilty party, not the victim, while exonerating the actual offenders.

Expecting constructive discussion or even courteous, non violent behavior from the left is akin to expecting the sun to rise in the west.

They are children having temper tantrum, filled with their own hubris and belief that they could never be wrong.

UMASS is just afraid of them. This is how the Nazis got power too.

The university administration is not afraid of the leftists.
They agree with them

“UMASS is just afraid of them. This is how the Nazis got power too.”

However I do like the growing tide of anti-Marxist lawsuits. It’s about time.

I was at a political rally yesterday, a BBQ for two conservative candidates. I was amazed at the number of attendees — most of them retired — wearing quite provocatively messaged T-shirts.

The one most applicable to this discussion wasn’t vulgar — it was just a gas gauge with the needle on E, under the legend “Our patience.”