“In light of the Kyle Rittenhouse trial, we want to clarify when and why we have removed certain fundraisers in the past” 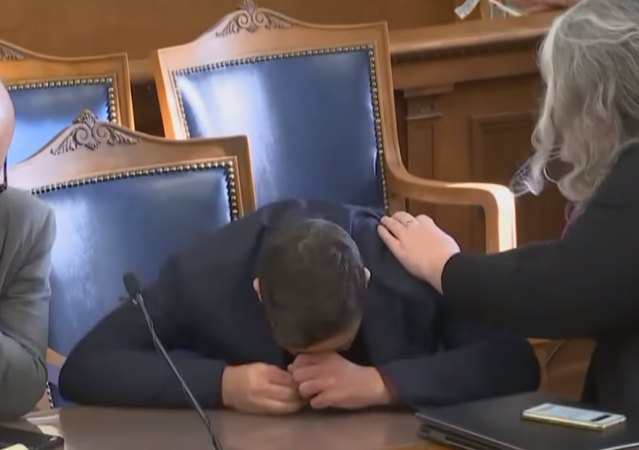 It happened to Kyle Rittenhouse.

Now GoFundMe will allow Rittenhouse to raise funds. Now that he’s been acquitted.

GoFundMe would not allow “replies” to its tweet, so a lot of people Quote Tweeted their responses. It was a hell of a ratio: 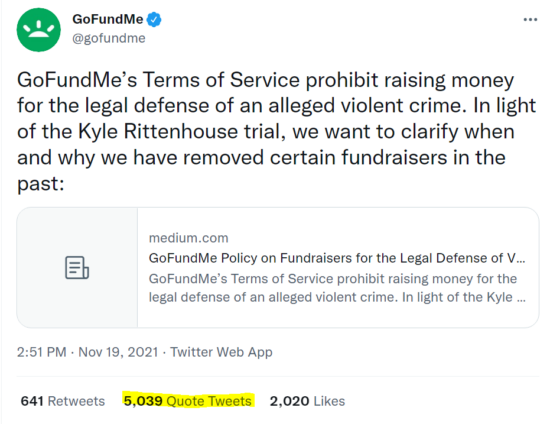 Here’s an excerpt from the statement (emphasis added):

GoFundMe’s Terms of Service prohibit raising money for the legal defense of an alleged violent crime. In light of the Kyle Rittenhouse trial, we want to clarify when and why we removed certain fundraisers in the past.

Once charges for a violent crime were brought against Kyle Rittenhouse in 2020, GoFundMe removed fundraisers that were started for the defendant’s legal defense. We did this as part of our regular monitoring efforts; in addition to those fundraisers, our Trust & Safety team removed hundreds of other fundraisers between August and December 2020 — unrelated to Rittenhouse — that we determined were in violation of this long-standing policy.

If someone is acquitted of those charges, as Rittenhouse was today, a fundraiser started subsequently for their legal defense and other expenses would not violate this policy. A fundraiser to pay lawyers, cover legal expenses or to help with ongoing living expenses for a person acquitted of those charges could remain active as long as we determine it is not in violation of any of our other terms and, for example, the purpose is clearly stated and the correct beneficiary is added to the fundraiser.

Here’s a small sample of the several thousand and growing reactions:

Lol they turned off replies

It was self-defense. Just like this gentleman, who too had every right to defend his life, and you seem to have no problem with this GoFundMe being on your platform. https://t.co/p3Ese3PGQs pic.twitter.com/XvP5MuCJlT

GoFundMe has zero problems with legal defense fundraisers for the Molotov Lawyers at the very same time they were shutting down Kyles.

I will fund this young man but you can bet your sweet bippy it WILL NOT BE “GFM” EVER. Someone will find another way for us to help him.

freekyleusa.org. You’re backing a winner now, so no more excuses!

A few years back I set up a GFM site for the family of a soldier who was murdered. Then I saw how much they took out (at the time 12.5 %), and it took almost two weeks to get the money transferred to her. I was willing to take the tax bite on it, but they would not let me. There are multiple out sites that don’t charge like GFM, and don’t have “selective” standards.

The gold standard is GiveSendGo. They take NOTHING out and depend on “love offerings’ (tips) from donors. Why look further?

My cousin died and they setup a GoFundMe for his funeral. I said F’ no. Donated to the funeral home direct. Those pole smokers will never see a penny of my hard earned money.

Don’t support Go Fund Me. Remember that GFM gets some of the cash, so sending money to them is funding an organization that clearly wants you dead or enslaved. Nor has GFM been reticent about funding violent domestic terrorist groups like BLM and Antifa that openly advocate genocide.

Several years ago I had a very public loss that made national news. People set up go fund me, Whoever it was never spent a dime on what they said the money was for. GFM also keeps a portion of the funds which also seems like the opposite of the need for the fund. I believe Give Send Go is a much better way to help. I don’t see a fund set up for him. If anyone finds a direct link I’d help. Love to use it to do a Sandman on the media too.

It was set up by his mother

His mother is going to be the mother of a very rich young man. And all the usual suspects are going to pay. It’s going to be very fun to see Joe Biden dragged into civil court.

Btw, VP Slut has chimed in, whoring herself as usual:

Kyle originally had an account at GSG. Immediately afterward, DiscoverCard suddenly found some mysterious “terms violations” with GSG and declared they would no longer process donations to GSG as a whole (documented here— be sure to follow the links in the comments to read the original Forbes article, now memory-holed). I ended my long relationship with the cowards at Discover at that time, and told them why.

Subsequently, Lin Wood (Sandmann’s libel lawyer) was hired by the Rittenhouses; he closed the GSG account and centralized all the fundraising at the FightBack Foundation. Then, as the result of a minor public scandal alleged against Wood, the Rittenhouses fired Wood and the Foundation both, and opened up their own website under their own control.

The feds will try to come after him on civil rights charges, he’ll also need funds for the upcoming private action civil law suits which I suspect are coming soon.

There are absolutely no federal issues at play in this case. And yet, if he ends up being indicted by Biden & Garland, I won’t be surprised particularly considering some of the comments that were made today by some pretty powerful Democrat legislators.. More importantly, Biden & Garland have EARNED the suspicion they’re both under, just ask the parents who were treated like terrorists.

The only thing Bradbury, Huxley and Orwell got wrong in their seminal works is their dystopian futures weren’t dystopian enough.

That, and not naming the govenment “IngWe’reNotSoc.”

Jerry Nadler wants the DOJ to find some, even if they have to be created out of thin air.

There are absolutely no federal issues at play in this case.

There were no state issues either. That didn’t prevent the unwarranted persecution we just witnessed.

Selective enforcement is just part of the double standards standard. Pay no attention to the agenda behind the curtain! Just move along.

We either are going to regulate these bleepholes in the right direction or the Democrats along with leftwing western European governments will be regulating them against us (i.e. more of this bs.)

Your comment confuses me. Are the bleepholes and the Democrats not one and the same?

Maybe Kyle should add GFM to the list of ‘people’ to sue.
Even if only for the fun of it.

Can’t says right in their TOS that you aren’t allowed to run a GFM fundraiser if the money is going to be used in defense of a violent crime. Any lawsuit would be quickly dismissed.

Yeah, the TOS says that now. Guess when that was added? And guess how defensible that TOS is if they routinely ignore it for leftist causes… for which we have plenty of receipts?

In my country, there is a presumption of innocence. What world does Zuck the Cuck live in?

It means a dead female (human or animal). Or it can mean the verb “died’, again in the feminine.

They won’t use the feds going after him with the Justice Department. They will do it with the Internal Revenue Service, and the various banking regulators. I would not be at all surprised to see his various funding accounts be frozen, and his parents uncles aunts and cousins having their taxes scrutinized within a gnat’s eyebrow.

Be sure to include tax consequences when calculating damages for the lawsuit.

Their fundamental position is “Guilty until proven innocent.”

Use the Christian-based, non-partisan givesendgo.com