Book Review: The End of America – 100 Days that Shook the World, by J.J. Sefton

Book Review: The End of America – 100 Days that Shook the World, by J.J. Sefton

I give it 5 starts out of 5 stars. And if you are a regular reader of Ace of Spades HQ, you will want to get this book to support their efforts and to remember the gems that were published during one of the most challenging periods in this nation’s history. 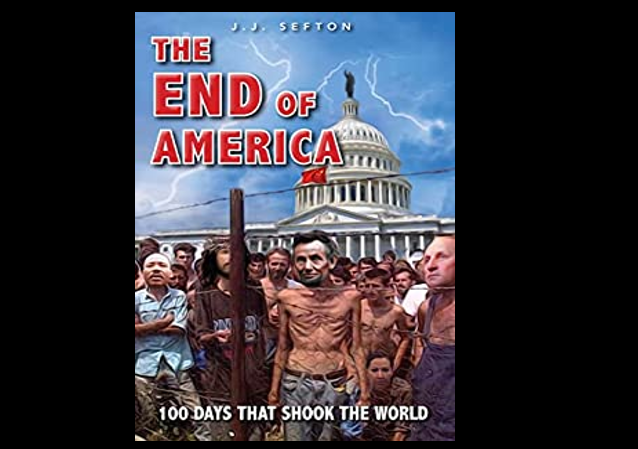 One of early morning internet stops is Ace of Spades HQ, which is one of the few sites I visit multiple times daily.

J.J. Sefton, the pen name for one of the many wonderful contributors to that blog, compiles “The Morning Report,” which is a collection of news links from around the country and the world. Sefton usually precedes the expansive compilation of items with his thoughts on people, events, and the state of this country and the world. His analysis is a superb blend of political insight, history, and humor.

Sefton has now prepared a compendium of his Morning Report essays from November 3 to February 10, 2021, entitled The End of America: 100 Days That Shook the World. His book a day-by-day journey into darkness that serves as a reminder of all the prosperity, freedom and security we have lost since Biden began his administration.

I must admit, this was a very challenging book for me to read. Not because of Sefton’s work (he is a dynamic and engaging writer). Rather, it is because of the pain and heartbreak I have endured covering the news since the plumbing began to leak late into the night in Georgia on Nov, 3, 2020.

Fortunately, for me, the recent election results in Virginia and New Jersey lifted my spirits in time for me to crack open this book!

I would like to share this snippet from January 7th, after the media deluged the public with incorrect information and distorted coverage of the demonstrations at the US Capitol in protest of many critical aspects of the 2020 election.

Year after year, election after election, we begged and pleaded with [the Republican] party to stop what is now inevitable and imminent from happening. I blame them for what happened yesterday. For what happened nine weeks ago. For what has happened to this country for the past 60 years by not opposing the overthrow of America as founded and going along to get along, either out of denial, greed or some combination of both.

Now there is talk of impeaching Trump, with just under two weeks left, which if successful would ban him for running for president again in 2024, as if any election ever again in this country, such as it is, is ever not going to be rigged by the Enemy. And this vile lout Corey Bush is introducing legislation to have those who moved to challenge the Electoral College expelled from office.

Looking beyond that, do you think that anyone who donated to Trump or to a Republican is not going to have that information leaked to potential employers, or banks or perhaps to the mostly peaceful protesters of Antifa and BLM who will know where you live?

Funny how city after city can burn to the ground as police either willingly or not stand by and let it happen and that was somehow justified. Yet here we are after a year of having our livelihoods as well as our freedoms destroyed on the pretext of a health crisis that was nothing more than a bad flu, and now our only legal and legitimate way to protest this, our sacred right to vote for which thousands of our soldiers, among them my uncle, died to preserve, stolen.

And those who had the power and the G-d damn duty to stop it not only abrogated that responsibility but turned around and flamed us for pointing it out and demanding they abide by it.

The End of America is an excellent primer for those of you who are unfamiliar with the Ace of Spades HQ Team. It is a must-have for any political library, as it details the roots if many of the poisonous policies that now involved into full fledged disasters for the Biden administration. There is much that is described in Sefton’s work that you may wish to forget, but clearly should not.

Sefton does not shy away from using strong language and visceral examples. If you are looking for a Peggy Noonan-like gentility to your political analysis, this is not that book. However, like a strong cup of coffee, this book will get your heart rate going and completely wake you up.

On a personal note: I was tempted to stop writing entirely after the 2020 Election. However, I decided my talents would be best used lifting up the Legal Insurrection team’s Critical Race Theory coverage.

Sefton is one of the reasons I stayed. It’s easy to quit. It’s harder to stay fighting. The End of America concludes:

Gradually, then all at once is how we got here. And I guess that’s the way we’ll ultimately get out of this. One by one. Be the revolution. One person. Then another and another and before you know
it you’re a force to be reckoned with.

Pollyanna-ish? Maybe. But if we’re going to wait around for the other guy to stick his neck out, we’re dead already.

I give it 5 starts out of 5 stars. And if you are a regular reader of Ace of Spades HQ, you will want to get this book to support their efforts and to remember the gems that were published during one of the most challenging periods in this nation’s history.

There are other things that should be lifting your spirits as well. The left is increasingly taking their red pills over Hillary’s Russiagate conspiracy and it is beginning to feel more and more like Rittenhouse will be found “not guilty” tomorrow.

Things are NOT going well at all for “Build Back Better” and everyone FJB is relying on to deliver victory knows they are circling the toilet including the GOP squishes. Now it’s a matter of making sure that the squishes are replaced by Trump loyalists who are certainly going to be clinging to coattails for dear life for the next 3 years.

The Marxists could certainly make up a reason to declare martial law and seem to be desperately gaslighting us for another “insurrection” but the natives are very restless. The insane insistence on 100% of us get jabbed just may be what tips the scales for us.

Now let’s hope the Republicans don’t again snatch defeat from the jaws of victory. My e-mail inbox is flooded every day with desperate pleas from the RNC, McConnell and the rest for money but they are clueless.

We are winning and Trump is peaking over the horizon planning his return.

Sounding a lot like Republicans the day after winning the 2010 elections.

First I am confident we will win the 2022 elections despite Trump.

But second Trump is polling 46% against Joe Biden during an inflation crises, and a labor participation collapse. 46% is better than Joe Biden’s 45% but I am not confident Trump will get that 50%+1. We should be shooting for a majority not plurality.

The thing to be red pilled about is Republicans are finally starting to use power that the voters give to them (see for example Oklahoma and Florida) and are starting to learn to speak in moral terms.

Here is the big opportunity:

Now how will Team McConnell/Romney manage to screw THIS up? They will if we keep coddling them and let them again wriggle off of our hook. We need to make them hurt really bad if this is going to work.

Team McConnell is telling people to vote Republican, team Trump is saying stay home so I think you have your people confused. If your message is “stolen election” your result is people stay home (see Georgia’s senate election).

Luckily Joe Manchin and Krysten Sinema are friendly with the Mitch McConnell wing which has saved us from a much worst defeat.

If Trump had not handed the senate to Democrats we would have done a lot better than we did.

The only folks In seeing people to stay home are you.

Vote, *and* demand transparent accountable elections. These are both requirements. Enforce them.

Thanks for the review of his book. It’s a must-buy.

Hopefully getting my copy as early as tomorrow.
JJ is a fantastic source for what’s out there daily

Ordered it.
Surprised it is available on Amazon.

We can vote with our checkbooks and refuse to support the establishment GOP. That does not mean they will not have millions to squander from big donors (undefined), but it will certainly cramp their contemptuous style.

Did get my copy today.
Here is link to JJ’s news
https://cutjibnewsletter.com/