“Contrary to many stories in the news, Ms. Stone-Manning was not an innocent bystander, nor was she a victim in this case. And she most certainly was not a hero” 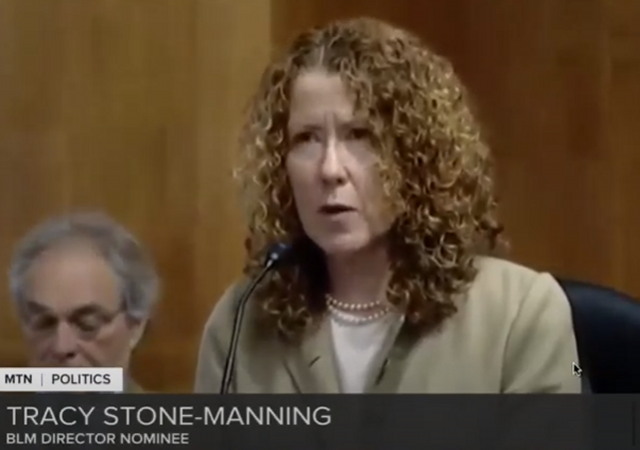 The Senate has confirmed Tracy Stone-Manning to lead the Bureau of Land Management on a party line vote. Republicans have been objecting to her nomination for months, due to her connection to an act of eco-terrorism, as well as her views on population control.

Senate Republicans also suspect that Stone-Manning will use her position to advance the left’s radical agenda on climate change.

A bitterly divided Senate late Thursday approved President Joe Biden’s choice to oversee vast government-owned lands in the West, despite Republican complaints that she is an “eco-terrorist.″

Republicans sharply criticized her nomination during an often acrimonious Senate debate, with several holding up a metal spike similar to one used in a 1989 environmental sabotage case.

Democrats defended Stone-Manning, noting she was never charged with a crime and in fact testified against two men who were convicted of spiking trees to sabotage a timber sale in Idaho’s Clearwater National Forest.

Wyoming Sen. John Barrasso, the top Republican on the Senate Energy and Natural Resources Committee, called Stone-Manning a “dangerous choice to be put in charge of our public lands″ and said she ”continues to hold very dangerous views” against oil and gas drilling, logging and other commercial activity on federal lands.

Democrats have been shrieking about extremists since January, but Stone-Manning has gotten a total pass for her past behavior. She is far from innocent.

Tristan Justice writes at The Federalist:

While Democrats framed Stone-Manning’s immunity deal and subsequent cooperation in the case as heroic to shepherd along her nomination, new details emerged from the primary investigator on the case to reveal Stone-Manning as anything but cooperative.

“Contrary to many stories in the news, Ms. Stone-Manning was not an innocent bystander, nor was she a victim in this case. And she most certainly was not a hero,” wrote Special Agent Michael Merkley in a July letter to the Senate Energy and Natural Resources Committee.

“She was vulgar, antagonistic and extremely anti-government,” Merkley added, calling her “extremely difficult to work with” and “the nastiest of suspects.”

The nominee’s trial in committee was made all the more complicated by her claim to have never been the subject of a government investigation. When asked in a standard questionnaire whether she had “ever been investigated, arrested, charged by any federal, state, or local law enforcement authority for the violation of any federal, state, or local law, regulation, or ordinance, other than a minor traffic offense,” Stone-Manning wrote no.

Biden has made some awful appointments, but Stone-Manning is one of the most radical ones so far.

I mean WTF this is a CRIMINAL!!!

Of course she is. They don’t nominate honest people.

So is the current occupant of the WH.

Five republicans missed the vote ! Republicans suck and are nearly as bad as Democrats. Our country is doomed if we don’t clean house in Washington DC. !

I am sure there would have been sufficient Republican votes had they been needed. The “Big Kabuki” has never been bigger:

Note that once again, Cornyn (TX) is one of the Romney gang.

It’s the McConnell-led Republicans who are saving that $6.5T (yes, that is the correct amount) US economy swamping boondoggle. It’s Trump and us vs the world.

Five GOP Senators didn’t bother to vote to force Heels-Up to go to the Capitol building and cast the deciding vote.

Shows how much the lazy clowns care.

What? And miss tee-time?

SUPER disappointed in Rand Paul.
Many of the other names are The Usual Suspects.

I agree with this. She needs to be on the record since she is likely running in ’24.

Perhaps that is why the “Republicans” missed the vote — to protect her. I assume these eGOP are smart enough to know what they are doing. The pattern reveals their agenda.

Exactly. It really does matter and that is a big reason why we always lose. No killer instinct. And we always, always, always make excuses and let the GOP squishes off the hook. It really sucks being us in the big moments.

You can add McConnell doing an “Ole!” on the spending cap to avert a government “shutdown”. Why? At least let them twist in the wind for a few days and use it as further leverage to kill ALL of the reconciliation bills. Even that $1.5T one that McConnell and and so many Republicans want so bad.

Typical Republicans, stepping in to finish the job for the Democrats when they get in trouble. I don’t trust any of them.

Wouldn’t have mattered; they would have had Harris break a 50-50 tie.

As long as there is a 50-50 Senate with Harris available to break ties, you’re going to continue seeing extreme nominees.

Quite literally; putting the inmate in charge of the institution. Surely the Democrat party could find someone who has not committed felonies!?!

Come on now! Be reasonable.

You mean a Republican? I don’t think that’s the way it works.

their can be only one intent for such an appointment–control

Am I to understand that she lied on the questionnaire she had to fill out for the Senate hearing? Isn’t that a crime?

Will it matter if she did?

‘What difference, at this point, does it make?’

Well, the only observation I will make is that this terrorist’s appointment and confirmation are consistent with the vile Dhimmi-crats’ perpetual and indefensible veneration, lionization of and general canonization of criminals, illegal aliens and Muslim supremacists/terrorists. Now, we can add a new sub-classification of criminal and terrorist to that list.

“She was vulgar, antagonistic and extremely anti-government,” [Special Agent] Merkley added, calling her “extremely difficult to work with” and “the nastiest of suspects.”
———

What a piece of work — a true narcissist and sociopath. Happy to maim, disable and even kill loggers trying to make an honest living. The vile Dhimmi-crats are utterly despicable and evil.

I had to make a second observation. 🙂

“She was vulgar, antagonistic and extremely anti-government,”

Yeah and that was her good side.

Webster’s now has a new illustration for the term “hatchet-faced.”

“Later in the letter, Merkley detailed his experience working with Stone-Manning during the investigation, calling her the “nastiest of the suspects.”

“She was vulgar, antagonistic and extremely anti-government. She was very uncooperative and refused to provide the hair, hand writing exemplars, and fingerprints as ordered by the federal grand jury,” Merkley said. “It was not until after we informed her that she would be arrested if she did not comply with the subpoena that she reluctantly provided those samples to me. However, she refused to answer any of my other questions.”

Merkley said he eventually learned later in the investigation that Stone-Manning knew all along “who had perpetrated the crimes in the Clearwater National Forest” and said she only came forward in 1993 to give up her co-conspirators in the tree-spiking case “after her attorney struck the immunity deal, and not before she was caught.” He continued, “At no time did she come forward of her own volition, and she was never entirely forthcoming.”

Merkley concluded the letter by talking about his experience investigating Earth First! and said it led him to retire early in 1997 because he started receiving death threats from the ecoterrorist organization and he was “made aware that they had solicited a contract to kill me and harm my family.” He said he is still “concerned” what the group could do to him and his family.”

Definitely, a strong Dem Party member. Non-terrorists need not apply. The more violent the crime, the more solid the credentials.

Imagine the Dhimmi-crats’ and their media lapdogs’ histrionics and outrage, if the GOP had been stupid enough and sufficiently morally bankrupt to nominate a terrorist with even one-quarter of the amount of baggage that this terrorist has on her résumé.

Up next, the communist nominated to be in charge of our banks and currency. Because communists know best about banking and currencies.

Time to start calling the radical left-wing Dems running our country what they are. They are American Communists. People who think Marx, Lenin, and Mao had basically the right ideas but made mistakes. Mistakes they won’t make as they deliberately destroy America so they can ‘build it back better’ using their new and improved version of communism.

I live in the west and own a 4-wheel drive vehicle, as do several of my friends.

Most of BLM land is desert-like, with almost no water and of very little commercial value.

Nevertheless, when suitably equipped, it is fun and inexpensive to go exploring on BLM land. You can generally go anywhere but there are no services, such as toilets.

BLM land is considered “multi-use”, so that motor vehicles are allowed. My biggest concern is that this appointee will forbid motor vehicles, leaving only hiking, biking, and equestrian access.

I have ask just how cozy is the National Wildlife Federation with the current administration and elected officials? Are we to expect more persons from their ranks being put in high positions in charge of land use policies?

Was Merkley invited to testify before the committee? If not, why not?

The Republicans could actually do something if they wanted to. Instead, they make meaningless noise and we give them a pass like they are helpless children. They deliver excuses and acting as they continue to sell out the country.