“It is unreasonable, invasive, and unsafe to force our restaurant associates to segregate customers into those who may be served and those who may not, whether based on the documentation they carry, or any other reason.” 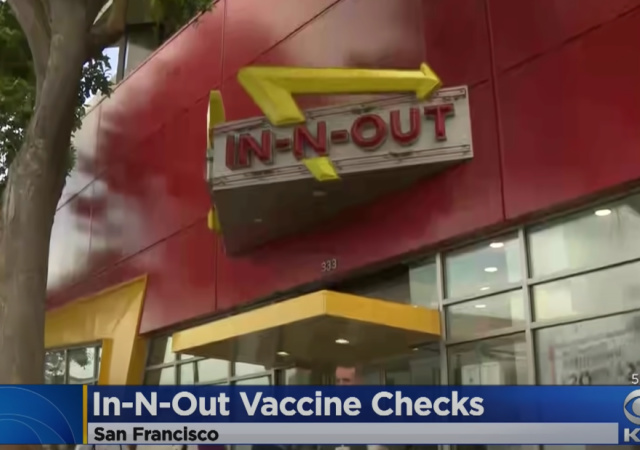 San Francisco made a huge mistake shutting down In-N-Out at Fisherman’s Wharf, a popular tourist destination by the Golden Gate bridge.

It’s the only In-N-Out in San Francisco. It gets chilly over there, but the restaurant can only offer outdoor dining.

The In-N-Out location refuses to check vaccination cards before allowing customers into the building.

San Francisco, which requires all businesses to check the cards, shutdown In-N-Out on October 14:

“We refuse to become the vaccination police for any government,” In-N-Out’s Chief Legal and Business Officer Arnie Wensinger said in a statement. “It is unreasonable, invasive, and unsafe to force our restaurant associates to segregate customers into those who may be served and those who may not, whether based on the documentation they carry, or any other reason.”

Think about it. It’s the only In-N-Out in San Francisco. Have you had In-N-Out? I think Whataburger is better, but In-N-Out burgers are delicious and addicting.

Imagine how the people will react without their In-N-Out.

The health department came down on In-N-Out when someone who has no positivity in their life called the 311 service center line.

Officials investigated In-N-Out on September 24 and October 6. The burger palace refused to enforce the mandate.

Finally. A national chain that acts like it has a pair.

And not one I would have predicted.
I’m assuming SF has absolutely no Chik-Fil-As at all.

Chik-fil-A bowed the knee to social justice a while ago. BLM.

I never thought much of their food in the first place, so didn’t go often. When “corporate” dived into BLM and even suggested that – maybe – i shine a black man’s shoes, that was the clincher.

I have noted a drop in traffic at their location here in town. Good.

“I never thought much of their food in the first place” That’s because there’s no fast food hamburger comparable to a well-packed picnic basket.

I’ve been patronizing a small chicken chain called PDQ instead. Don’t have any Bojangles locations in S Florida, they’re all in N Florida.

They reopened with no dine in option.

When Corporations are starting to dance we need to dance with them.

I think so too… but examples like WalMart, Chik-Fil-A, Fox News, and Smith & Wesson have proven to us that at any moment, a corporation can suddenly break into a hokey wokey and leave you on the dance floor with nuthin’ but your thang in your hand.

I really wonder, how much of this is window dressing? Have the training, and then end it and nothing more takes place. Meantime all of the trouble making reverends and other people calm down because corporation a did their bidding.

They have crime- and disease-ridden homeless camps, people crapping and peeing on public sidewalks, used drug paraphernalia in public spaces, and they’re going to hassle a fast-food place for not playing vax Gestapo? Make the city prove In-N-Out poses a “threat to public health” at all and these others don’t.

Ya wanna know why SF is a cesspool?

Read the comments on this SF newspaper’s article about the temporary closing of In-N-Out. Braindead little robots.

And this is why we may eventually see a red/blue split. These people just cannot abide anyone with a different opinion, and they are happy to use the force of government to make everyone comply. Ironic that it is so prevalent in SF of all places, the center of the 60s counter culture, free love, live and let live, do your own thing, etc. Now it is “vee have vays of making you comply”.

they are happy to use the force of government . . .

They are THRILLED to use the force of government against their neighbors period.

My first job after high school was in The City. Dressed up every day in a dress, heels, gloves to go to work. The city was spotless. Now? I fled CA in 2011.

You describe the way you dressed. I have to confess something: I took a look at your username to make sure that you weren’t in fact a man. After all, this is San Francisco were talking about! I’m glad you found your way out. I left California for the last Time in 2005. I have a short my neighbors that I left it in my rearview mirror, and did not bring it with me.

“These people just cannot abide anyone with a different opinion”

That’s why the red/blue split won’t work. Reds can abide people with a different opinion, so unless they are utterly ruthless, which is generally against their nature, and absolutely forbid voting by anybody from a blue area or their children the blues will eventually try to take over.

It’s the city newspaper. Of course they’re going to play stenographer and echo chamber for City Hall. Any comments that might have been supportive of In-N-Out, or critical of City Hall, will be edited out. We all recognize that. It was that way when I was stationed at the Presidio back in the mid-80s when Diane Feinstein was just a corrupt mayor.

That was a frightening visit to wacko land. But a good illustration of how humans reactions feed off of each other when they are disgruntled or frightened. They started with “well I’m not going to eat there anymore” and end with “they (In N Out) obviously are not following health ordinances and people will die”. Smh

Been to that location multiple times. Yum!

Nice to see business deciding they don’t need to put up with some of this.

Good for IN-N-OUT, Great burgers and even greater business values.

To get to the nearest Whataburger from here we have to drive all the way across Arizona.

The Supreme Court is going to have to make a fucking ruling, and SOON. Roberts the Coward should have issued an injunction months ago.

Oh please, Roberts and the SCOTUS are compromised all the way. What do you think all that democrat, “We’re going to pack the court with liberal justices if you don’t do what we demand.” crap was all about. It wasn’t about actually packing the court with liberals. It was all about intimidating the court. And since Roberts is more concerned about his “legacy” than maintaining the independence and integrity of the court he will do whatever the democrats want and demand. And that’s the truth.

Roberts will define the mandate as a “tax” and therefore find that it is constitutional.

They should punk SF and demand to see your HEP vaccination cards too. That’ll keep the junkies out.

I never knew that was a thing.

Name anything that any government anywhere in the universe has done for sentient beings as much as The Animal Style burgers have done.

I used to stop in at Whataburger once a year for a hatch pepper burger but that was enough to tide me over till the next year. In and out or 5 guys beat the heck out them.

The Hatch chili cheeseburgers at Blake’s Lotaburger were pretty good, but they’re all the way over in El Paso (and of course all over New Mexico). Much better than the hatch burger at Whataburger.

True. Lived in El Paso for ten years and ended up just buying fresh roasted hatch and making my own burgers at home.

Meanwhile, back in San Francisco…

I could print out a fake vaccine card in about 30 seconds, fill it in so it looked credible and use it to walk into a restaurant in SF. And the dumbasses around me would all smugly sip their drinks, knowing the city has protected them.

Those people are stupid. They can’t be reasoned with, their minds, what little is left of them, will never be opened.

And yet all these folks had parents that taught them right from wrong???WE continue to see that this has been the plan for a very long time. If we follow the movement of society we see that once a way was found for Family to have no importance and all that means* Once those plans put in place the little “unimportant” “not enough to argue about” “just get along” tiny steps to the cliff*we have just followed along because we continue to have new foundations of what is acceptable behavior what is acceptable level of corruption what is acceptable for me not you…When we continue to follow the masses instead of learn from history. The very pillars that build American Greatness no longer have their firm foundation—here we are.