NEA-RI says it was forced to sue Solas and her husband in order to sue the school district to prevent release of records. But NEA-RI had no standing to inject itself into the public records process under clear Rhode Island law, so that defense is a distraction. 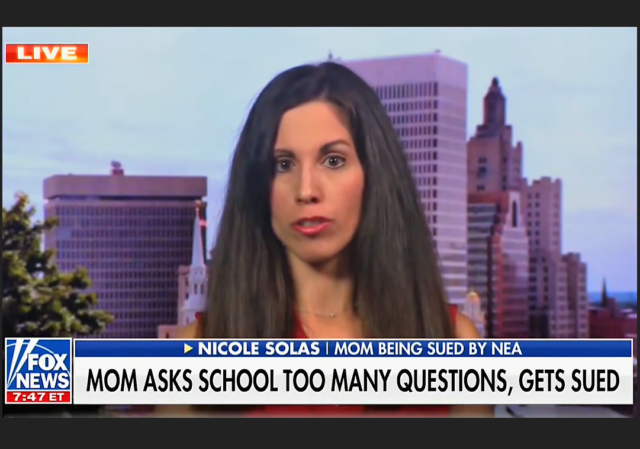 A long, long time ago
I can still remember
When the union sued Nicole Solas
And now she wants to make them pay.

Perhaps you remember too.

Short version, after dropping its motion for emergency injunctive relief to prevent release of public records requested by Solas and her husband (because the union was going to lose), NEA-RI still faced Solas’ Motion for Summary Judgment on her suit under the Rhode Island anti-SLAPP statute:

This lawsuit is an unprecedented attempt to enjoin the statutory public records process and stop citizens from seeking public information in good faith about the operations 0f their government. This extraordinary case is brought by a party without standing, disregards the entire statutory scheme under the Access to Public Records Act (“APRA”), R.I. Gen. Laws § 38-2-1, et seq., and is an affront to Parents’ rights to open and transparent government under the APRA, the anti-SLAPP statute, and the United States and Rhode Island Constitutions.

Judgment should be entered in favor of Parents on the grounds that Plaintiffs lack standing and that Parents are immune from suit under R.I. Gen. Laws § 9-33-2. In addition, the Court should award Parents costs and reasonable attorney fees for having to defend this action. This matter should be left open only for limited discovery t0 ascertain whether damages should be awarded under § 9-33-2(d) against Plaintiffs for bringing a frivolous action for the purpose 0f harassing Parents and inhibiting their statutory and constitutional rights, as set out in Defendants’ concurrently filed Motion for Limited Discovery.

NEA has now filed its Objection and Memorandum in Opposition:

The Plaintiffs, National Education Association Rhode Island (“NEAR!”) and National Education Association – South Kingstown (“NEASK”) ( collectively referred to as “NEA” or the “Union”) hereby submit the following memorandum of law in support of their Objection to Motion for Summary Judgment submitted by Defendants Nicole Solas and Adam Hartman (hereinafter “Requestors”). 1 Because the Union has standing to pursue this action against the South Kingstown School Committee (“School Department”) and the Requestors as they were parties required to be included under the Uniform Declaratory Judgments Act (“UDJA”), G.L. 1956 § 9-30-1 et seq .. the Motion must be denied. The Requestors’ motion pursuant to the Strategic Litigation Against Public Participation (“SLAPP”) statute, G.L. 1956 § 9-33-1 et seq. also fails for a number of reasons including the fact that the defense is inapplicable when the Union was required to join Requestors pursuant to the UDJA and has no claim against Requestors for liability. Thus, whether the anti-SLAPP defense is available is a moot issue because there is no claim for liability to which conditional immunity could even apply. Finally, even if the anti-SLAPP defense were procedurally available, there are material disputes of fact that would preclude resolution of the applicability of that defense as a matter of law at this stage.

You can read the whole thing. The short version is we were forced to sue Solas and her husband in order to sue the school district.

Umm, but there was no basis for NEA-RI to sue the school district either. That’s the point. NEA-RI had no standing to inject itself into the public records process under clear Rhode Island Supreme Court precedent. Additionally, there was no factual basis for the union claim that the school district might produce personal materials about teachers that were not covered by the public records law.

So the NEA-RI, which had a documented hostility to Solas, ran into court without a legal or factual basis. I don’t predict outcomes — all that needs to happen for Solas to lose the motion is for the court to find disputed issues of material fact, in which case the lawsuit would still move forward, there just wouldn’t be a quick resolution.

But this case seems to fit the anti-SLAPP statutory terms and purpose.

Bullies are not prepared to get punched back.

Ask anybody who’s spent time in a school.

Far and away the most complaints to teachers/school staff are BY THE BULLIES using the system to further harass their victims.

Most bullies have perfected the art of pretending to be victims to authority.

Indeed, the entire Woke movement is characterized by this.
Dave Chappelle explicitly pointed it out in his last special:
“You can’t be the victim AND the bully.”
Needless to say, the woke are enraged.
(Well, find me a day when the woke aren’t enraged.)

“…find me a day when the woke aren’t enraged.”
True, but there are days when they are more enraged than usual.

If the School Committee was certain that the curriculum was above board they would simply release the teachers study guides, and their training modules. So, one can only conclude that CRT goes way beyond simply teaching Children to “love thy neighbor”. It has made a radical turn into, “hate thy self!”

The woman on the board should be sued for calling parents racists, simply because they demand to know what the school is “teaching” their kids. I would definitely challenge the immunity protection, on the grounds that publicly calling parents Racists would be outside of the scope of her duties as an elected member of the committee.

It is she who is the racist, and a pathetic one to boot!

Is there any chance of recalling the school board and ousting the superintendent?

Her next case should be to sue the School Board and the public relations firm who drafted the school board’s public smear of Nicole Solas. I hope she gets big $$$’s.

Be careful what you wish for. Has the school district moved to dismiss the complaint on the same grounds as Solas? Once Solas is out, the NEA-RI and the district can settle, putting whatever rules into place that they want. I don’t want to see Solas have to go through this legal battle, but I think her dismissal should be conditioned on dismissal of the entire suit.

Not predicting outcomes isn’t just for legal professors…. it’s for those of us who no longer believe the courts work.

If I learned anything from the Chauvin trial and the entire year of 2020 its that laws don’t really matter anymore; it’s who holds the monopoly of violence or sanctioned violence in the case of antifa/BLM.

Best defense is a good offense they say.

“We didn’t WANT To Sue Her, We Had To Do It” – Fearless leader Soros demanded that we do it.

It does sound suspiciously like, “See what you made me do?”

Judge Smails “ I’ve sentenced boys younger than you to the gas chamber. Didn’t want to do it – felt I owed it to them.”

Just wait til money from the fed gets withheld because of refusal of CRT curricula. That starts the ugly time.

Most states have sunshine laws of some type. USE THEM.

I am pretty sceptical that excuse is going to wash. They had no standing to attempt to intervene. They may have felt they had no option but a hail Mary but that doesn’t justify the action.

So the Solis’ prevail hands down. Good luck getting the documents they seek without having to go to court again and again and again. When they prevail, can the bench order that failure by the district to promptly comply will result in some manner of enforceable action.