“We want our children to be kept safe. Those individuals, woke politicians and others, are not speaking for us. Many of them do not even live in our communities.” 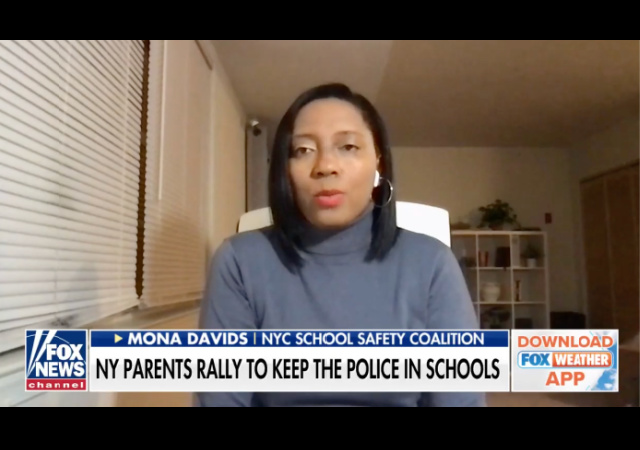 New York City parents formed the NYC School Safety Coalition after Mayor Bill de Blasio decided to put the Education Department in charge of the school safety agents instead of the NYPD.

De Blasio did not make the decision based on qualifications or safety. It has all to do with the “protests against racist police violence” last summer.

The parents made their voices louder “after authorities recovered five guns in two days at schools.” School safety agents recovered the guns in Queens, Brooklyn, and the Bronx.

The city has seen a major increase in school guns in the past three years:

Between July 1 and October 17 of this year, before the recent rash of gun seizures, three firearms were recovered in city schools, compared to one each during the same period in 2019 and 2018, according to NYPD statistics. The five guns found this week bring this school year’s total to eight.

Mona Davids, a member of the coalition, criticized de Blasio and “woke politicians” for putting their children in danger:

MONA DAVIDS: No, I am certainly not a person of privilege, and those individuals do not speak for the majority of parents here in New York City. We want our children to be kept safe. Those individuals, woke politicians and others, are not speaking for us. Many of them do not even live in our communities. So as far as we’re concerned, we know what’s in the best interest of our children and the best interest is school safety agents remaining under the purview of the NYPD. And as a matter of fact, we need more school safety agents because we have a shortage of almost 1,500 school safety agents. That’s number one.

But those woke politicians and parents have been pushing the city to either make the Education Department supervise the agents or get rid of them. They want the schools to use the funds to pay for “social workers and counselors, arguing that police presence disproportionately harms students of color.”

De Blasio promised to implement the plan by June 2022. He will be out of office by then so the new mayor would have to sort out all the details and deal with the growing pains.

Some doubt former police captain Eric Adams, who will likely become the next mayor, will finish de Blasio’s plan or scrap all the safety agents:

“A new mayor might not want to do any of it,” said NeQuan McLean, president of the local parent council in Brooklyn’s District 16, who supports the transition. McLean’s Bedford-Stuyvesant council held a town hall meeting on the issue in April where education department officials offered few details about how the transition would work.

There’s good reason to suspect Adams, a former police captain, might be skeptical of de Blasio’s transition plan. During the campaign, he argued against removing school safety agents and pushed back against calls for sweeping reform of the school safety division, though he said there should not be a “police culture” in schools. (Spokespeople for the Adams campaign didn’t respond to questions about whether he would move forward with the transition of the school safety division to the education department.)

Those who want to keep the agents do not think the education department does not have the resources to handle the school safety division and pointed out its bad track record supervising school safety.

Polls show that students, teachers, and staff like having the agents. The positive polls include schools with a large black population.

Gun abuse on a small scale (hundreds, thousands more by government agents, criminals, and self-abortionists); and scalpels, in their many forms, on an unprecedented scale in a bid for violence without borders.

Did New Yorkers really vote this oaf in twice, or did ‘voting machines’ rig the elections?

Used to be said: “Hair color so natural only the hairdresser knows for sure”

Now we say: “Voting results so natural only the computer operator knows for sure.”

It’s simple. If a kid knows that if he is caught in school with a gun he is going to spend the next ten years polishing Bubba’s cock in prison, he won’t bring a gun to school. But today’s progressives don’t want to throw away the key to the jail cell, they want to throw away the jail. Brace yourselves for the worse.

To your point, my son graduated from a country school 8 years ago. When a classmate brought a pistol to school, my son did the right thing and told the Administration. The offender had an Uncle at Central Office. He received In School Suspension (ISS) and they told him who turned him in.

My high school had a rifle team. Rifles on school bus, rifles in lockers, meets home and away with other high schools. Nobody gave it a thought.

I remember when Teacher and Principals all bitched that Parents were not involved enough with their children’s schools.

“Involved” is often a euphemism for “make your kid do what I want at home”.

Hey, you know what’s missing from this narrative?
Ghooooost guns! (Wooooooo!)
What about the serial numbers on the guns found? Or are they all “ghooooost guns?”
Because a gun with a serial number helps police determine quickly where a crime gun originated and who it belongs to. We know this because The State keeps telling us so! This is why all guns having serial numbers is so crucial!
So tell us quickly, New York — who owned these guns you found? Who are the criminals?
If you can’t tell us that, then I guess your narrative that “serial numbers are crucial for crime-solving” is just so much more horseshit state narrative, designed only as a transparent excuse to oppress the 100% legal personal manufacture of firearms by “free” Americans.

Sounds like New Yorkers know what is needed and the mayor doesn’t know diddly squat.

She acts as if these “school safety agents” will be more competent under the Police Department. Does she have any idea how many NYC police have shot innocent bystanders or have missed the perpetrator at extremely close range? Does she know how many have accidentally left their weapons somewhere?

You might want to deputize the kids bringing guns to school, instead.

But the school wants sanctioned violence… just like a prison.