National School Board Assoc. Backs Down: “We Regret and Apologize For The Letter” To FBI Targeting Parent Protesters

National School Board Assoc. Backs Down: “We Regret and Apologize For The Letter” To FBI Targeting Parent Protesters

NSBA compared parent protesters to domestic terrorists, but now says: “there is no justification for some of the language used in the letter” 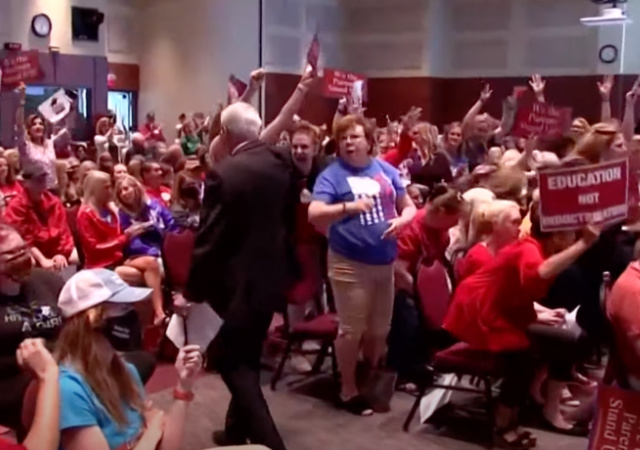 The National School Board Association is under intense pressure bordering on a revolt among its members after the NSBA letter to the Department of Justice demanding federal law enforcement action against parent protesters. That letter was the excuse used by DOJ to organize law enforcement monitoring and possible action. Attorney General Merrick Garland defended his reliance on the NSBA letter in testimony to Congress.

NSBA has just issued an apology.

AG #Garland must immediately reverse the FBI’s targeting of parents as “domestic terrorists” – an unconstitutional policy that the AG himself stated was directed in response to the original letter that NSBA is now apologizing for.

If nobody resigns or gets fired, then this is just them spewing an empty bullshit ‘apology’ in an attempt to deflect the outcry before they go right back to doing it again.

When does that fascist at DOJ apologize?

Yeah, basically this was an apology to the members; State and Local School Boards for the Nat org acting without any input. It didn’t retract the theme of the initial letter to DoJ.

The language is still suboptimal ‘the voices of Parents should and must be heard’ when decisions are made about children. Come on. This casts parents as another mere stakeholder in the process. The fact is the teachers, admin and the school board are the employees of the taxpayers; parents and other community members.

These folks truly don’t understand that. They believe that their BS pedagogy training/certification places them in position to simply endure the comments and input of the taxpayers before implementing the agenda v listening, modifying or eliminating policy agenda based upon the input from the community.

IOW, they believe they are the masters and not our public servants.

The problem is, their apology will be accepted. We need to learn from the communists, no apology is good enough and use that to keep them on their back foot and defensive for an extended period.

If by “resigns or gets fired” you mean “gets rewarded or promoted”, yes!

These woke terrorists need need to be treated as they treat the patriots that stand up to them: canceled, socially ostracized, forced into bankruptcy, denied access to banks, jobs and the internet, serve jail time for some bogus legal charge, and then serve lengthy prison time.

“We have always been in favor of Voter ID.”

“I was for it before I was against it.”

“We have never advocated defunding the police.”

“Nobody is going to take away your guns.”

“We will never support vaccine mandates.”

“Oceana has always been at war with Euras-, ah, Eastasia.”

Ouch! Still paying through the nose for that one.

Over this weekend, I will attempt to more fully understand the corporate structure and tax exempt status of the organization which issued the political advocacy letter to the DOJ. Perhaps others will conduct their own investigation.

501(c)(3)s are not allowed to engage in partisan politics; that means advocating that people vote for or against any specific candidate. The infamous letter was not of a partisan political nature, so it doesn’t conflict with the organization’s status.

Damage control, big time. Problem is, in their rush to a police state, they let the cat out of the bag. Too smart for their own good, thankfully.

This is a sound victory. We can’t rest on our laurels however.

Learn something from the enemy for a change. Don’t accept the apology and keep them apologizing and defensive for an extended period.

The point isn’t accepting the apology, the point is that it is a big victory for them to have felt the kind of pressure to be forced to issue an apology. The fight isn’t over and we shouldn’t pretend it is but this is a much better indicator than polls that the public is with us which I would call a victory.

Well, no, actually, it’s not a victory. They are trying to save their grift as their school boards across the country condemn them and some even quit. They also seriously angered their board members by forging ahead with this horrific (Obama) Biden WH scheme without any input from the board members themselves:

Read the emails at the bottom of the post. Even the majority of the NSBA were horrified by the letter. As they should be.

Fuzzy: appreciate the link. Now then, in the coming days, either these board members or the leadership that wrote that letter must go. If neither set of people resign, then we shall know that this ‘apology’ has been a con.

An apology without consequence is not an apology. Words in a letter are fine, and this letter is better than most. But there must be a reckoning or it’s a hollow apology.

Perhaps you or another LI writer could check back on these folks in a month.

We’re on it, no worries. I do think we need a full post detailing the timeline and including the emails I linked and the apology, but I’m not sure that will happen. Even if it doesn’t, though, we’ll be keeping LI readers in the know. 🙂

If you will it is a great victory if the public pressure against them is such that they are forced to back down from their position.

It is a much more reliable indication than poll numbers that despite how it feels we are not alone the public is with us on education issues and the Democrats partisan show of force can be stopped.

We know what the organization actually thinks (the letter they sent) but this trying to weasel out of consequences shows what the public think which I think qualifies as a victory, but not one that could or should allow us to rest.

The hell with these ‘apologies’, and carry on as usual.

Heads must roll. Malignant organizations must be destroyed.

Apology not accepted, azzholes. Nothing short of mass seppuku by your entire top and middle management will suffice.

Seriously, don’t want to be the left’s counter punch but if this were done by anyone on the right, it would be resignation and firing and life destroying “protest” time.

Maybe it is just me, but I am a cynical bugger. I read their letter. It says mistakes were made, but NOWHERE does it retract the specific concept of parents as “domestic terrorists”. That is a generalize apology that leave intact the concept that they will use to attack parents.

I see an apology for the language in the letter, not for the unauthorized action, nor the action, itself.

If the NSBA Board cannot manage the firings, the organization must be dissolved.

Garland needs to go, too.

Too late. Add one more thing for parents to protest at school board meetings. Ask them if they pay dues to the NSBA and if so demand they stop. Why is there such a group anyways?

I find it amusing that some Board members are whining about what they see as co-ordinated responses by parents. The school boards have been engaged in a co-ordinated effort to act against what the parents see as the best interests of the students. They are all doing the same thing, and getting the same blowback.

Is nobody considering that they may have been taking actions that are against the best interests of the school children? That they are wrong, and the collective roar of disapproval is well-founded?

Shucks, I can regret not having had a Reuben sandwich for lunch yesterday, but that doesn’t mean I’m sorry I opted for a Big Mac instead.

Extinguish that ministry of hate. They meant exactly what they asked for and likely had to suppress the venom intended against non patrons of their socialist doctrine.

We need a list of all remaining subscribers/members for every community in America such that they may be observed, carefully and cautiously..

Get the goddamned federal government out of your childrens lives.

The only thing they’re sorry about is it didn’t work out as they had hoped.

Next time they’ll make sure their letter doesn’t see the light of day. Next time they’ll be less ham-handed and more subtle and sophisticated in trying to use federal LE to silence, persecute, and prosecute their political enemies.

The Left will not stop trying to do this. The Marxists will continue to try to use The Patriot Act against their political enemies. And sometimes they will succeed.

The Patriot Act must be repealed. ‘Our’ government has demonstrated it cannot be trusted with this power.

Republican Governor’s should cut an executive order banning participation with and dues to, the NASB. If it’s a blue state and a conservative county, that county should take the same action. The only way to be rid of this organization is to defund it.

The NSBA regrets only the fact that the letter went public. The regret then extends to the wording used in the letter. Nowhere do they say that they were wrong in pushing an un-American, racist agenda in the schools and keeping it away from the eyes of the parents, and the public.

They will issue all kinds of regrets and apologies while they continue pushing the agenda, but in a much more circumspect way. They will do that to prevent future blow-ups, not because it was, in total, a wrong thing to do.

NSBA is just another government-lobbying-itself grift. Education is a state and local responsibility and there is no justification for a national organization.

Raze it and sow the ground with salt.

Sounds like a typical proggie “apology” to me. They apologize for some of the language in the letter? No, assholes, the entire letter and the underlying motivation for writing it are anti-American and disgusting. Anyone remotely associated with writing that letter should resign immediately.

At what point does this become a conspiracy to deprive right under the color of law?

They admit “mistakes were made”. Considering how Merrick Garland called people exercising First Amendment rights re an issue very close to their own interests a bunch of “domestic terrorists”, I wonder if the mistake they privately admit in their own circles was not organizing death squads and secret prisons before speaking. The DOJ needs to be turned inside out before it becomes the Guo An Bu.

THEY’RE ONLY SORRY BECAUSE THEIR PLAN BACKFIRED

By going after parents – they opened a Pandora’s Box or Trouble.

They still want to implement their Neo-Racist Agenda. They will just be more sneaky than usual next time.

So who chartered the NSBA to conduct any type of oversight and who funds their operations? Since local school boards conduct oversight over local schools I see no reason to have a national level oversight board of any type. It’s time to make them go away. They never should have existed in the first place.

Biden Admin Taps School Board Association Honcho For Post In Wake Of Infamous Letter
CHUCK ROSS OCT 25, 2021 3:30 PM
The Department of Education earlier this month tapped the president of the National School Board Association to serve on a federal board that tracks student progress, the latest indication of the Biden administration’s collaboration with the group that compared parents to domestic terrorists.

Mission accomplished. The letter served its purpose, here’s the payoff.