Tehran vows to “oppose the process of normalization of ties” between Israel and Arab states that began with President Donald Trump-brokered Abraham Accords. 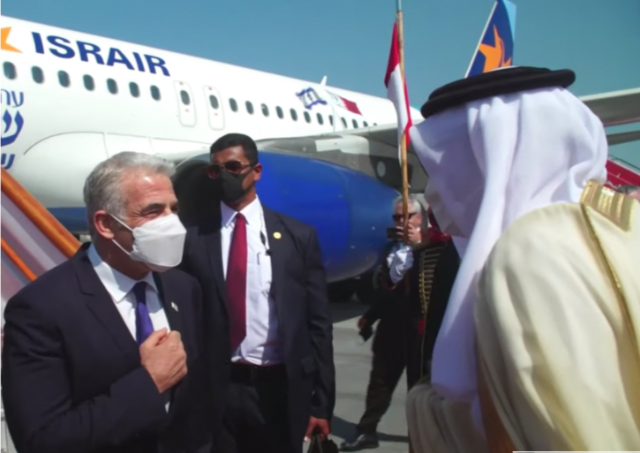 The Iranian regime is angered by Israeli Foreign Minister’s landmark visit to the Gulf Arab state of Bahrain. Tehran accused Bahrain of bolstering “Israel’s destructive presence in the region” and vowed to “oppose the process of normalization of ties with the Zionist regime.”

The visit by Israel’s Foreign Minister Yair Lapid to the Arab kingdom of Bahrain comes as both countries mark the one-year anniversary of the Abraham Accords, the historic peace agreements brokered by former U.S. President Donald Trump that established diplomatic relations between Israel and Arab countries.

Enraged by Israel’s growing ties with neighboring Arab and Muslim countries which began under President Trump’s watch, Iran on Friday launched “war games” along its northern border, the Reuters disclosed.

Iran said Friday that the visit by Foreign Minister Yair Lapid to Bahrain this week left a stain on the reputation of the Gulf state’s rulers that “will not be erased.”

Lapid on Thursday officially opened Israel’s embassy in Manama and met with top-ranking officials, a year after the two countries agreed to normalize diplomatic relations and in the first public visit by an Israeli minister since the agreement.

“We condemn any scheme that bolsters Israel’s destructive presence in the region,” Iranian Foreign Ministry spokesman Saeed Khatibzadeh said in a statement reported by the official IRNA news agency and cited by the Reuters news agency.

“This stain will not be erased from the reputation of Bahrain’s rulers. The people of the region will continue to oppose the process of normalization of ties with the Zionist regime,” he said.

During the historic visit, the Israeli foreign minister also met with U.S. naval personnel based in Bahrain. The country hosts the U.S. Fifth Fleet responsible for maintaining peace in the Persian Gulf, Red Sea, and Arabian Sea.

Iran’s national army began exercises on Friday near its border with Azerbaijan, state TV reported, putting on a display of military capabilities near a neighbor it is increasingly skeptical of for its ties to the West and Israel.

Artillery, drones and helicopters will participate in the drills, the report said, without elaborating on how long they would last or where exactly they would be held. Iran occasionally holds such events, saying it wants to assesses combat readiness and demonstrate capabilities.

The exercises come amid escalating tensions along the border. Iran is wary of Azerbaijan in particular for its deep military cooperation with the Islamic Republic’s archrival, Israel, and on Thursday voiced its concerns to Azerbaijani ambassador in Tehran Ali Alizadeh.

The baseless accusations come as Iran is blocking U.N. inspectors from accessing one of its key sites linked to its secret nuclear weapons program.

Amid Iran’s growing military threats and repeated nuclear violations, President Joe Biden is desperate to restore the Obama-era deal. “The Biden administration is imploring Iran to quickly return to talks on its nuclear program after a thee-month hiatus caused by its government transition, warning that the window for negotiations may soon close,” the Associated Press reported on Friday.

I thought Biden had put a stop to the Abraham accord.

From what I have read in commentary on the subject, dotard Xi-den (really his charperones/minders/handlers/caretakers/Obama cabal) is not going to lift a finger to help advance and solidify the Abraham Accords, but, he’s happy to reap the fruits of this undeniable and substantive diplomatic achievement, all without giving an ounce of credit to President Trump, naturally.

Good. F*ck ’em. I have a long memory. I never forgot the 1979 hostage taking. One of the saddest moments of my life was when I realized during one of my moves somehow I didn’t have the pic of planes belonging to my squadron over Chabahar. Aircraft to aircraft. On the landward side, mind you. We took that “Yankee Air Pirate” moniker seriously back then.

“OK, Iran, you say we can’t sail our carriers into your bath tub you call the Persian Gulf? Well guess what.”

We had a patch manufacturer in San Diego make up a bunch of Yankee Air Pirate patches and we installed them on our flight jackets. I’d show you mine except I ran out of money years ago and had to give it to a stripper.

That’ll teach me to carry memorabilia as opposed to a working debit card.

Yes, well, the sun also rose this morning and set this evening. And Iranian’s leadership is “angered.”