Resolution: Since the Rhode Island Association of School Committees “released correspondence indicating RIASC would cooperate with federal law enforcement to potentially adversely engage with our constituents …. [W]e will withhold our membership dues until further notice” 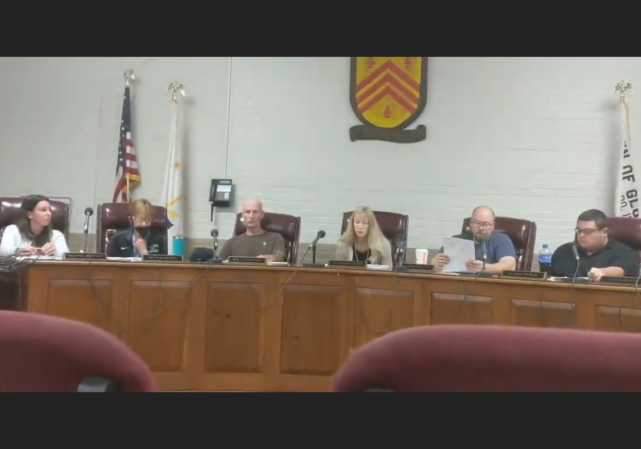 The Garland memo, wrapped in supposed concerns about violence, in fact was a political gesture in response to a letter from the National School Board Association (NSBA) which smeared the parent protest movement as “equivalent to a form of domestic terrorism and hate crimes.” The NSBA letter allegedly was a pre-arranged set up for the DOJ memo.

At least 17 state associations which are members of NSBA either have dropped membership, withheld dues, or otherwise protested NSBA’s letter to Garland.

But in Rhode Island, the state association moved quickly into action supporting the NSBA/DOJ/FBI targeting of the parent protest movement, as we covered in Garland Memo Fallout: RI Assoc. of School Committees To “Coordinate” With FBI And Gather Information On Public Meeting “Issues”.:

The Garland memo already has prompted action in Rhode Island to gather information on “issues” raised at school committee public meetings, confirming the concerns that lawful protest would be reported to the FBI and other law enforcement as part of this national monitoring effort.

The Rhode Island Association of School Committees (RIASC) acted on the Garland October 4 memo early in the morning of October 5.  On October 5, 2021, at 8:18 a.m., RIASC forwarded to local Rhode Island school committee officials an article from Politico about the Garland Memo, “Garland taps FBI in response to ‘disturbing spike’ in threats against educators.”

We have a copy of the email, sent to over a dozen local school committee officials, which states that RIASC would be contacting the U.S. Attorney for Rhode Island and the FBI to “coordinate with them” and asking that the officials report to him “any issues you have had during your Committee meetings” on certain topics.

RIASC will contact our US Attorney as well as the FBI and coordinate with them on what steps if any, we need to take.

In the interim, please apprise me of any issues you have had during your Committee meetings on topics such as mask mandates, issues with equity education, rights for LGBTQ, and BIOPC students.

Now there is backlash against RIASC. The Town of Glocester School Committee covers K-6 schools (higher grades are part of the regional Foster-Glouster district).

Last night, according to Laurie Gaddis Barrett, who drafted the resolution and was present during the committee meeting, the School Committee voted 6-0 to condemn the RIASC support for the NSBA letter demonizing parents:

Share my joy. In Rhode Island, the Glocester School Committee passed this resolution tonight 6-0. RIASC defunding in punishment for supporting NSBA action to label concerned parents as "domestic terrorists" & proactively engaging federal law enforcement action against us is ON. pic.twitter.com/smnOKmznF8

Legal Insurrection has obtained a signed copy of the Resolution, which provides:

WHEREAS, it is the Glocester School Committee’s responsibility to determine and control all policies affecting
the administration, maintenance and operation of the Glocester public schools, and shall have all the powers
and be subject to al! the duties as prescribed by the laws of the State, and

WHEREAS, the Glocester School Committee is a paid participating member of the RIASC, and

WHEREAS, on June 3, 2021 we received correspondence from the RIASC regarding certain APRA requests
made f n other school districts that later proved to be factually inaccurate, and

WHEREAS, on August 15, 2021 the RIASC did send correspondence to Gov. Dan McKee without our
know!edge or consent, and without seeking our input, requesting that the Governor issue a public school
universal mask mandate, and

WHEREAS, on August 20, 2021, during a professional development meeting, in an apparent defiance of
RIASC bylaws and IRS guidelines relating to 501 (c)3 regulations, RIASC allegedly pledged support for a
particular candidate in a recall election, and

WHEREAS, on October 5, 2021 in response to the National School Boards Association’s (NSBA) letter to the
Biden administration requesting federal assistance regarding threats and disruptive events occurring at School
Board meetings across the nation, RIASC immediately released correspondence indicating RIASC would
cooperate with federal law enforcement to potentially adversely engage with our constituents, and

WHEREAS, the Glocester School Committee was not consulted about the content of the October 5, 2021
correspondence and does not agree with this RIASC action, and

WHEREAS, we would be doing a disservice to our constituents if we did not evaluate the cost, benefit, and
reputational risk of our continued dues-paying membership in R!ASC,

BE IT THEREFORE RESOLVED that the Glocester School Committee expresses concerns surrounding
RIASC’s governance, leadership, transparency, and failure to embrace non-partisanship. We are aware of
numerous complaints about these issues that have gone unanswered. Due to the fact that we have not seen
the changes in operational method that we would have expected, nor have we received any promised plan or
timeline to accomplish these changes, we will withhold our membership dues until further notice.

Barrett sent me the following statement:

The takeaway is, any parent can write a resolution and ask for a member of their School Committee to sponsor it as an agenda item for consideration. I’m not really all that special, just a concerned parent who happens to be highly motivated against funding an organization like RIASC that seeks to engage Federal law enforcement agencies against me.

My commitment to getting the Resolution completed for consideration was solidified when, during a round table discussion on October 15, 2021 on WBLQ local radio, I asked Mr. Duffy directly: “A critic might say that your email to School Committee chairs indicating you would engage with the US Atty and FBI to coordinate with them on what steps needed to be taken was an example,Example of overreach, how would you respond to that?” And Mr. Duffy’s answer was that he had “First Amendment rights” to do so. I thought to myself, well, I’ve got First Amendment rights too and I’m going to exercise them.

We will follow how the pushback grows in Rhode Island.

This is turning into a national fight of epic proportion.

It comes to a basic question of whether the Schools have a right to indoctrinate (ie go beyond teaching academics and into aspects of political, social, racial and gender — areas when many families have differing ideas and perspectives).

Teachers and Administrators want full control of your kid’s mind for 6 to 8 hours a day. They think they have a right to teach whatever they want. Often – they do not even what to tell parents what they are teaching.
Parents say – teachers have no parental rights – we have exclusive right over our kids. In fact, the law makes parents fully responsible for minors up to 18.

Who will prevail ? Who has the right to decide for these helpless and impressionable kids ?
(a) Parents; or,
(b) Administrators, Teachers Unions and their sycophants ?

What say you ? . Reply with your vote and why.

I want to teach no values at all other than those which are necessary to maintain order in the room.

There are kids, many kids in some schools, that will be feral if not taught values by some teacher. I can’t think of a good solution to that tension.

The solution we had when I was in school is that the feral ones get shipped out to enable the others to continue to learn. The usual destination was Sockanosset. Kids knew that was a possibility. Life actually worked back then.

Wish we still could. Hell, a judge wouldn’t let us expel a kid that threatened rape in a bathroom and had to be forcibly restrained by other kids.

In my small rural Alabama community they have an ‘alternative school’ for kids that are disruptive to the education of other students. Basically if a student is an issue he gets suspended twice then goes to the alternative school for the remainder of the school year. Mess up there and off to Juvenile rehabilitation for six months run by former DI. That’s voluntary though as a diversion from Juvenile incarceration at the option of the CT and the parent/guardian must ask for this.

Up in the far North East we have an alternate school too. My nephew went there as the regular school just didn’t work for him for a variety of reasons. He graduated from it with a normal High School Diploma where if he had stayed in the public school he would have most likely dropped out.

The answer is easy. If you take the king’s coin, you must do the king’s bidding. “Free” public schooling is no different than government cheese. “If the service is free, you are the product.”

And, Ben–I object to your query on the ground that it is a compound question.
Who will prevail?? Well, the way things have been going recently, who knows. As for, “Who has the right to decide for these helpless and impressionable kids ?” I’m pretty sure that 99.44% of the Legal Insurrection commenters would say it’s the parents. Hillary Clinton would say its a village made up of “experts” that has the right.

“The Town of Glocester School Committee covers K-6 schools (higher grades are part of the regional Foster-Glouster district).”
Dammit.
I had a whole riff ready to go about “Dues are cancelled today on account of federal snow-job, at Foster-Glocester Regional High!”
Hoist a mug of Gansett to Salty Brine, RIP.
Brush your teeth and say your prayers, kids! Say g’night, Jeff! Arf!

LOL. Our heroes in Glocester, RI are working behind the scenes to bring back Snow Days after the Distance Learning debacle. There will be sledding on Durfee Hill again this year on snow days, pending 4-wheel drive and plowing situation.

No RIASC, Foster Glocester!
Glad you remembered “Brush your teeth and say your prayers”!!! I miss Salty.

Life in the snow capital of Rhode Island is good. If they get snow days reinstated, the next hill to climb is a townwide skating on the frozen ponds school holiday. The only requirement is 185 days of school. There’s no requirement when they have to happen. Not everyone hates winter.

Threaten funding/dues to these associations and taxpayers will get their attention. No school board must belong to these associations, it’s voluntary. When the membership becomes divisive the politicians scramble. They want to remain in office without any controversy that they can avoid or eliminate. The last thing they want is additional public scrutiny of exactly what they are spending money on.

Make membership in the teachers’ unions voluntary, too, and see what happens to them.

Membership in ANY public employees’ union has been entirely optional since the US Supreme Court’s 2018 JANUS decision. Any public employee, including teachers, can opt out of paying money tribute to unions. See the Freedom Foundation website.

As long as labor goons have doubled as “educators” it has been major league parental malpractice to even consider sending one’s children to the public schools.

What exactly does the NSBA and/or state groups like RIASB do and why do local school boards send them any money? How did this Duffy clown get a job and who hired him?