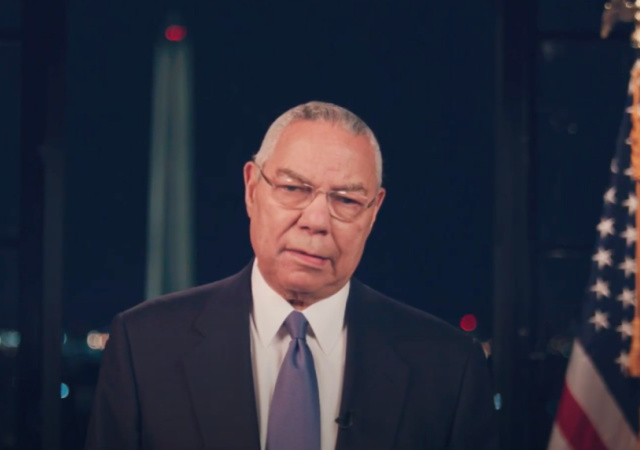 Former Secretary of State and chairman of the Joint Chiefs of Staff Colin Powell passed away on Monday morning from COVID complications.

He was fully vaccinated. We want to thank the medical staff at Walter Reed National Medical Center for their caring treatment. We have lost a remarkable and loving husband, father, grandfather and a great American.

Gen. Colin Powell has died due to complications from COVID-19, according to his family: pic.twitter.com/xp3gz59PJE

Powell served in the Vietnam War. He was injured twice.

He became the first black secretary of state under former President George W. Bush from 2001 to 2005.

Powell stopped calling himself a Republican in January 2021 after the so-called insurrection on January 6. But that started 12 years ago when he endorsed former President Barack Obama. He also spoke at the 2020 DNC.

Powell voted twice for Obama, once for Clinton-the bitchy one, and finally for Biden. As far as I’m concerned his final years saw him turn against his country only to get taken out by the Communist China flu.

Powell was a member of the CFR. Yeah, I too would say he turned against his country.

Well when he turned, at least he didn’t go full John McCain.

I won’t miss either, but 15 years from now, McCain will still be remembered as a petty vile man who happened to do something honorable earlier in his life.

Powell won’t be remembered much at all except as an swamp establishment figure over endless wars he didn’t have the will to win.

When they say “fully vaccinated,” what exactly does that mean?
Third shot?

It’s already obvious that the fake vaccines do diddly squat to protect us from the bio weapon, but I can see how the words “the booster shot killed Colin Powell” can really become a nightmare for Faux-Xi and company.

He had a kind of blood cancer that wiped out his immune system. This means a vaccine was close to useless. The flu, even a cold, would have been dangerous. Plus he was greatly more susceptible to getting such an infection compared to any healthy person.

To be specific, he had multiple myeloma (I had to look it up) which used to be a quite deadly disease, but now has been reduced to serious but can be lived with if given the proper treatment unless you catch something else etc.. He also had prostrate cancer in 2003, and early-stage Parkinson’s disease diagnosed recently (according to family sources). So whatever antibodies the C19 shot gave him were outmatched by his existing co-morbidities.

(I really expected the media to sort through his recent appointment book, looking for some vaccine-denying Trump supporter they could blame this on. Probably within the next few months.)

On the other hand, there is a vax video going viral that has a researcher showing destruction of a patient’s immune system (“very similar to AIDS”) as a direct result of the patient getting the vax. Who’s to say the vax didn’t push Powell over the edge?

But he was FULLY vaccinated. So, did the evil unvaccinated kill him?

Must’ve. What else could it be?

He died of grief and melancholia over January 6.
It was a very long and drawn-out process.
Nothing to do with the vax. Nothing at all.

Rest in peace. Sad when anyone dies.

At least now when the media brings out the Colin Powell voted for [fill in the blank] democrat in 2024 election; he will join the growing part of the electorate who voted notwithstanding they were dead!

Also, the vaccine didn’t seem to help him just saying….

“Just found out my dad voted for Biden in the last election and I’m really upset. He never would have done that if he were alive.”

sure the multiple myeloma had ZERO to do with it.
lets just say after the racist turned over his command at V Corps many many people were partying.

He was my Corps Commander back in the 1980s and I can assure you that none of us were please to see him leave. As a 1LT met this LTG because he cared to meet his junior officers. I question his politics since 2008, but never his service in Europe during the Cold War, in Viet Nam, or anywhere else he made his presence known.

He is the first person whose name I knew, that I know died from covid.

Ironic that he was also fully vaccinated, at least according to whatever standards they’re using for today.

They call it a Covid shot. He died of Covid. See? The shots work.

I am not going to engage in any hypocritical “speak no ill of the deceased” talk. Powell was one of the architects of the Forever Wars in Iraq and Afghanistan – wars that we ultimately lost at a huge cost of American lives. That fact that he was a racist grifter who tried to work both sides of the political street only makes it worse. Like most modern American generals Powell was loyal only to himself.

wish i could give you more than one upvote

Same here. I’m on your coat tail, or at least your tail.

I just got the word today. With qualifications, my cancer has not metastasized that we know of. There will be some further tests, but the evidence so far is good. I get the stitches out tomorrow and the surgeon and I discussed for the surgery.

That is good news! I’m pulling for you.

You are such a flirt 😉

Fuzzy, what are you doing for dinner Saturday?

Glad to hear it.

True. He rebelled against one swamp to run to the bosom of an even more treasonous swamp.

We won those wars. Then 0bama and Biden threw the victories away.

But still won them, they are quick to remind us.

Powell tutored Hillary on evading the Freedom of Information Act, and he kept a private server to avoid public disclosures.

Another high profile example of a person in a high risk category for severe outcomes from Covid, elderly, succumbing to Covid despite the vax. The examples will continue to pile up. Those with weak immune systems remain at elevated risk even with the vax. Sooner or later more and more people will realize this fact.

if a vaccine is 95% effective, 5% of recipients still succumb

Likely a case of dying “with” and not “from” WuFlu. Nothing has changed. It selectively kills older people and those with severe co-morbid conditions, most of which would have killed the individual within a year anyway. WuFlu just gives them a little push as they are standing at the edge of the cliff.

At any time in the past we could have filled up every available ICU bed with those who had severe influenza had there been a political directive from above to do so. Because medicine is now mostly a division of government we simply will not experience any deviation in thought and practice. ICU docs are loving it, because rather than having really sick people, they now have someone with a case of the advanced sniffles and their entire duty cycle involves flipping said person every 4 hours. They are using the ICU beds because those rooms have a positive-pressure ventilator. Put one of those in any hospital room and you have another bed suitable for WuFlu care. ICU just sounds so much more dramatic, and the state saves money by putting off more expensive procedures which do require ICU post-op care.

Going value of putting someone on a vent is about $37K. Recent relative on vent for a few hours before dying from ??covid??… so quite the haul for the hospital. Same with hospice when on Medicare…

The safe haven for the politically fading is to go Left. As for the above noted “Forever Wars”… Powell argued to let Sadam’s forces escape after the “Highway of Death” which only served to maintain his army for the Second Gulf War. As for nation building… the old saying fits..”you can’t polish a turd”.

So… “complications from covid”…. quite the open ended comment. Third jab killed him? Vaccinations critically wiped his already compromised immune system? Bleed? Clots?? Whatever…. I find it most interesting that “covid” was mentioned along with fully vaccinated..setting the stage?

For all the accolades he’ll receive, I’ll always remember him as the guy who said in a leaked email in 2016 that Bill Clinton is still “dicking bimbos” and his wife “screws up” everything.

Yet he turned against Republicans to support that crew.

Or as Porky Pig used to say, “That’s all Folks!”

Between March and April 2020, 84 elderly patients with suspected COVID-19 living in two nursing homes of Yepes, Toledo (Spain) were treated early with antihistamines (dexchlorpheniramine, cetirizine or loratadine), adding azithromycin in the 25 symptomatic cases…. The mean age of our population was 85 and 48% were over 80 years old. No hospital admissions, deaths, nor adverse drug effects were reported in our patient population. By the end of June, 100% of the residents had positive serology for COVID-19.

Planned Parent/hood was neither an exclusive nor a good Choice.

Section 6 Conclusions has a line that tells you exactly how far this idea will get and it’s very telling with the modern healthcare system of either insurance or government fitting the bill. “As there are no commercial interests, they should be promoted by national health systems as a social responsibility.” As there are no commercial interests… really says it all for this pandemic.

A dramatic effect with an over the counter drug used safely for over 40 years in people… persons.

I’m not alone in my admiration for India. The RN named one of their finest after an Indian city. They didn’t know she was their finest. Not until the smoke cleared after she came across the Nazi Scharnhorst and Gneisenau.

“We’ll fight them both, they’ll sink us, and that will be that. Good-bye”.

I believe I mentioned one of the most bad @$$ last stands in history, since we (at least I) just celebrated the anniversary.

And, no, I really don’t need the attention. I did just buy a tulwar. I always hope to be worthy of my blades. If anyone is interested I can share the finer fighting points of the tulwar as opposed to other swords, and to the axe for that matter. I always had to be conscious of these things because the odds of the Navy issuing me a gun were like next to nothing. But I can go into a hardware store in Malaysia and buy a shovel.

“He was fully vaccinated”

I find this a strange thing to lead with. Who gives a damn? Enough with the posthumous virtue signaling. I approve of their sabotage of the narrative we are not permitted to question (that these vaccines are oh so perfectly effective), somebody wasn’t thinking when they issued this press release.

The astounding part of this story is the media immediately concluded that booster shots work, or would have worked in this case. They offer no evidence that he did or did not receive a booster shot, or that he was indeed eligible for a booster shot. We are being led by liars desperate to maintain a narrative at all costs.

This was a man who was one of the most distinguished soldiers in recent memory.
Can we not simply mourn his loss and celebrate his life and service without turning him into a political football?
I am disappointed in you all.